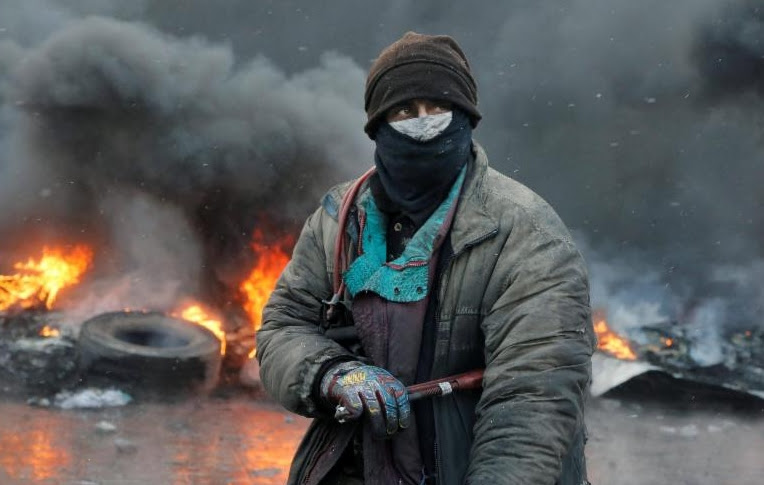 Ukraine is burning, it is going to the dogs; it has been taken over by an illegitimate government engorged with fascists, neo-Nazis and simple pro-Western opportunists, as well as countless EU and US-sponsored members of various NGO’s.
The West has destabilized an entire nation, supporting right-wingers and fascists. Then it began spreading anti-Russian propaganda, even before Crimea had voted to join its historic homeland.
Everything was well planned, with Machiavellian precision. The EU was hoping to get its hands on the abundant natural resources, heavy industry and a well-educated and cheap labor force. In exchange, it was willing to give… nothing. No sane government would be willing to accept such a deal. Therefore, the only way to push through its agenda, the West began supporting violence and terror, as well as the fascist, neo-Nazi groups. A similar approach is being used by the US and EU in Venezuela, Syria and even Thailand.
Just a few days ago, I concluded my 2,000-kilometer drive, from Kiev to Odessa, and then to the border with Transnistria and Kharkov. I visited destroyed and abandoned villages – a result of the ‘collapse of the Soviet Union’ and Ukrainian flirtation with the market economy, its obedience to the IMF and World Bank. I spoke to workers at an enormous steel plant in Krivoi Rog, located in the country’s industrial heartland. I met several leading intellectuals at the university city of Kharkiv, and I stood on the Ukrainian-Russian border, observing and photographing several Ukrainian tanks and armored vehicles.
All that I witnessed will be included in my in-depth report, which will be published, next week, in CounterPunch.
But right now, I would like to share some images with our readers. Those that I took, and those taken by two brave Ukrainian reporters: Andriy Manchuk and Andrey Nedzelnitsky.
I took the photographs very recently, this week and last week, while both Manchuk and Nedzelnitsky worked in Kiev in January and February 2014.
Andriy Manchuk wrote for this photo essay:

The photos were taken by me, and by the Kiev-based activist Andrey Nedzelnitsky, between January & March 2014, during the armed political confrontations in the center of the capital. I took some photos on 19th January, and 18th-20th February, in the periods when the intensification of events were at their peak. During those days, supporters of the opposition backed by the EU and US turned to violence, with the EU and US directing attempts to seize power. The result of these actions was the establishment of a new government – a coalition of neoliberals and ultra-right politicians, as well as the unleashing of a rightwing terror campaign – unseen in the history of independent Ukraine.
You can see in the photo series, the most significant moments of the last three months in Ukraine: the violent clashes between units of rightwing football fans and far-right militants and the police; burning barricades, marches by far-right paramilitaries with Nazi symbols, the moments of the demolition of the monuments to communists, and participants of the workers uprising of 1918, the public desecration of the communist red flag seized by the neo-Nazis in the offices of the Communists Party of Ukraine. You can also see the moment of the brutal assault and beating up of the anti-Maidan supporters – it took place on the Maidan itself and as a result of my work, the right-wing fighters grabbed my camera. There is also one photo of Arseniy Yatsenyuk – the current acting PM of Ukraine – who recently met with President Obama in Washington, and negotiated the possibility of obtaining loans while agreeing to implement brutal anti-social, neoliberal reforms that will affect millions of Ukrainian citizens. This was the very price of the victory of the rightwing and neoliberal politicians that organized and controlled the Euro-Maidan movement.”

The photos of my Ukrainian comrades were mainly taken by their mobile phones, as cameras were often destroyed or ‘confiscated’ by those self-proclaimed and later glorified by Western media, pro-European ‘democrats’.
The maliciousness and brutality of the Empire, the propaganda and lies that the mass media are spreading, are reaching top gear. They are increasingly determined, but also progressively primitive and desperate. It must be obvious even to a child that the Emperor is naked!
Photos: Andre Vltchek, Andriy Manchuk and Andrey Nedzelnitsky:

Right-wingers are proud of this.

Police protecting courthouse where left-wing, anti-government activist is being tried.

Kharkiv is anti-Western, pro-Russian and pro-Soviet.

Fascism and religion hand in hand.

EU is interested – an oil rig in central Ukraine.

Advertisement used by snipers to tune up their weapons.

What is left of a Ukrainian village.

Two Maidan protesters in the time of calm.

Maidan protesters brutally beating up a man they accused of supporting the government.

Right-wingers are encouraging passers-by to clen their shoes with a banner of the Communist Party of Ukraine.