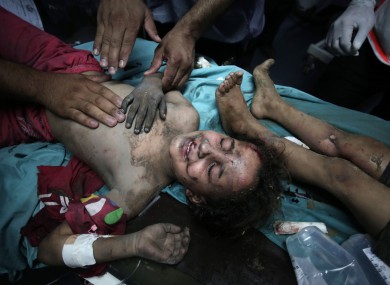 Massacre of Palestinians at a UN School

The massacre of 16 people—with a hundred more injured—in the courtyard of a UN school in Gaza on July 24 was yet another escalation of Israel’s genocidal assault on the Palestinian people in Gaza.

Watch video of Israel’s attack on the UN school in Beit Hanoun:nyti.ms/1ny382o

The assault began with Israeli air attacks on July 8. At this writing, nearly a thousand Palestinians have been slaughtered by Israeli tanks, missiles, and bombs. Large sections of Gaza—a massive outdoor prison as densely populated as New York City—have been reduced to rubble. Homes, hospitals, schools—destroyed. At least a fifth of the deaths have been children. And Israel escalated this slaughter with a ground invasion launched July 17. On July 24, Israel bombed the UN-run elementary school in Beit Hanoun, as part of a massacre that has–so far–murdered over 1,000 Palestinian people in Gaza. Israel announced in advance that it would bomb the school, forcing UN staff and refugees to seek other shelter. Top: families gather in the school’s outdoor courtyard on July 24 in hopes of moving to a safer location. Bottom: Israel’s attack left sixteen people dead and a hundred wounded-survivors were taken to overwhelmed medical facilities that have been severely crippled by Israeli attacks. Photos: AP On Thursday, July 24, the UN-run elementary school in Beit Hanoun was packed with hundreds of Palestinian evacuees seeking shelter under UN protection. UN representatives carefully monitored the school and kept in close touch with the Israeli authorities. The UN repeatedly certified the school was not being used by combatants or to store Palestinian weapons.

Nevertheless, on July 21, Israel sent “warnings” that the school would be targeted for attack. Israel has issued such warnings less than a minute before it bombs people in homes, offices, hospitals, and shelters (see “Historian Ilan Pappé: Author of The Ethnic Cleansing of Palestine”). But the people in the school had nowhere else to go.

Tension in the school mounted. The UN evacuated their personnel, leaving hundreds of people behind. On July 24, word spread among those huddled in the school that they were to be evacuated to a safer place. People gathered up their meager possessions and lined up in the courtyard.

That was when the rockets hit.

Sixteen people were killed on the spot, a hundred more wounded, including women, children and infants. Moments later, the courtyard was empty, the ground pooled with blood. Spilled food, abandoned shoes, bloody bandages, overturned desks and scattered books can be seen in a video captured from the massacre (see video at http://nyti.ms/1ny382o). Survivors were rushed to Gaza’s hopelessly overwhelmed hospitals and makeshift clinics.

A History of School Massacres in Gaza

Israel’s powerful military machine has “world class” technology for carrying out and meticulously recording death and destruction. In this case, Israel’s military spokesman would only say “there was a possibility” that the powerful shells that massacred people in the school courtyard came from Israeli forces.

That would be entirely consistent with Israel’s record and current practice of mass murder of Palestinian civilians in Gaza including in schools. Before July 20, Israel bombed three other UN schools where people were seeking shelter. Some 150,000 people are huddling in UN schools in Gaza in the hope Israel will feel some constraint in slaughtering them there.

The head of the UN schools program in Gaza told the New York Times that in other instances when UN schools had been bombed, he was “certain” that Israel was responsible. Survivors of the attack on July 24, and doctors who treated them, all say the rockets were Israeli. One survivor told the Times,“We had no resistance at all in the area.” Meaning there is no basis for “errant rockets” from Hamas to have hit the school, and no excuse for Israel to have attacked the school.

If systematically murdering desperate women, children, and other refugees who have taken shelter at UN schools isn’t a war crime, what is?!

The whole world is watching.

Last week, I wrote: “There is a basic question of right and wrong here. Everyone needs to be challenged to confront reality and struggle to stop the “incremental genocide” and ongoing ethnic cleansing being implemented in an extreme way right now against the Palestinian people in Gaza.”

The Israeli assault on Gaza must STOP NOW!