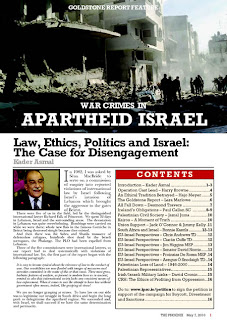 Phoenix magazine, the Irish equivalent of Private Eye in Britain, but far more influential, has come out in support of Palestine in their latest issue. By this I don’t mean that they have issued an editorial or article in support of Palestine, they’ve done more. Much, much more.
To quote from the IPSC press release:

‘Thursday 20th May 2010, saw the publication of a landmark document, a 16-page full colour feature entitled Goldstone Report Feature: War Crimes in Apartheid Israel. The document features contributions from many leading anti-apartheid campaigners, trade unionists, politicians, journalists and other public figures, including Kader Asmal, Col. Desmond Travers, Minister Ciaran Cuffe and Jamal Juma.
‘Coming bundled with the May 20th edition of Phoenix magazine, the booklet is notable not only for the range of it’s contributers, but also for the fact that it features Irish politicians from all the Dail parties calling for sanctions against Israel – chiefly the suspension of Israel from the Euro-Med Agreement.’
To explain the names first – Kadar Asmal is famous in Ireland for heading up the anti-Apartheid campaign he later returned to South Africa to become a govt. minister, Col. Travers is an Irish member of the Goldstone commission, Ciaran Cuffe is a junior minister with the Green Party, and Jamal Juma is the head of the Stop the Wall campaign in Palestine.
The supplement was produced in close co-operation with the Ireland-Palestine Solidarity Campaign (IPSC) and it is significant. While most media in Ireland tend to say they’re neutral while peddling a slightly pro-Israel line for fear of retaliation from the Israeli embassy, Phoenix has never hidden its support for Palestine. In almost every issue there is some exposee of government or other dealings with Israel.
This type of reporting has made the magazine unpopular (and widely-read) among the powerful in this country, so it was a considerable achievement to have representatives from all parties contribute to this IPSC supplement and to support some type of sanctions against Israel, however soft the sanctions. It shows that there is a level of broad cross-party support for Palestine and for sanctioning Israel for its war crimes. This helps move the debate in Ireland along from ‘Should Israel be acting the way it is?’ to ‘What can we do to stop Israel acting the way it is?’. Kudos to Phoenix and all the contributors.