Israel’s war on children in Gaza

Any attack on the civilian population in Gaza is an attack on children, where 40% of the population are 14-years-old and younger. 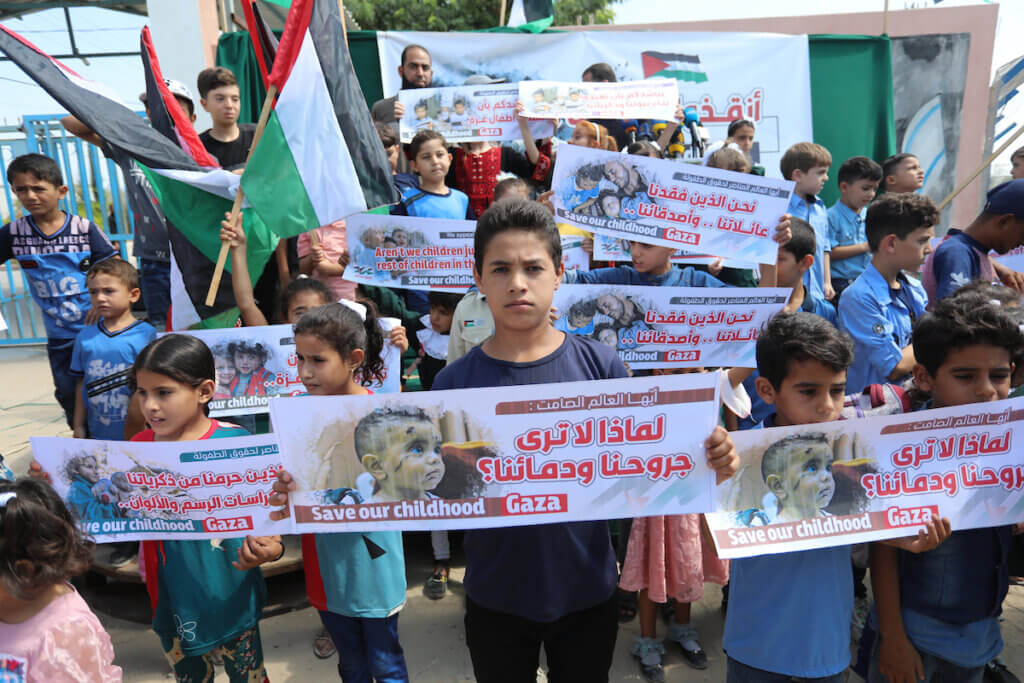 PALESTINIAN CHILDREN TAKE PART IN A PROTEST AGAINST THE ISRAELI BLOCKADE ON GAZA STRIP, IN FRONT OF EREZ CROSSING, IN BEIT HANOUN IN THE NORTHERN GAZA STRIP ON AUGUST 24, 2021. (PHOTO: ASHRAF AMRA/APA IMAGES)

“If there is a hell on Earth, it is the lives of children of Gaza.” – António Guterres, the UN Secretary General

Seven years ago, August 26, 2014, marked the end of one of Israel’s wars on Gaza, named by Israel as Operation Protective Edge. The 50-day attack left Gaza’s infrastructure in shambles and over 2,100 Palestinians killed.

The one statistic that can hardly escape one’s memory is the toll this operation had on Palestinian children: over 520 – almost a quarter of all the Gazans killed – were children under the age of 18.

You might even remember that four of them were killed by an Israeli airstrike while playing on the beach, in daylight, literally in front of international media members. “The soldiers believed that the children were Hamas fighters”, was the conclusion of an army investigating its own crimes.

These crimes are both appalling and hardly surprising. In Palestine 38.4% of the population are kids ages 14 and under, a figure that rises to over 40% in Gaza. Any attack on the civilian population also becomes an attack on children. Some attacks, like the ones documented and submitted to the UN by Defense for Children International Palestine, “suggest direct targeting [of children] by Israeli forces.”

Seven years after Protective Edge, we find Gaza and its children living in conditions that are even more dire than before. The trauma inflicted by Israel’s attacks and by its total siege on the region continues. In fact, it is unfolding as we speak.

A 13-year-old Gazan boy shot in the head by an Israeli sniper: currently in a critical condition, he is one of the dozens of wounded protestors who had gathered by Israel’s border with Gaza on August 21, 2021.

Hundreds of Palestinians have been gathering along the border for the past weeks, protesting the devastation that Israel’s 15-year siege has inflicted on the region. So far, Israel’s response has been live ammunition, tear gas, and bombings. If there is a place where bombs are occasionally dropped by an occupying force on a besieged population as a response to “incendiary balloons”, that is Gaza.

Israel’s response to what’s happening at the Gaza border these days draws parallels to the March 2018 – December 2019 weekly border demonstrations, also known as the Great March of Return.

According to a report by the UN Office for the Coordination of Humanitarian Affairs (OCHA), Israel responded to this series of protests with gas canisters (including dropped by drones), rubber bullets, and live ammunition, mostly by snipers. This killed 214 Palestinians, including 46 children, and injured over 36,100, including nearly 8,800 children.

Almost a quarter of a million children in need of psychosocial support, and 53.5% of children suffering from PTSD.  That is how dire the situation was in 2020, at the time this report was published. In other words, this was before May 2021.

This May, any children of Gaza born before 2008 would witness the fourth war in their lifetime. Israeli forces had been storming Al-Aqsa daily, and in response, Hamas issued an ultimatum asking for violence at Al-Aqsa and the neighborhood of Sheik Jarrah to stop. When these conditions weren’t met, they started launching rockets towards Israel.

It was with Hamas’ rockets that the mainstream media picked up the narrative, portraying the conflict as one in which Israel was the victim. But Israel’s ensuing bombings of Gaza destroyed this narrative. Videos of civilian homes being bombed appeared on the news, stories of parents stuck under the rubble, not being able to help their dying children – and vice versa – flooded social media.

Prominent international organizations documented the impacts of the war as it was unfolding. The Norwegian Refugee Council reported that 11 children who were part of its trauma relief program “were killed in their homes in densely populated areas along with countless other relatives who died or received injuries.” Palestinian Children’s Relief Fund, an NGO providing free medical care to children, reported that their offices were destroyed in an airstrike.

Doctors Without Borders reported that Israeli airstrikes launched on just a single day, May 16, 2021, killed 42 people, including 10 children, and hit their trauma and burns care clinic, which was forced to close. After having investigated the May 2021 attacks, Human Rights Watch concluded that both sides – the Israeli forces and Hamas – committed war crimes.

Yet cold statements and faceless statistics of children killed, gruesome as they are, don’t answer one major question: what’s awaiting the children of Gaza who survived?

When medical facilities, educational facilities, and even organizations providing psychosocial support are attacked and their work is disrupted, how can any healing start? And how profound can that healing be when the underlying conditions – the blockade itself – is still in place?

In a recent interview on Israel and Palestine, Gábor Mate, a physician and renowned trauma expert, recalls talking to a therapist who works with Palestinian children in the West Bank after they had been detained and kept in Israeli jails, sometimes for months without seeing their families.

“She says we don’t have post-traumatic stress disorder here because the trauma is never paused. The trauma is daily.”

Not only in the West Bank, where Palestinian kids seem to be killed by Israeli forces on a weekly basis, but in Gaza, too, it is clear that the trauma is continuous.

From impunity to mass action

In the last seven years, instead of any significant reconstruction and healing, we saw even more destruction and despair in Gaza. Palestinian children are still being subjected to a range of human rights violations. Collective punishment – a crime to which Israel’s siege on Gaza amounts -includes the youngest members of the population punished.

So how do we affect change?

In 2014, over 500 children killed and a besieged territory further destroyed did not result in any significant international condemnation and pressure on Israel. No meaningful sanctions were strengthened or even imposed.  Israeli diplomats weren’t expelled internationally, nor was Israel removed from major trade treaties.

However, the war in May – perhaps because of how extensively documented it was – produced a wave of protests all over the world.  Even The New York Times made a historic move by publishing the photos of all the Palestinian children killed by the Israeli forces during its attacks.

Yet the situation in Gaza won’t improve on its own.

Without pressure on the Israeli government and the U.S., its major supporter in terms of military aid and blocking of UN resolutions, it is difficult to imagine anything improving for the children of Gaza. Israel’s new Prime Minister, Naftali Bennet, is  meeting with Joe Biden this week to discuss further cooperation between the two countries.

What Gaza needs is the opposite of that cooperation. And it needs massive action.The good news in this gloomy situation is that instead of feeling overwhelmed, there are a number of actions we can take. We take them so that, to use the language of the UN Secretary General, the lives of the children of Gaza stop resembling a hell on Earth.