Home » Post Page » Is Zionism is the practical application of Judaism ?

Zionism is the practical application of Judaism.

•  1948, Israel’s Birth Myths, the “New Historians”, and the Palestinian Nakba

•  Israel, a Haven for Criminals

The Jews are implementing their religious duties according to the Jewish Bible, the Torah, and the International Zionist Movement is their prime instrument. During the years their strategies at times have been revealed, often by themselves. Studying these strategies one realizes the degree of cynicism and the powerhunger of these fundamentalists. Studying Zionist strategies also aids in understanding and predicting their present schemes and plots against World Peace.

“And I will stir up Egyptian against Egyptian – brother will fight against brother,
neighbour against neighbour, city against city, kingdom against kingdom.”

While the Zionist infiltrated and Jew-owned medias in the West are portraying a “Muslim” global threat, the Jewish state of Israel continues to fill its depots with the most horrendous of weapons, without any insight and restriction, targeting these weapons against some of the biggest civilian population centers in the world.

Since obtaining the nuclear bomb, sometimes in the 1960s, Israel has, at least implicitly, threatened the U.S. to use it as a mean to pressure the latter to allow Israel a FULL access to its arsenal of legal and illegal conventional weapons. President Johnson (in addition to evading opening an investigation on the USS Liberty incident), may have concealed the theft of American enriched uranium for use in the construction of nuclear weapons in Israel. (– See Dangerous Liaison by A&L Cockburn, 1991)

As it appeared in the Jewish Telegraphic Agency (10/07/1998):
“Israeli F-16 fighter jets are carrying biological and chemical weapons manufactured at a secret plant near Tel Aviv, according to the Sunday Times of London. Israel denies that the plant at Nes Ziona manufactures such weapons. The report comes after Israel acknowledged last week that an El Al plane which crashed in Amsterdam in 1992 was carrying a chemical that can be used to make nerve gas.”

On Israel’s theft of U.S. uranium:

“.. at least 206 pounds of highly enriched uranium has disappeared from the Apollo [Pennsylvania] plant…”. “In July 1977 Congressman Morris Udall, chairman of the House Interior Committee, convened hearings and forthrightly billed the Apollo affair as a scandal in the same league with Watergate, Koreagate, and My lai.”

“.. the agency [CIA] had managed to obtain a sample of highly enriched Uranium from Israel. The chemical “signature” specifically identified it as uranium that had been enriched at the U.S. enrichment plant at Portsmouth, Ohio, which was where NUMEC’s [the Pennsylvania Plant] enriched uranium came from.”— pp 73, 79, A & L Cockburn, Dangerous Liaison (1991)

On the killing of Egyptian POW:s in the 1967 war, see our section on Jewish terrorism.

See the Lebanon section for the massacres of Sabra and Chatila.

“A monstrous war crime that Israel has tried to cover up for a fortnight has finally been exposed. Its troops have caused devastation in the centre of the Jenin refugee camp, reached yesterday by The Independent, where thousands of people are still living amid the ruins. . . . The sweet and ghastly smell of rotting human corpses is everywhere, evidence that it is a human tomb. The people who spent days hiding in basements crowded into single rooms as the rockets pounded in say there are hundreds of corpses entombed beneath the dust, under a field of debris, criss-crossed with tank and bulldozer treadmarks. . . . A quiet, sad-looking young man . . . led us across the wasteland, littered now with the detritus of what were once households, foam rubber, torn clothes, shoes, tin cans, children’s toys. He suddenly stopped. This was a mass grave, he said, pointing. . . . We could not see the bodies, but we could smell them. . . . Until two weeks ago there were several hundred tightly packed homes in this neighbourhood . . . . They no longer exist. Around the central ruins there are many hundreds of half-wrecked homes. Much of the camp — once home to 15,000 Palestinian refugees from the 1948 war — is falling down. Every wall is speckled and torn with bullet holes and shrapnel, testimony of the awesome, random firepower of Cobra and Apache helicopters that hovered over the camp. Building after building has been torn apart, their contents . . . spewed out into the road. Every other building bears the giant, charred impact mark of a helicopter missile. Last night there were still many families and weeping children living amid the ruins, cut off from humanitarian aid. Ominously, we found no wounded . . . . Israel was still trying to, conceal these scenes yesterday. It had refused entry to Red Cross ambulances for nearly a week, in violation of the Geneva Convention. Yesterday it continued to try to keep us out. . . . Hidden, whispering people directed us through narrow alleys they thought were clear. When there were soldiers about, a finger would raise in warning, or a hand waved us back. We were welcomed by people desperate to tell what had happened. They spoke of executions and bulldozers wrecking homes with people inside. . . . Rajib Ahmed, from the Palestinian Energy Authority, came to try to repair the power lines. He was trembling with fury and shock. ‘This is mass murder. . . . ‘ All had the same message: tell the world.”

See our special section on Lebanon.

In spite of the Jewish global media’s strenuous efforts to justify the perverse State Terrorism perpetrated by Israel against the people of Palestine in Gaza, repeating time and again that it is all a question of understandable “Israeli reaction” against “Palestinian terrorism”, that Hamas is a “terrorist organization”, that “Israeli patience is over” and that the current violence is all the “Palestinian’s fault”, in spite of the information black-out the Sad Truth is coming out daily:

The Terrorist State of Israel is committing yet another act of genocide and gross violation of human rights against the Palestinians whom they expelled from their thousand-year homeland over sixty years ago, illegally occupying Palestinian territory in violation of UN Resolutions and in spite of the clamor of the saner part of world opinion. Israel can do this thanks to the absolute support and full backing they get from Zionist controlled United States, the passivity of European governments, and the outright treachery of the decadent regimes in Egypt, Saudi Arabia, Kuwait, and other Western-controlled Arab countries.

More on settlements under the Barak government in thePeace Processsection.

See our section on Jews and Crime which documents Israel as a center of drug smuggling, money laundering, illegal organ trafficking, so valled “White slavery” and trafficking, piracy and arms exporting (smuggling). 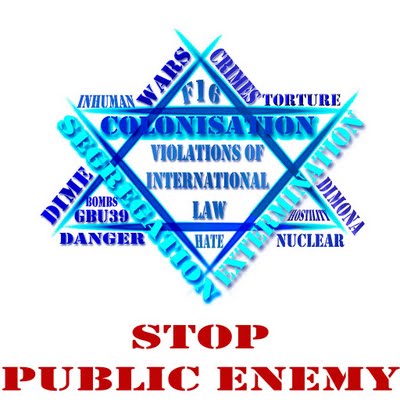 Other archives on Zionism and the occupation of Palestine: