Home » Post Page » US Intel. Will Bring Assange to US in Chains

It appears increasingly likely Wikileaks founder and publisher Julian Assange will wind up in the clutches of the U.S. government, says Ann Garrison. 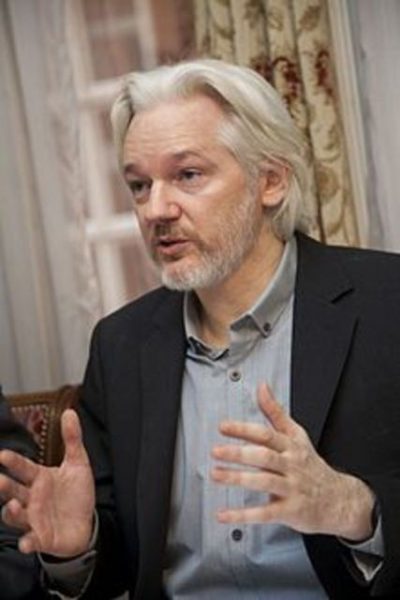 It appears increasingly likely Wikileaks founder and publisher Julian Assange will wind up in the clutches of the U.S. government.
It’s hardly surprising, given that in ten years’ time, Wikileaks published more classified information than all other media combined. It exposed human rights abuses, government spying, torture, and war crimes on an unprecedented scale.
WikiLeaks put government, corporations and even the Pentagon, the FBI, the CIA and other intel agencies on notice that they could no longer count on operating in secret.
It created a trove of primary source material that serious journalists and researchers will mine for years to come. Its publications are accessible to readers who prefer primary sources to mostly mediated news.
Wikileaks so infuriates the USA’s most violent, corrupt, and criminal institutions that Hillary Clinton half-jokingly suggested drone-bombing Assange. Other U.S. politicians called for his execution by other means.
California’s 28th District Congressman Adam Schiff, who became the chair of the House Intelligence Committee when Democrats reclaimed the House, said he would speak to Assange “when he is in U.S. custody, not before.”
Schiff is a vociferous and supremely self-righteous leader of the Democratic Party’s “Resistance,” which sullies the name of the underground movement formed in France during World War II to fight Nazi Germany’s occupying forces and the collaborationist Vichy government.
The “Resistance” tolerates only one truth and one loyalty: Russia is the enemy, interfering in Syria, the Ukraine and even U.S. elections. Russia elected Trump with Wikileaks’ help, it says. Russia dares to position missiles on its own borders, it says, to respond to NATO’s missiles on the other side. The U.S. must build more missiles, more drones, more nuclear weapons, and every other sort of weapon to defend the European world against Russia and its ally China.
Moral and Racial Superiority
Moral and racial superiority entitles the U.S. to occupy the world with military bases, ringing any nation that challenges its hegemony with military aircraft, battleships, assault vehicles, and military surveillance. Moral and racial superiority entitles its spy state agencies to shut down access to information deviating from its narratives and therefore to arrest and extradite Julian Assange.

The Meaning of Assange’s Persecution

The Republican Party shares the same supremely intolerant nature as the Democrats, but differentiates itself by insisting that, although Russia is the enemy, Donald Trump did not collude with Russia to steal the 2016 presidential election.
The Republicans also want to silence the founder of Wikileaks and find a way to shut the organization down. Trump’s former CIA director, and now Secretary of State Mike Pompeo, has called Wikileaks a “non-state hostile intelligence service often abetted by state actors like Russia” and vowed to hunt Assange down.
Has Time Run Out?
Assange has been an asylee in Ecuador’s London Embassy for more than six years—since August 2012. Ecuador and the UK, however, are no closer to an agreement that would allow him safe passage out of the embassy. In a recent video conference, #Unity4J organizer Suzie Dawson said she fears Assange and those working to free him are running out of time:

“Right now time is not on our side. And I had someone today complaining because they want us to do a big, big action day march. When you do those types of actions it takes two or three months to organize. You need to have an organizing committee, you need to wallpaper the town, you need to have one date that you do it on, you need to do a ton of advertising. You need to get all the unions and various other organizations to sign on board, and then you have this one action day.
“Well, there’s a couple of problems with that. First of all, I don’t think we have three months right now. If we schedule a February giant march in support of Julian, I honestly don’t think we have until February. I hope I’m wrong. I hope that the actions we take in the short term, in the next days and weeks, will buy us that much time for Julian, but I don’t see it.”

CIA whistleblower John Kiriakou, who spent two years in prison for exposing the agency’s official use of torture, said if Assange walks out of the embassy without a guarantee of safe passage, he will be extradited to the U.S. in chains:

Dawson feels the FBI and CIA will interrogate and torture Assange to try to obtain information that would allow them to bring Wikileaks down. She has no doubt he’s been preparing for this eventuality for years. She believes he will have made sure the organization has adopted security codes and measures he himself doesn’t know and therefore can’t reveal—even if he’s tortured.

“They want to know about security files for example. They want to know about the inner processes and workings of Wikileaks. They want access to the knowledge that’s inside Julian’s brain. And they will torture him. And they will interrogate him in order to attempt to get that.
“Now I trust Julian to be smart enough to have made sure that even he doesn’t possess a lot of that knowledge. In my personal opinion, Julian has spent years planning for these various eventualities, but it won’t stop them from trying.”

Dawson aded intelligence agencies are eager to punish him: “At the end of the day they want to punish him for outing their corruption and their crimes. They’ve been waiting eight years to do it, and they will be rubbing their hands together with glee at the prospect of the UK detaining him and extraditing him to the USA.”