Report also condemns Houthi recruitment of child soldiers, but does not explore role of the US and UK in supplying arms to Saudi-led coalition 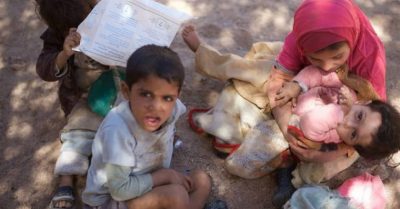 Note to readers: please click the share buttons above
A group of UN experts has said that Saudi and Emirati forces may have committed war crimes in Yemen.
A report launched on Tuesday by the Group of Eminent Experts on Yemen (YemenGEE) established in 2017 by the UN High Commissioner for Human Rights, concluded that individuals in the governments of Yemen, Saudi Arabia and the United Arab Emirates (UAE) could be prosecuted for acts that amount to international crimes “subject to determination by an independent and competent court”.

The report comes as US officials have expressed concerns over recent deadly air strikes, with the Pentagon reportedly warning Saudi Arabia that it is prepared to cut its support to the Saudi-led coalition if it continues to target civilians.
According to evidence gathered by YemenGEE, some attacks and actions by the coalition and the Yemeni government have violated “the principles of distinction, proportionality and precaution”, including the imposition of a naval and air blockade on Yemen since March 2015.

“There is little evidence of any attempt by parties to the conflict to minimise civilian casualties. I call on them to prioritise human dignity in this forgotten conflict,” said Kamel Jendoubi, chairperson of YemenGEE.

Based on interviews with victims and witnesses, the group found that the UAE and its allied Yemeni security forces have committed acts of rape and sexual violence against vulnerable groups.
In March 2018, the panel said that 200 male detainees were subjected to anal examinations and rape with tools and sticks by UAE personnel at Bir Ahmed prison in southern Yemen.
The report attributed two-thirds of 842 verified cases of recruitment of children in 2017 to the Houthi forces. In some cases, children as young as eight were conscripted to take part in hostilities.
A Saudi coalition spokesman told Reuters on Tuesday that the UN report had been referred to the coalition’s legal team.
The findings were released a day after top US military commander in the Middle East Lieutenant General Jeffrey Harrigian expressed “frustration” at a recent coalition air strike that killed 40 children in Yemen, using US-supplied bombs.

“Clearly, we’re concerned about civilian casualties, and they know about our concern,” he told the New York Times. “The key here is to take appropriate action.”

Meanwhile, the Pentagon has warned Saudi Arabia that the US is prepared to cut its military and intelligence support to the coalition if it continues to target civilians, CNN reported.
Most recently, a Saudi strike last week killed 27 civilians, mostly children, fleeing the violence in the besieged southern city of Hodeidah.
The US and the UK have provided military and intelligence support to the Saudi-led coalition which was formed in March 2015 to restore the government of president Abd Rabbuh Mansour Hadi who was ousted by Iranian-backed Houthi rebels that year.
The UN report, however, has not investigated the US and UK role in what it described as potential war crimes committed in Yemen.
The UN panel did not immediately respond to a Middle East Eye request for comment.
At a press conference on Tuesday, US Secretary of State James Mattis told reporters that the US “has not seen any callous disregard” by the Saudi-led coalition, and thus “will continue to work with them to reduce this tragedy,” in reference to the killing of non-combatants in the war using US-supplied weapons.
He also said the US support for the coalition is “not unconditional”. It is conditioned on the coalition “doing everything humanely possible to avoid any possible loss of life” and supporting the UN-brokered peace process.