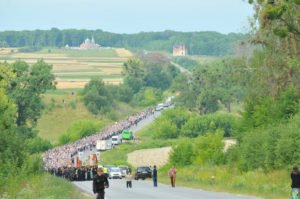 July 2016 procession for peace in Ukraine

A paramilitary force of the right-wing Organisation of Ukrainian Nationalists, headed by Nikolai Kokhanivskiy, has put up a picket on Zhytomyr highway near Kyiv to block the mass religious procession for peace which began several weeks ago from entering Kyiv. They are prepared to stop the “‘Moscow popy” (pejorative term for Orthodox Church priests). A report in Ukrinform is here.

“They must understand that Kyiv is Ukraine, so they have to turn around and march to Donetsk and Moscow, not Kyiv”, said Kokhanivsky.

When asked what his force will do with women and children marching in the procession, he answered that they will deal only with the “popy”.

The title of the news article in Ukrinform, the Ukrainian state news agency, calls the Orthodox Church procession a “Moscow procession” while OUN men in military uniforms are called “activists”. The procession has been harassed and threatened by right-wing nationalists along its two routes, which began in western Ukraine and in eastern Ukraine in early July.

The procession is ignoring the authorities’ ban from entering Kyiv and continues marching. Pilgrims are also refusing to board buses offered by authorities, reports Ukrinform.

A July 26 news report is published in French on the procession; it is here.