With Statement Equal Parts ‘Dangerous’ and ‘Imbecilic,’ Trump Smears Khashoggi and Vows to Back Murderous Saudis

President Donald Trump speaks to members of the media prior to his departure from the White House November 20, 2018 in Washington, D.C. (Photo: Alex Wong/Getty Images)
In a bizarre, exclamation point-riddled statement on Tuesday that one critic said reads more “like a 6th grader’s school report” than an official White House press release, President Donald Trump shrugged at the CIA’s conclusion that Saudi Crown Prince Mohammed bin Salman (MBS) ordered the murder of journalist Jamal Khashoggi—”maybe he did and maybe he didn’t!”—and declared that the U.S. will continue to back Saudi Arabia because it is one of the world’s largest oil producers, a major purchaser of American arms, and an ally in the “fight against Iran.”

“This is, without a doubt, the most uninformed, imbecilic, toady, poorly-written, categorically untrue statement I have ever seen from a president of the United States.”
—Joe Cirincione, Ploughshares Fund

Speaking to reporters on the White House lawn just hours after his statement went public, Trump said Khashoggi’s murder “is a very complex situation, it’s a shame, but it is what it is.”
“It’s all about America first. We’re not going to give up hundreds of billions of dollars in [weapons] orders and let Russia, China, and everybody else have them,” the president added. “Saudi Arabia, if we broke with them, I think your oil prices would go through the roof. I’ve kept them down, they’ve helped me keep them down.”
Watch:

"For me, very simple, America first. Saudi, if we broke w/them, your oil prices would go through the roof" pic.twitter.com/568fbMbnco

“The world is a very dangerous place!” reads the very first line of Trump’s written statement, which proceeds to falsely accuse Iran of fueling the humanitarian crisis in Yemen—a product of years of relentless bombing by the U.S.-backed Saudi coalition.
Javad Zarif, Iran’s foreign minister, denounced Trump’s attempt to blame Iran for Saudi atrocities as “shameful” and joked, “Perhaps we’re also responsible for the California fires, because we didn’t help rake the forests—just like the Finns do?”

Mr. Trump bizarrely devotes the FIRST paragraph of his shameful statement on Saudi atrocities to accuse IRAN of every sort of malfeasance he can think of. Perhaps we’re also responsible for the California fires, because we didn’t help rake the forests— just like the Finns do?

6:41 PM – Nov 20, 2018
Despite reports that the CIA has “high confidence” in its conclusion that MBS ordered Khashoggi’s killing, Trump said in his statement on Tuesday that intelligence agencies are still assessing evidence and proclaimed, “It could very well be that the Crown Prince had knowledge of this tragic event—maybe he did and maybe he didn’t!”
“That being said,” the president continued, “we may never know all of the facts surrounding the murder of Mr. Jamal Khashoggi. In any case, our relationship is with the kingdom of Saudi Arabia.”

“Today’s delusional White House statement makes clear the Trump will do just about anything to protect his business interests and his dangerous march to war with Iran.”
—Kate Kizer, Win Without War

Trump goes on to smear Khashoggi by parroting Saudi Arabia’s talking point that the Washington Post columnist and U.S. resident was an “enemy of the state” and “a member of the Muslim Brotherhood.”
Foreign policy experts and peace activists were aghast at Trump’s fact-free and downright strange statement, which comes on the same day the CIA is expected to present its full findings on Khashoggi’s murder to the president.
“This is, without a doubt, the most uninformed, imbecilic, toady, poorly-written, categorically untrue statement I have ever seen from a president of the United States,” Ploughshares Fund president Joe Cirincione wrote on Twitter. “A complete disgrace.”

Re-upping. Today’s delusional White House statement makes clear the Trump will do just about anything – including a blank check of support for a foreign government to murder U.S. residents and starve millions – to protect his biz interests & his dangerous march to war with Iran.

My latest in @thehill: MbS’ most recent blatant human rights violation, the apparent murder of Jamal #Khashoggi, is on Trump. #JusticeForJamal #YemenCantWait https://thehill.com/opinion/international/411502-trump-has-emboldened-mbs-to-act-with-impunity#.W8UBhSrxw8Y.twitter …

6:51 PM – Nov 20, 2018 · Washington, DC
Jon Rainwater, executive director of Peace Action, said the president is “making himself into a sort of ‘accessory after the fact’ to Mr. Khashoggi’s grizzly murder” by working hard to “whitewash the Saudi Royals’ crimes.”
“The U.S. is a party to the bloodshed in Yemen, and this statement tells us that President Trump intends to keep it that way,” Rainwater added. “Presidential tantrums notwithstanding, members of Congress need to dust off their moral compasses and finally vote to extricate the U.S. from this man-made catastrophe in Yemen.”
During a press conference after Trump’s statement went public on Tuesday, Secretary of State Mike Pompeo stood firmly behind the president’s remarks and expressed confidence that billions of dollars in weapons deals with the Saudis “will be completed in a timely fashion.” 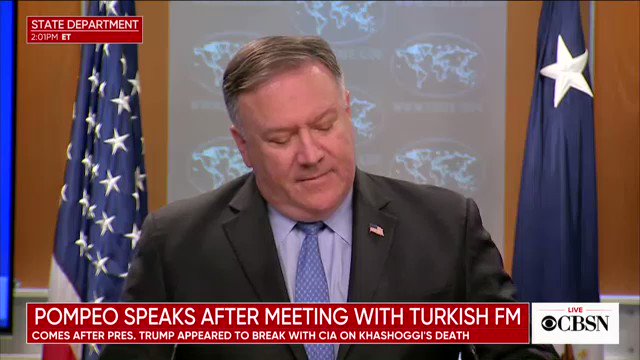 “We are hopeful that each of those commitments that the kingdom of Saudi Arabia made to the United States to purchase equipment will be completed in a timely fashion,” said Pompeo on Saudi Arabia completing $110 billion arms agreement. https://cbsn.ws/2A8pQtT

William Hartung, director of the Arms and Security Project at the Center for International Policy, argued in a new report (pdf) that Trump is vastly inflating the economic impact of U.S. arms deals with Saudi Arabia in order to justify maintaining his cozy relationship with the kingdom.
“The president’s assertion that it is possible to balance benefits to the U.S. economy against the heinous behavior of an ally doesn’t hold up to scrutiny,” Hartung wrote. “No economic benefit, no matter how large, can justify continuing to arm a regime that has not only killed a journalist in the most brutal way imaginable but has killed thousands of civilians in indiscriminate bombing attacks in Yemen, many of them with U.S.-supplied bombs and aircraft. But if economic arguments are to be brought into play, they should at least be accurate. This has not been the case.”