Noura Selmi recounts the nightmares that have plagued her since the fighting ended in Gaza. “The ceasefire was declared and life is trying to be normal again,” Selmi writes. “Unfortunately, the rockets are still following me in my sleep.” 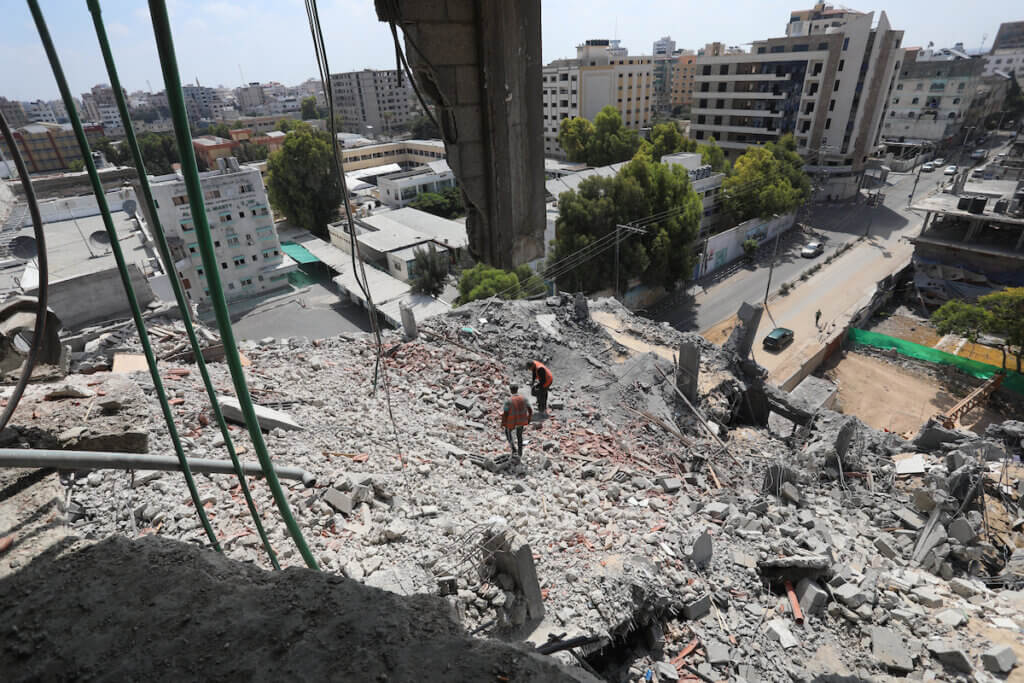 Editor’s Note: The article is part of our series Gaza Diaries which shares firsthand accounts of Palestinians who lived through the 11-day Israeli attack on Gaza in May 2021, and are now dealing with its aftermath. You can read the entire series here.

During the last war on Gaza, I was forced to consider that my house could be destroyed by a missile while we were still inside it. And I could be buried under its rubble. I might live. I might die. I might live while losing part of my body. I might lose one of my family members, or all of them. I might live but be in a coma. Perhaps my family would lose me. Perhaps we would lose each other. Many “mights” and “perhaps” dominated my thoughts during that time.

Every morning I would wake up and watch videos made by Palestinians and doctors explaining how to survive if you are caught under the rubble, and were lucky enough to be alive. When the heavy airstrikes were near my house, each one of us in my family prepared a small bag in case we had to escape the house to save ourselves. In a moment of silence, a moment of grief, I felt sad for the fact that we are giving up our memories unwillingly. A small bag full of official documents and papers doesn’t define us. Do we really have to take this tiny bag and leave the house itself behind us? What about my stuff and my library? What about my father’s garden? The lemon, apple and olive trees behind my window?

I wish Gazans could uproot our houses and move them away from this monstrous bombardment. Or at least have got the ability to hide our loved ones in secret places until the escalation ends.

The 11-day war took me back to 2014 when the war lasted for 51 fatal days. Then my family and I had to leave our house because of the airstrikes. If I had known that it would be my last time to see that house, I would have said goodbye. But the house, including all our dear memories, was vanished by an F-16 missile like it never existed. That horror still haunts us until this moment. The war hasn’t stopped since then.

I thought that everything would be over once the ceasefire came into effect, but as usual, I was mistaken. The city has been distorted. 243 people including more than 100 women and children were killed. Several families were wiped from the civilian record alongside damaged and ruined buildings. And I am supposed to deal with all of this?

During the war, this belief crossed my mind and settled — that maybe if I died now, Allah would be merciful to me even if I wasn’t ready to meet him. At least I would not live in fear and terror expecting a missile over my head at any moment.

The ceasefire was declared and life is trying to be normal again. Unfortunately, the rockets are still following me in my sleep. Since the ceasefire, and until this moment, I am still having nightmares about the endless war. Every time I go to bed, I see the death of a loved one, the destruction of a dear place, and me running alone trying to rescue myself from missiles. Every time I wake up sweating, panicked and thanking Allah that it is just a nightmare. And I am sure it is the same for everyone living in Gaza right now.

Two days ago, I had this horrible and awful nightmare. I was screaming for help, and the missiles didn’t stop. There was a man trying to protect his family; I was crying and I told him to run but he looked at me and said, “This is my house, if it is meant for me to die, I will die inside it.” It is weird how nightmares connect me with people I have never met before, but we all share the same pain.

Today, the horrible nightmare went like this: I was at my university, the dearest place to my heart, and it was as black as coal and the buildings were all struck to the ground. Apparently, sleeping isn’t my comfort anymore.

Every nightmare shows me a more awful reality worse than the previous one. Sleeping, which was my peace and quiet after many horrible mornings, is now what I am trying to avoid. I don’t think I will ever heal from war, nor will nightmares stop haunting me.