Neta Golan recounts the day in 2002 when Colin Powell visited a besieged Yasser Arafat in his presidential compound in Ramallah during the Second Intifada, as international solidarity activists tried to protect the Palestinian leader from Israeli attack. 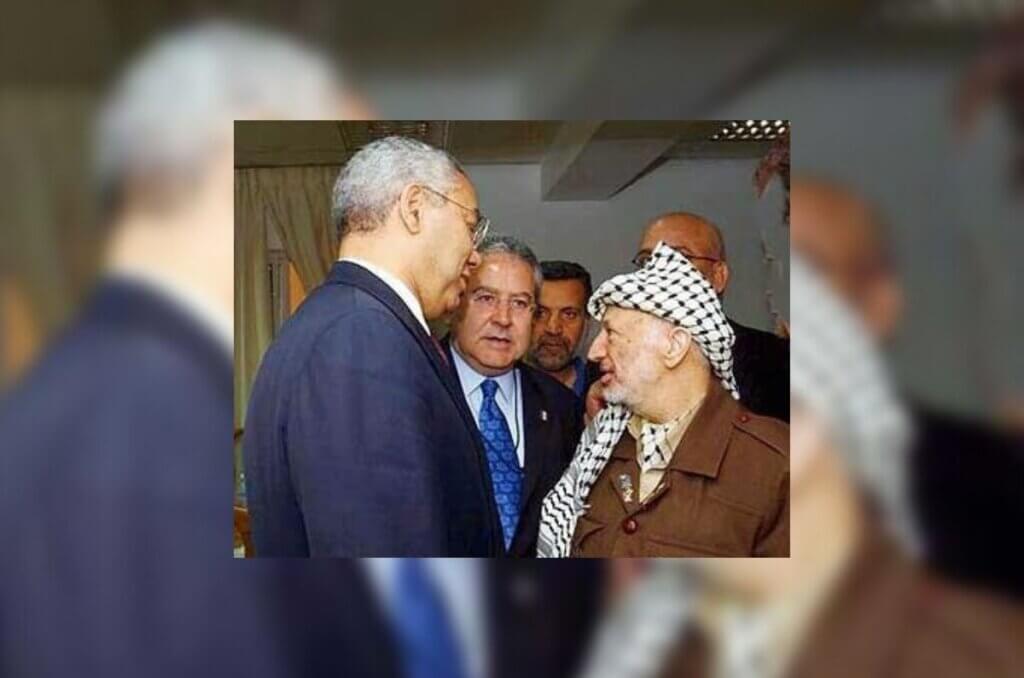 U.S. SECRETARY OF STATE COLIN POWELL MET WITH PALESTINIAN LEADER YASSER ARAFAT INSIDE ARAFAT’S BESIEGED HEADQUARTERS IN THE WEST BANK TOWN OF RAMALLAH ON APRIL 17, 2002. IN A TWO-HOUR MEETING WITH POWELL, ARAFAT DEMANDED THAT THE INTERNATIONAL COMMUNITY AND THE BUSH ADMINISTRATION WORK TO BREAK HIS ISOLATION BY THE ISRAELIS. (PHOTO: AP/ PALESTINIAN AUTHORITY)

Editor’s Note: Neta Golan originally shared a version of this article as a post on Facebook and then expanded it here.

Friends have posted about the fact that Picasso’s Guernica painting was covered up when Colin Powell lied to the United Nations about Iraq having weapons of mass destruction. This brought up memories of being in the besieged presidential compound in Ramallah during Colin Powell’s visit in April 2002.

In late March 2002 during the second intifada, the Israeli occupation forces launched a military operation in which they reoccupied the enclaves of the West Bank controlled by the Palestinian Authority. During this military invasion, the Mukata’a, Yasser Arafat’s presidential compound in Ramallah, and the Church of Nativity in Bethlehem where civilians and freedom fighters had taken refugee, were both attacked and besieged by Israeli forces. I was a part of a group of solidarity volunteers, from the International Solidarity Movement (ISM), which used our privilege as internationals to offer support to the Palestinian popular struggle. Together with other international volunteers we managed to break the siege and enter the presidential compound, while another group of ISM volunteers broke the siege of the Church of the Nativity to offer protection to those taking refuge there.

Israeli soldiers killed three Palestinians in the compound in the first days of the siege and one, Khaled Jarrar, was only evacuated to hospital when ISM activists, Adam Shapiro and Caoimhe Butterly managed to convince an ambulance driver that they accompanied, to respond to Khaled calls for help as he lay bleeding to death. The ambulance driver and the doctor and nurse, were all arrested by the Israeli soldiers. And so was Khaled, but Caoimhe told the soldiers “I can see that you are taking him alive!” Thankfully Khaled survived, he went on to become an acclaimed artist.

Adam and Caoimhe stayed in the compound that day. The presence of one or two internationals didn’t seem to change the Israeli lethal assault on the building. But after dozens of international solidarity activists came from a side street and marched past the Israeli tanks, under fire, into the besieged compound, the Israeli shooting at the building decreased significantly. Inside the compound the walls resembled swiss cheese, riddled with small bullet holes and larger missile holes.

When we learned that Colin Powell was coming to the compound to try to negotiate a solution, we prepared to meet, if not him, then at least the journalists that were accompanying him. We put up a sign that read “Occupation is Terror” on the wall outside the entrance of the building.

American intelligence agents that came to arrange for Powell’s security told our Palestinian hosts that if we didn’t take our sign down, and if the international solidarity activists weren’t kept out of sight, Powell wouldn’t come.

I asked one of the agents why we needed to remove our sign. He said that it was, “a provocation to the Israelis.”

Just before Powell arrived, under the American agent’s gaze, the occupation forces cleared the parking lot in front of the besieged building by crushing the parked cars into little squares and making a wall out of them. The owners were forced to look on from inside the building. Obviously provocations against Palestinians didn’t matter to the Americans.

And yet our besieged Palestinian hosts had hoped that Powell’s visit might help address the massacres and atrocities that Israel was committing across the occupied territories and its re-occupation of Area A in the West Bank. So, we took down our signs and stayed out of sight in a room by the entrance during the visit.

The Israeli occupation forces temporarily stopped scrambling the airwaves so that we could make and receive phone calls during Powell’s visit. More importantly, a day before Powell’s visit they also reconnected the water lines so that we could all wash ourselves because for someone coming from the outside our collective unwashed smell carried a punch. Gratefully since we all stank we didn’t smell each other or ourselves. The water lines were cut again after the visit.

When Powell arrived, we international solidarity activists sang “We shall Overcome” from our room behind the door so that Powell and the delegation of White House approved journalists could hear us. We added verses to the song with “Refugees will return,” “Prisoners Will be free,” and “We shall have one state…”

Our song reached Powell’s ears but not his heart. Unfortunately, our showers and the fact that we kept singing pretty much non stop until the siege was lifted were the only benefits of Powell’s visit. We discovered that singing did wonders for our nerves that were shot by hunger, thirst, and the threat of the occupation forces invading the building.

After the first meeting between Powell and Arafat our Palestinian hosts were pleased. Powell had listened to President Arafat. But when Powell returned again after meeting with Ariel Sharon, who took Powell on a helicopter ride over the Lebanese border, he simply parroted all the Israeli positions. Some negotiator.

Arafat was livid. The activists were told we didn’t need to keep ourselves hidden anymore, much to the distress of the American secret service agents. I was about to leave our room with a sign through a low window that led to the cleared parking lot where some press were gathered when an American agent with weapons strapped to his arms and legs ordered me not to. I asked, “why not?” “Because I cannot guarantee your safety,” he answered. I had to laugh. I jumped out the window. My sign read “Deir Yasin-1948 —- Jenin-2002.”Support Mondoweiss