Home » Post Page » Targeting the children of the village of Esawyeh by arresting and requesting them for interrogation….prison sentences 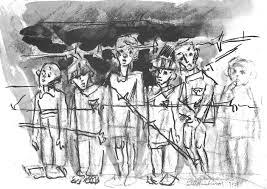 The District judges sentenced two Jerusalemite men while the Nazi occupation forces and Gestapo intelligence personnel targeted the children of the village of Esawyeh by arresting them and requesting them for interrogation.

Lawyer Mohammad Mahmoud explained that Nazi judge sentenced Mouath Abed Rabbo for 4 and a half years of actual imprisonment and a suspended probation of 12 months for 3 on charges of planning to carry out a “military attack”.

Amjad Abu Asab, head of Jerusalemites detainees and prisoners families committee, explained that the District judge recently sentenced Mohammad Daoud Alayan (22) from the village of Esawyeh for six and a half years of actual imprisonment and a 3-thousand NIS fine after convicting him of “membership in a military cell, possession of a weapon and planning to carry out an attack”.

Arrests and extensions of arrests

The occupation forces arrested on Thursday night two children from the village of Esawyeh. They are: Mohammad Naser Salahat (13) and Mohammad Ali Dari (13).

The judge extended the arrest of Younes Abu Hummos (15) and Mahmoud Mustafa (13) until 19/2/2017, Khalil Naser until 20/2/2017; they are from the village of Esawyeh and were arrested after raiding their homes in the early morning.

The judge also extended the arrest of Mohammad Shalabi until 25/5/2017 and transferred the child Mouayad Abu Mayaleh to a court commission that consists of three judges.