Home » Post Page » Targeted killing could become a game for all 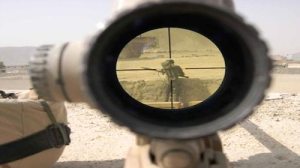 …if we fail to nail the warmongers

By Stuart Littlewood
Secret mafia-like cabals are systematically wrecking our planet to feed their greed. They do so with impunity and without regard to human misery. An enormous backlog of war criminals still strut the international stage while we seethe with impotent rage.
Pushed into a corner like this, and denied normal ways and means of eradicating the evil that stalks our precious world, we begin to fantasize, to think the unthinkable, as I did six years ago when I wrote a tongue-in-cheek piece about the rising popularity of assassination as practised by the “great and good”.
The article harked back to the 1969 film The Assassination Bureau, based on Jack London’s unfinished novel. The setting of this romp is the turn of the century, a hundred years ago, a time for regime change and the purging of corrupt monarchs and cruel tyrants. The Bureau’s hit team is for hire, provided that founder and mastermind Ivan Dragomiloff deems the targeted killings “socially justifiable” and there’s proof of the candidates’ misdeeds.
Eventually, however, the moral rectitude of the enterprise is overtaken by financial greed, and the day comes when the Bureau accepts a mission to eradicate an unnamed but prominent public figure. The huge fee is paid in advance, proof supplied, job accepted – then the target is revealed. It is Dragomiloff himself. Dragomiloff, far from alarmed, is actually flattered by the challenge of pitting himself against the very killing machine he has perfected and the prospect of purging the more corrupt elements within it.
When London died in 1916 the book was left unfinished. He’d said he couldn’t think of a logical ending.
Assassination, as we all know, is the targeted killing of persons, usually for political or ideological (and often insane) motives. This is OK, but not OK.
In 1976, US President Gerald Ford issued an Executive Order after revelations that the CIA had made several attempts on the life of Cuba’s Fidel Castro. Henceforward targeted political killings were outlawed: “No employee of the United States government shall engage in, or conspire to engage in, political assassination.” Every US president since then has upheld Ford’s prohibition – or got round it somehow.
Presidents Jimmy Carter and Ronald Reagan reaffirmed the ban, although it didn’t stop the US bombing Muammar Gaddafi’s home in 1986 in the hope of rubbing him out, or the Clinton administration firing cruise missiles at suspected guerrilla camps in Afghanistan in 1998, or George W. Bush instructing the CIA to engage in “lethal covert operations” (based on an intelligence “finding”) to destroy Bin Laden and his Al-Qaeda organization.

White House and CIA lawyers were at pains to explain that intelligence “findings” make all the difference because the ban on political assassinations doesn’t apply in wartime. The right sort of “finding” can put everything on a war footing. They also said that the prohibition wouldn’t prevent the US taking action against terrorists. And in the wake of 9-11 it wouldn’t stop the United States acting in self-defence.

So, all the US has to do is invent or manufacture a “finding”, brand the folk who stand in their way “terrorists” and claim their extermination is actually an act of self-defence in a war situation.
Furthermore, reports suggested the Bush administration got together with Israel to establish the legal framework for a new American targeted-assassination policy. The Israelis, of course, are world experts. Annoying pockets of resistance to their land-grabs, ethnic cleansing, abductions, illegal settlements and other war crimes in the Palestinian West Bank and Gaza Strip are dealt with by wholesale imposition of specially concocted warfare laws for the benefit of Israel’s “self-defence”. Never mind that they trample on everyone else’s rights. This suited Bush admirably as he pressed ahead with his war-without-end on terror.
Israel’s liking for assassination goes back to pre-state days when it was practised on a regular basis against Arab and British targets by the Irgun, a thoroughly unpleasant organization that believed political violence and terrorism were legitimate tools for removing obstacles to the Zionist cause and for driving the Arabs from their homeland. Assassination became official Israeli policy in 1999 when its military planned “initiated attacks” to stop Yasser Arafat’s militia, the Tanzim, from firing on illegal Israeli squatters in the West Bank and Gaza.
The Israelis demonstrated great ingenuity in bumping off bomb maker Yahya Ayyash. In 1996 this master-technician in the business of suicide bombing had been on Israel’s most-wanted list for three years. The Shabak (Israel’s secret service) finally tricked a friend into giving Ayyash a booby-trapped mobile phone. When Ayyash made a call, the Shabak detonated it.
In 2008 the Israelis excelled themselves again by terminating Hezbollah’s Imad Mughniyeh, “the Fox”, with an exploding headrest in his Mitsubishi. Remember, Hezbollah became a force to be reckoned with in response to Israel’s 1978 and 1982 invasions of Lebanon and wholesale slaughter of Shi’is living in south Lebanon.
Israel’s preferred method of assassination, however, is the air strike, and increasingly the drone strike, which is lazy, lacking in finesse and often messy. In 2002 Israeli F-16 warplanes bombed the house of Salah Shehadeh, the military commander of Hamas, in Gaza City, killing not just him but at least 11 other Palestinians, including seven children, and wounding 120 others.
In 2004, at the second attempt, Hamas’s spiritual leader, Ahmed Yassin, wheelchair-bound since the age of 12, and nine innocent bystanders were obliterated in a helicopter gunship attack. Yassin had survived an F-16 bomb blast the previous year. Israel’s then prime minister, Ariel Sharon, characterized Yassin as “the mastermind of Palestinian terror” and a “mass murderer”, which was rich coming from a war criminal who ran Israel’s death squad, Unit 101, and was found indirectly responsible for the massacres in Lebanon’s Sabra and Chatila refugee camps.
When Arafat claimed the Israeli cabinet had approved a plan to kill a large number of leading Palestinians, Sharon denied it but defended assassinations as a “defensive counterterrorism measure”. He said he had sent the Palestinians a list of 100 terrorists the Palestinian Authority must arrest, otherwise Israel would “exercise our right of self-defence”.
Oh, and snipers, another Israeli favourite.
According to the Israeli human rights organization B’Tselem, 270 Palestinians have been assassinated by Israel since the second Intifada in 2000. “The use of state assassinations by Israel against Palestinian suspects is undermining the rule of law and fuelling the cycle of violence in the region,” warned Amnesty International.
But systematic extra-judicial extermination is regarded as “legal and legitimate” by Israel’s attorney-general. “If anyone has committed or is planning to carry out terrorist attacks, he has to be hit. It is effective, precise and just,” said Israeli minister Ephraim Sneh in 2001, oblivious to the frequent lack of precision, the collateral casualties and the possibility that his information is wrong.
The US State Department describes its own hits on Al-Qaeda as “legal and necessary”. But pre-emptive strikes are not America’s only tool. There’s the detention facility at Guantanamo Bay, the product of a truly sick mind where hundreds of prisoners of “war”, from 13 years old upwards, have been held long-term under inhuman conditions, without “due process” and in flagrant breach of Geneva Conventions. Over 150 are still there. It’s a living death, a quite different form of assassination. All very reminiscent of Israel’s abduction, “administrative” detention and torture practices.

We’re told Israeli advisers were training US special forces in aggressive counter-insurgency methods in Iraq, including the use of assassination squads against guerrilla leaders. Urban warfare specialists shared the skills they had honed against Palestinians in the West Bank and Gaza in order to help the US set up its own hunter-killer teams.

Given the British government’s fawning subservience to Israel’s interests, and its willingness to shield Israeli war criminals from arrest, it is not difficult to imagine Mossad hoodlums prowling the streets of London, Bradford, Glasgow and Manchester snuffing out plotters against their rotten racist regime.

Even more worrying were reports in 2008 that Israeli death squads had been authorized to enter “friendly” countries and kill those suspected of being a threat to the Jewish state wherever they were hiding. Until then targeted killings had been pretty much restricted to occupied Palestine but the appointment of a new Mossad director, Meir Dagan, in 2002 changed that.
Sharon was said to have given his old buddy Dagan a mandate to revive the traditional methods of Mossad, including assassinations abroad, even at the risk to Israel’s bilateral relations. Given the British government’s fawning subservience to Israel’s interests, and its willingness to shield Israeli war criminals from arrest, it is not difficult to imagine Mossad hoodlums prowling the streets of London, Bradford, Glasgow and Manchester snuffing out plotters against their rotten racist regime.

A socially responsible “good riddance” service at our fingertips?

Warmongers are to be found in every nook and cranny of our Establishment, and there is no more serious act than taking one’s country into an unjust war. Here in the UK 412 MPs voted for the infamous war in Iraq. That’s about two-thirds of our elected representatives who lacked the common sense decency and diligence to check the truth of what Prime Minister Tony Blair was feeding them, especially when so many people outside Parliament knew it to be a pack of lies. They took us to war and killed hundreds of thousands purely to further the interests of US neocons and Israel, and to feed the vanity of Britain’s political élite.
Then, in August last year, 272 British MPs voted for military action against Syria after allowing their heads to be filled with nonsense by William Hague and David Cameron. Many were the same idiots who voted for the Iraq war 10 years earlier and still hadn’t learned their lesson. For such contemptible behaviour there should be dire consequences.
Fortunately, 285 MPs were sensible enough to stop them. A narrow squeak indeed.
Today our beautiful planet is infested by genocidal tyrants, corrupt leaders, bloodthirsty heads of state and power-crazed conglomerates, hankering for global domination, robbing us of our freedoms and wishing to keep the world in turmoil for their own grotesque purposes. How can ordinary people end the evil at the top when the wheels of justice are in the hands of the very people on our wanted lists?
We can only pray that some of the “wanted” will meet their end at the hands of their own hunter-killers, as almost happened to Dragomiloff. Alternatively, what if a real Dragomiloff appeared with a real assassination bureau – or several of them? Think of it: a socially-responsible international service activated by ordinary citizens or civil society groups to rid us of the world’s tormentors.
All riddance requests would have to be accompanied by “intelligence findings”, of course. Thus, the work of the assassination bureau would be perfectly “legal”, “legitimate” and “necessary”, in accordance with the standards set by Israel and America.
If Jack London had lived, and seen what we see today, I wonder if he would still be stuck for a good ending to his ripping yarn.