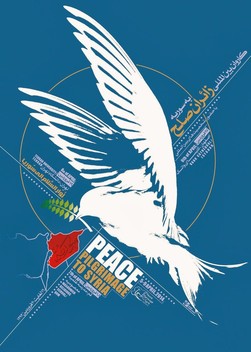 Ann Patterson and I were honoured to participate in the International Peace Pilgrimage to Syria via Iran, from 5th – 14thApril, 2014. During an international delegation to Syria last year, we had both promised to return to Syria, and we also fulfilled a long-held intention to visit Iran.
IRAN
We arrived in Iran on 5th April, and joined an international delegation of 14 from Lebanon, Australia, Canada, Pakistan, the UK and Germany.   We were invited by the Unified Union of Unified Ummah’s, who organized this peace and humanitarian mission via Iran.  Although Iranians are themselves suffering economic duress from some of the same nations oppressing Syria, they choose to show solidarity with Syria by sending large amounts of aid, purchased with the individual contributions of thousands of caring Iranian citizens.

We spent four wonderful days in Iran, where we visited Tehran, (for the main meetings and conference), Isfahan (a centre for Iranian and Armenian Christians), and Qom (a religious centre for Shia Muslims, where we met with Shia scholars). There was also a major event at Tehran University, where we spoke to students, and children sang and presented toys, including their own, for Syrian children.  We also met with the Speaker of the Iranian Parliament and other political representatives. 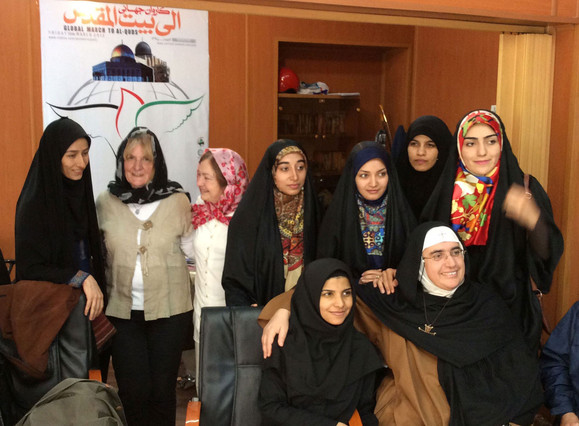 Ann Patterson, Mairead Maguire and Mother Agnes Mariam meeting with Iranian peace activists
I was deeply moved by the warmth and friendliness of the Iranian people, and was particularly impressed with the youth.  We asked some women students about their hope for the future of their country and they replied that they feared an attack by the US or NATO, but hoped otherwise.  We found this sad, as these young people are eager to travel and make friends in other countries, like most young people.

The cities we visited were modern, and the Islamic architecture magnificent, as was the Armenian church.  I would encourage people to visit Iran to meet its people and experience its beauty. Indeed I believe this is the only way to peace – people to people and country to country.    Foreign women are encouraged to wear the headscarf, out of respect for Iran’s tradition.

During our visit we also met with an Iranian friend, who shared her story of imprisonment and abuse, due to her human rights advocacy.  There is no doubt Iran needs to show greater respect for human rights, but many said that it is moving in the right direction.
It was a great inspiration to visit Iran, and I look forward to visiting again in the future.  I would like to extend our deepest thanks for our Iranian friends for their wonderful hospitality during our visit to their country.

FROM IRAN TO SYRIA

On 10th April, forty people, including 24 of the most highly respected and well-known cultural and religious Iranian leaders, together with 16 internationals, flew from Tehran to Damascus.  We brought medical aid (co-ordinated by Iranian Red Crescent) and also toys and other gifts, all collected with donations from people of Iran and the international visitors.
We were welcomed in Damascus by Dr. Ahmed Khaddour, Mother Agnes Mariam, the Mussalaha organization, Dr. Declan Hayes, and Mohamed Quraish. I would take this opportunity to thank them for their central role in conceiving this project and bringing it to fruition.  Other pilgrims joined us from Lebanon, the US, Canada, and other locations.
During the next four days our delegation visited the Great Mosque, Chapel of St. Paul, the Sayyidah Zaynab Mosque, (in the words of the Iranian Imam, ‘a dream come true for Iranian pilgrims’).  It was a great privilege to join and pray with our Muslim and Christian friends.

Mairead Maguire and other members of the delegation in Homs with Mother Agnes Mariam and Fr. Michael Noman of the Mussalaha Reconciliation Initiative. In Homs the delegation heard more about the unspeakable crimes committed by rebels.
Our delegation also travelled to Latakia and Homs. We saw the damage and spoke to Syrians who were unable to live in their homes and have suffered unspeakable crimes committed by rebels against them. Outside our hotel in Damascus we heard two large explosions that killed a soldier and three civilians in two cars.  They were the result of random mortar attacks that plague a city otherwise apparently under control of government forces. Even the wife of the ex-president was killed in her home by such an attack whilst she was cooking breakfast.

In Latakia, Governor Abdel-Qader told us that the Syrian people are facing with steadfastness an international plot against their country.  He pointed to thousands of Jabhat al-Nusrah fighters that swarmed across the Turkish border on March 21, 2014, with Turkish military support to attack Christian Armenian Syrians north of Latakia. Eyewitnesses reported that 50-90 residents were massacred, others taken into Turkey against their will, and a large number sent in flight to Latakia. We visited some of these refugees, who were staying in an Armenian Church. 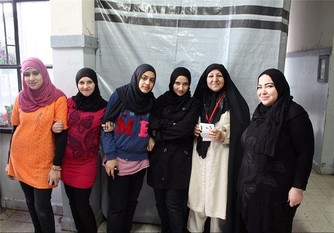 Mairead Maguire and other members of the delegation in Homs with Mother Agnes Mariam and Fr. Michael Noman of the Mussalaha Reconciliation Initiative. In Homs the delegation heard more about the unspeakable crimes committed by rebels.

We also visited refugees from Haram, near Idlib, Syria.  They told us how over a year ago hundreds of foreign fighters had crossed from the nearby Turkish border, kidnapped over 300 people and brutally killed another 150.  Many had fled and were afraid to return to their area, seeking instead to live in as refugees in Latakia. They also reported that Jabhat al-Nusrah fighters received support from the Turkish military, and launched cross border artillery, tank fire and missile attacks against not only Syrian Army positions but at the civilian population of Latakia. (Some Syrians told us that Turkey has evolved into a major military operational base for a NATO backed invasion of Syria.)
In Latakia we met with Lilly Martin, an American immigrant to Syria who has lived there permanently for 24 years.  She told us that missiles are fired daily into Latakia from Turkish territory, upon the civilian community, and often killing many people on the streets of the city.  She said that Syria was “neither in civil nor sectarian war” and that the crisis that began in March, 2011 in Deraa, Syria, was not a popular uprising, or a revolution but rather a foreign funded and foreign planned attack on the Syrian government and its civilian population, for the express purpose of regime change.  When asked, “What do you see as the solution for Syria, and whom do you want to hear this message?” Martin replied, “The solution to the crisis in Syria will come when the United States of America will make a public political decision to stop aiding and supporting terrorism, and specifically the Al Qaeda terrorists and their affiliates who are killing Syrians daily.  I want President Obama to hear my message and the message of the Peace Pilgrimage to Syria, April 2014.”

In Homs, where the Musalaha movement began with Mother Agnes Mariam as one of its leaders, and where its members continue to work for peace and reconciliation, we met a group of ex-fighters who have accepted the Syrian government offer of amnesty (the 5th such) and stopped fighting. Some are now working with the Musalaha movement for a peaceful solution in Syria.   (Before leaving Damascus we learned over 100 rebels had agreed to give up their guns and that this is happening throughout Syria.)
We also met with six registered opposition parties.  They said that internal problems, such as marginalization of a big part of the Syrian society, was part of the conflict, but that Syrians could deal with these problems, without foreign intervention and internationalization of the crisis in order to implement foreign agendas.
During a reception, the religious leaders, including Grand Mufti Dr. Ahmad Badr al-Din Hassoun and His Beautitude, Patriarch Gregorios Laham, shared their message that Syria is united in its diversity, and their belief that Syrian people will be able to reach an understanding amongst themselves and resolve their differences in a national dialogue and without the use of guns.  They believe in a Syria that is created by Syrians and not by outside forces.  Like most Syrians, they are sure that if other countries will stop the flow of arms, fighters and other interference in Syria, the Syrian people will be able to reach an understanding amongst themselves and rebuild Syria together.  We were also informed that they all support the planned elections in spite of the fighting. 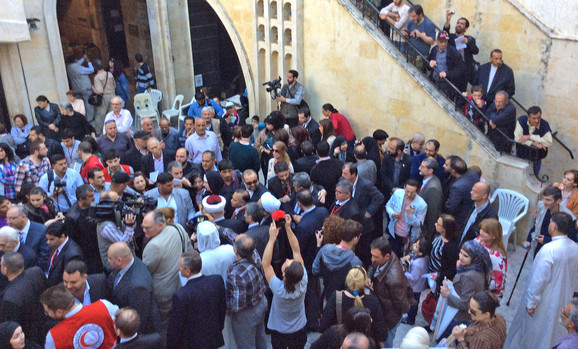 Meeting with the Kessab refugees at the Armenian Church Lettakia city.
Our delegation left Syria inspired by and hopeful for the Syrian people, for peace in their country, and we ask our countries and indeed all countries, to respect the integrity and sovereignty of Syria.
To all those who have lost loved ones, we extend our deepest sympathy.  We thank our hosts and the Syrian people for their kindness and hospitality and assure them of our solidarity as they rebuild their country, which has suffered so very much.
Mairead Maguire
Nobel Peace Laureate
Member of International Peace Delegation to
Iran and Syria
April, 2014.