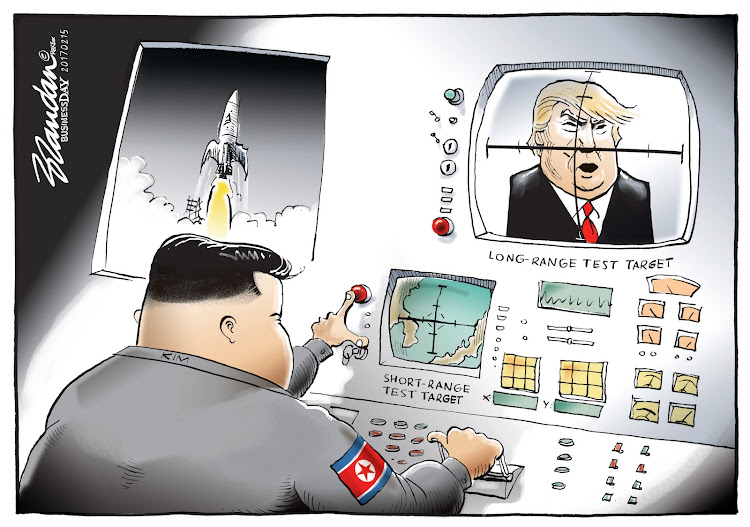 South Korea has dismissed a new report by a United States-based think tank that accused North Korea of being engaged in “deception” based on purported commercial satellite images that it said showed a number of “undeclared missile operating bases” inside the country.
The Washington-based Center for Strategic and International Studies (CSIS) claimed in a report on Monday that it had identified at least 13 of an estimated 20 undeclared missile operating bases according to new commercial satellite images.
“These missile operating bases, which can be used for all classes of ballistic missile from short-range ballistic missile (SRBM) up to and including intercontinental ballistic missile (ICBM), would presumably have to be subject to declaration, verification, and dismantlement in any final and fully verifiable denuclearization deal,” the report said.
The images focused on the purported Sakkanmol missile base, which “currently houses a unit equipped with short-range ballistic missiles but could easily accommodate more capable medium-range ballistic warheads,” the CSIS asserted.
On Tuesday, however, South Korea’s presidential office dismissed the CSIS’s account.
A spokesman for the South’s presidential office, Kim Eui-kyeom, said the CSIS report had gone too far to accuse Pyongyang of “great deception,” since the North has not made a specific agreement to dismantle or disclose the facilities mentioned in the report.
The South Korean official also rejected the analysis of the Sakkanmol missile site, saying, “The intelligence authorities of South Korea and the US have far more detailed information from military satellites and are closely monitoring” the facility.
He said Pyongyang had not made any promise to shut down that base.
The spokesmen also explained that the existence of such a missile site was an indication of the need for talks with North Korea to halt its nuclear activities.
North Korea has been involved in rigorous diplomacy with the South. US President Donald Trump — who met with North Korean leader Kim Jong-un in July — has also claimed that his country’s diplomacy with Pyongyang has eliminated a purported threat posed by North Korea to the US’s national security.
Some entities in the US, however, claim that Trump’s assertion is not supported by facts.
One of the authors of the CSIS report, Lisa Collins, said, “It has been pretty clear that the North has not been willing to give up its entire nuclear program.”
“The dispersed deployment of these bases and distinctive tactics employed by ballistic missile units are combined with decades of extensive camouflage, concealment and deception practices to maximize the survival of its missile units from pre-emptive strikes and during wartime operations,” the report said.
Follow-up diplomacy between the US and North Korea have borne little fruit. But South Korea has significantly advanced in its diplomatic engagement of its long-time rival, the North.
In their June summit in Singapore, Trump and Kim agreed to work toward denuclearization. But that agreement, made in a written document, was broadly-worded.
Still, the North has taken several steps toward that goal: it has suspended missile and nuclear testing, demolished at least one nuclear test site, and agreed to allow international inspectors into a missile engine test facility and another nuclear testing site.
In return, Pyongyang is seeking relief from harsh international sanctions — mostly spearheaded by the US — imposed on the country over its nuclear and missile programs. The US, however, has not offered any such relief, hence the slowdown in further diplomacy.
Last week, Pyongyang called off a meeting between North Korean Foreign Minister Ri Yong-ho and US Secretary of State Mike Pompeo in New York after the US resumed joint military drills with South Korea.

Canada seems to prefer state of ‘war’ in Korea, not peace In “Aletho News”

Does US Withdrawal from another Nuclear Treaty Really Benefit Russia? In “Deception”