Home » Post Page » Slaughter is not self-defense: The assault on Gaza and the corruption of language 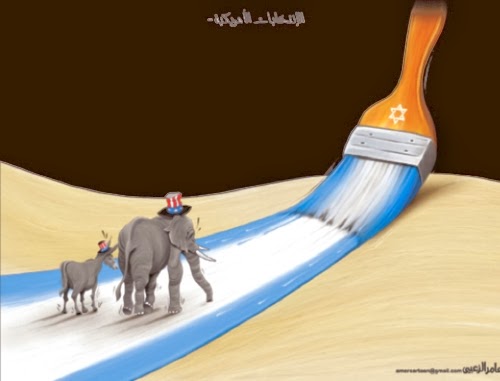 We are witnessing the unspeakable, again. Are there any words left adequate to the abomination of Israel’s ongoing onslaught on Gaza, an assault that is proceeding with dismal predictability, and that is, in fact, a repetition and an escalation rather than a recommencement of violence? It is 2009 all over again; it is 2012 all over again. 1400 Palestinians were killed in Operation Cast Lead, fitting prelude to Barack Obama’s inauguration; 161 were killed in 2012, a minor tribute to his re-election. Already, more than a thousand Palestinians have died in what is the most savage yet of these assaults, and President Obama continues to call it self-defense, though he dutifully regrets the loss of innocent civilian lives.

Let us not descend to this game of differentiating Palestinian civilians, or even Palestinian children, from Palestinian “combatants.” Israel targets Palestinians because Palestinians’ very existence is resistance, not because Hamas uses them as human shields. It is this diverse, differentiated, creative, vital, persistent existence of Palestinians that frustrates Israel, not the existence of Hamas or its rockets, which Israel has never really sought to eradicate, so handy an excuse are they for its periodic incursions and slaughters. And since it is the Palestinians’ right, as it is that of any occupied people, to resist, Israel’s resort is to deny them the right to exist.

So, for all the sanctimonious prattle emanating from Washington, Tel Aviv, Jerusalem or Fox News about protecting civilian lives, Israel’s aim once again seems to be to murder so many Palestinians that their individual identities dissolve into an undifferentiated statistical mass and they will become nameless. It is not enough that they be killed. Their very existence must be annulled, in keeping with the old Zionist lie about a land without people.

But for Israel to do so, Palestinians must be morally evicted beyond the line that separates human beings from things to be destroyed. So Israel’s mouthpieces and their global flock of media parrots chatter earnestly about how Arab culture does not value human life as Israelis do. Or, like US General James Conway, they bleat after Benjamin Netanyahu about the “deep and wide moral abyss” that separates Israel from its enemies; like Harvard Professor Ruth Wisse, they replay ad nauseam Golda Meir’s hypocritical jest about how peace would come “when the Arabs love their children more than they hate us”; or, like even Israeli columnist and liberal Zionist Ari Shavit, they wonder why Palestine has yet to produce a Nelson Mandela, conveniently forgetting that for decades Mandela too was jailed as a terrorist.

And this twisted, vicious moralizing is backed by the chorus of Israel’s allies, singing the song of self-defense, of protection of innocent Israeli civilians at the expense of Palestinian lives, of rallying round democracy in the fight against terrorism. Notably, of course, this slowly shrinking chorus is led by the United States and seconded by all the former colonial and settler colonial powers that Europe spawned. This defense of defense is hardly surprising, coming from that illustrious crew of terrorist states, with their long histories of genocide, enslavement, theft and exploitation.

If colonial expansion and military intervention against subjugated populations were not named defense, how could the United States continue to slaughter whole Pakistani or Yemeni families with drone attacks? How could it continue to torture and incarcerate people indefinitely with neither charge nor trial in its extra-territorial archipelago of prison camps? These too are done in the name of defense. Israel has had expert mentors in viciousness and happily deploys the weapons and methods its colonial allies so carefully honed in their own militarist adventures, interventions and counter-insurgency campaigns.

Meanwhile the massacre and traumatization and wounding of those little-valued Palestinian children continues, their flesh torn in too many cases by the thousands of dart-like flechettes that Israel’s bombs deliberately scatter in thickly populated neighborhoods, courtesy of the US defense industry. The tens of thousands of displaced but still trapped civilians have only collapsed ruins to return to.

Is there a language for this double horror, the overwhelming and disproportionate physical violence inflicted indiscriminately on a whole people and the spiritual violence of renaming this high-tech barbarity and its annihilating, racist aims as defense, protection, civilization, democracy?

Maybe only the language of Israel and its supporters is adequate to describe what is happening. It is the only language cynical and corrupt enough in its euphemistic abusiveness and in its twisted doublespeak to convey the moral abomination of this slaughter in the name of a civilization that defends itself by placing its victims beyond the pale of civility; that grounds its democracy in the racist exclusion of those they did not succeed in killing or displacing; that conducts its massacres in the name of humanity.

We do not even need, like Israel’s generals and politicians, to call this offensive another periodic “mowing of the lawn”, dub the Palestinians “cockroaches in a bottle”, or urge the rape or slaughter of Palestinian women whose wombs bear snakes. Where democracy and civilization are perverted into terms that draw the line between humans and brutes who may be exterminated with impunity; where defense becomes the name for indiscriminate slaughter and destruction; where care for civilians means the hounding of those who have nowhere to run, words best express in their very corruption the catastrophe that has once again been inflicted on Gaza.