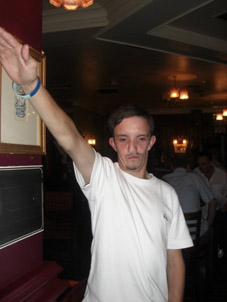 Mark Onion is the BNP candidate fighting the Orsett Ward in Thurrock’s council elections on May 6th. This picture is taken from his Facebook page and features the candidate seeming to offer a Nazi style salute. On his hand he appears to wear a Help for Heroes wristband.
On his Facebook page Onion has said that he finds films about the Holocaust and Slave Trade “amusing and funny”. He lists “Mein Kampf” and the “Final Solution” as his favourite books. He publicly jokes about violence and rape against women on his Facebook wall.
Nick Griffin MEP has protested time and again that BNP supporters are unfairly labelled as bigots. He says the BNP is no longer racist. He says he doesn’t support misogynistic sentiments. He claims the BNP is no longer anti-Semitic or sympathetic towards the Nazis.
And yet, time and again, BNP activists are exposed for holding intolerant and racist views. It would still be unfair to suggest everyone who supports the BNP is racist, but you don’t have to dig too deep before you discover an unhealthy amount of support for values that are inimical to the British way of doing things.
If mainstream candidates can be sacked for saying revolting things about the Queen or joking that they prefer bananas harvested by slaves, then it is perfectly reasonable to expect Griffin to fire a BNP candidate with explicit Nazi sympathies, who jokes about rape and violence against women and who finds films about crimes against humanity “funny and amusing”.
The neo-fascist BNP now hold 2 MEPs, nearly 1 million votes, 50 councillors and 1 Assembly Member in London. It is, therefore, the duty of voters to hold Griffin and the BNP to account.
When contacted by Nothing British Onions declined to comment or defend his actions. Unless a reasonable explanation can be found, this looks very bad for Griffin’s claims to have modernised the BNP and move them on from their Nazi past.
We therefore call on Nick Griffin to stop dithering on the entrenched racism within the BNP. If Mark Onion cannot account for this vile image, he should be sacked as his council candidate in Thurrock. 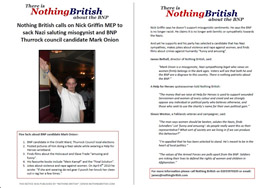 Please feel free to pass on this statement and our notice to your blogs and websites.
Best wishes,