“Little did Riyadh know that the most severe strategic blow to its regional influence would come not from Tehran, or Tehran’s agents in Baghdad – but Cairo, its closest Arab friend. The ousting of Zionist Mu-Barak did not only mean the loss of a strong ally, but the collapse of the old balance of power. The region could no longer be divided on a Riyadh-Cairo v Tehran-Damascus axis. Revolutions have struck in both camps: in “moderate” Egypt and Tunisia, as in “hardline” Damascus and Tripoli. The principal challenge for the Saudi Zionist puppet regime is no longer the influence of Syria, Iran or Hezbollah, but the contagion of revolutions.”

By propping up the Arab monarchies, Saudi Arabia is reverting to its old anti-revolutionary role 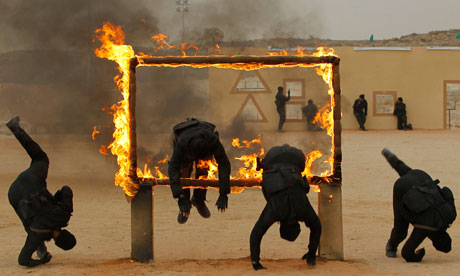 Saudi border guards demonstrate their skills during a graduation ceremony near Riyadh last month. Photograph: Fahad Shadeed/REUTERS
Little did Riyadh know that the most severe strategic blow to its regional influence would come not from Tehran, or Tehran’s agents in Baghdad – but Cairo, its closest Arab friend. The ousting of Mubarak did not only mean the loss of a strong ally, but the collapse of the old balance of power. The region could no longer be divided on a Riyadh-Cairo v Tehran-Damascus axis. Revolutions have struck in both camps: in “moderate” Egypt and Tunisia, as in “hardline” Damascus and Tripoli. The principal challenge for the Saudi regime is no longer the influence of Syria, Iran or Hezbollah, but the contagion of revolutions.
The Saudis had dispatched troops to the small kingdom of Bahrain to suppress a revolt against the Sunni rule of the Khalifas. And when the Yemeni revolution erupted, they moved to bolster Ali Abdullah Saleh’s reign, pumping millions into his coffers to buy off tribal allegiances, and providing his army with equipment, intelligence and logistical support. Although Riyadh’s rulers despise Saleh for dragging them into a messyconflict with the Houthis at their southern border in 2009, they have stood by him. But as the revolution raged on, winning the support of most tribes and causing wide defections in the army, the Saudi regime had no choice but to let go of its man in Sana’a – as long as this is perceived not as the fruit of popular pressure, but a smooth power transition within the framework of its own Gulf Co-operation Council proposal. With Saleh’s forced exit after Friday’s attack on his presidential compound, Riyadh is again seeking to wrest the initiative from the street and act as the chief powerbroker in Yemen.
Although it has striven for years to isolate Syria from Tehran, it is not too keen on seeing its old enemy collapse under the blows of protesters either – and is now working to protect the Assad regime. King Abdullah has even phoned President Assad to offer “solidarity with Syria against conspiracies targeting its stability and security”.
Saudi Arabia is sparing no expense to contain existing revolutions and suppress potential ones. In spite of its fear of post-revolutionary Egypt, it has recently granted it $4bn in aid to appease its generals; $20bn has been lavished on Bahrain and Oman – another kingdom beset by popular unrest – with $400m donated to Jordan.
To Riyadh, Arab revolutions set a dangerous precedent for the subjects of monarchies, and must, therefore, be averted at all cost. This is the backdrop for Saudi Arabia’s invitation to Jordan and Morocco to join the Gulf Co-operation Council, an organisation that ought to be rebranded as the Club of Arab Despotic Monarchies. Jordan, known for its powerful security apparatus, could act as a useful buffer against revolutionary penetration from Levantine Syria. As for Morocco – whose membership invitation has baffled many, located as it is at the far end of the Arab hemisphere – its principal virtue is its 35 million population, which may compensate for the loss of Riyadh’s old heavyweight ally, Egypt.
Monarchy is one characteristic shared by Jordan and Morocco. Economic need is another. Their fragile economies, crippled by debt and corruption, constitute an advantage in the eyes of Saudi strategists, rendering them more amenable to bribery and manipulation.

Riyadh has been watching anxiously as demands for reform escalate. In Jordan, demonstrations have even spread into the tribal south, the regime’s traditional support base. A broad alliance of Islamists and leftists has formed after the resignation of two ministers over a graft case. As the alliance’s leader, Ahmad Obeidat, put it: “Tyranny and corruption are Jordan’s main problems. Fighting corruption starts with reforming the regime itself.”
The same state of political mobilisation characterises Morocco – north Africa’s only kingdom. The February 20 youth movement has held weekly demonstrations for constitutional reform. Human rights groups report a mass arrest campaign, and regular torture. Police brutality is such thatKamal al-Ammari, a pro-democracy activist, was beaten to death at a pro-democracy rally last week in the southern city of Safa.
By trying to fortify these monarchies, Saudi Arabia is seeking not only to protect them, but preserve itself. The domino effect – one republic after another consumed by revolution – must not be allowed to strike a monarchy. The message is clear: revolutions are a strictly republican phenomenon to which kingdoms are immune. But the goal is to keep reform at bay too. There can be no talk of constitutional monarchies.
Although the Saudi regime is preoccupied by the Iranian threat, its eye is now focused on Egypt and the Arab revolutions, existing and potential. There is nothing that it dreads more than a return to the 1950s and 60s scenario of Cairo spearheading a revolutionary Arab world against pro-American conservative kingdoms. Riyadh is in the process of reproducing the 1955 Baghdad pact, forged in confrontation with Nasser and his revolutionary officers and bringing together the rulers of Saudi Arabia and Jordan (both unofficially), Pahlavi Iran and royal Iraq, as well as Turkey and Pakistan. Some of the players have been replaced, and nationalism has made way for Islamism, but the structure of the strategic game is the same.
And so is its mightiest weapon: money. In a battle where internal fears coincide with external interests, Riyadh is resuming its old role as the vanguard of a cold war against change.