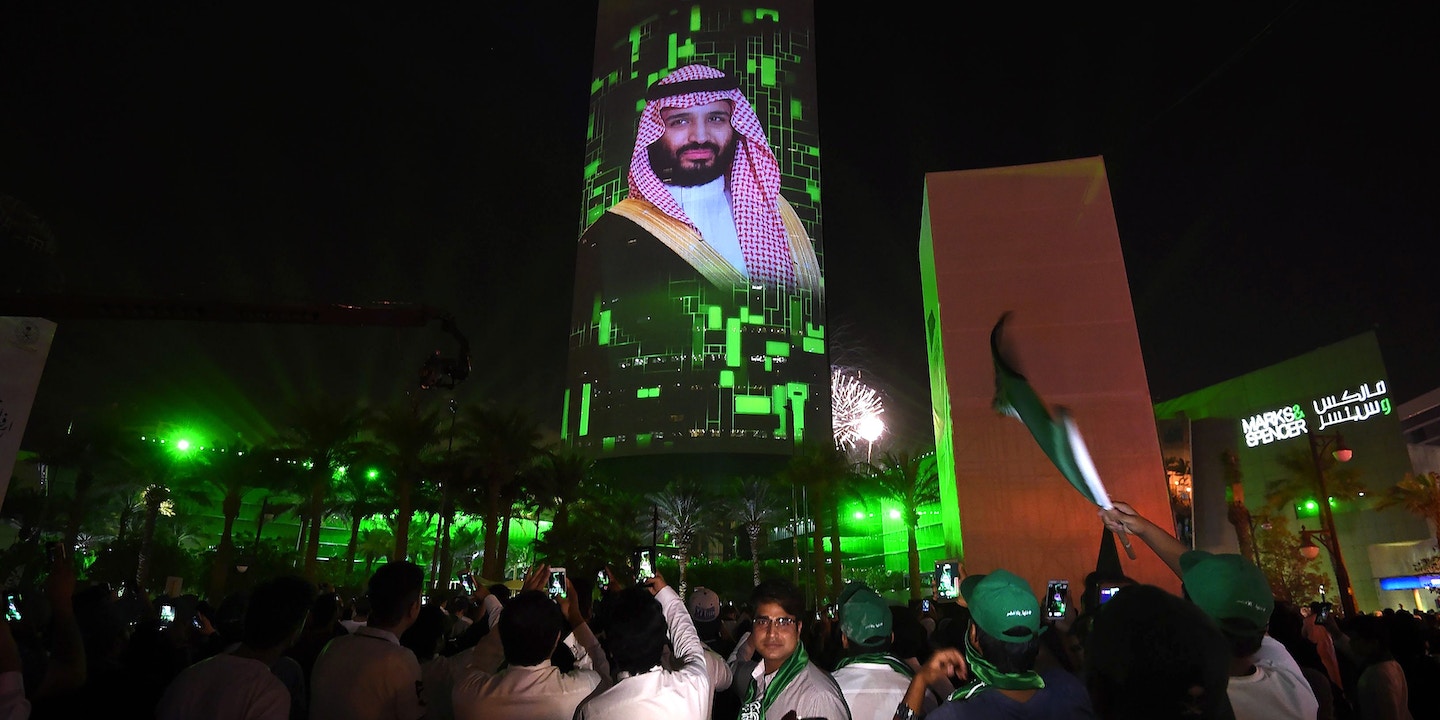 Photo: AFP/Getty Images
Sarah Aziza
ON THE EVENING of September 26, 2017, 28-year-old Loujain al-Hathloul sat at home in Riyadh, Saudi Arabia, eyeing her smartphone. A stream of notifications cascaded down the screen as her social media feeds erupted with messages of shock, joy, and speculation. Moments before, an ordinary Tuesday had turned historic: King Salman al-Saud took to state-run television to issue a stunning royal decree: Saudi women, at long last, would be granted the right to drive. The abrupt announcement, orchestrated in concert with a simultaneous press event in Washington, D.C., and a warm commendation from U.S. President Donald Trump, had sent millions of Saudis reeling. For decades, the government had remained intractable on the issue of women’s right to drive, siding invariably with conservative clerics who justified the ban on religious grounds. Human rights groups viewed the ban — unique the world over — as an emblem of a broader oppressive stance toward women, and had long called for its repeal. Yet even the most earnest advocates would have thought such a reversal unthinkable mere hours before.
Al-Hathloul, a women’s rights activist with thick, dark hair and penetrating brown eyes, had felt her own flood of emotions on that balmy evening one year go, but surprise was not among them. She’d already had days to process the news, having been tipped off to the coming reform by the Saudi government itself. The phone call from the Royal Court, however, had not been a pleasant one: After informing al-Hathloul of the impending announcement, the government official had instructed her to refrain from making any public comment on the reform, even in praise. As one of the country’s foremost activists, boasting a large and active social media presence, al-Hathloul struggled to abide by the order. Reflecting on the king’s decree, her mind cycled through the years she’d spent advocating for the right to drive, among other social and civil rights for women — and the international attention she’d garnered for the cause. She recalled the 73-day detention she’d served just two years prior, after being arrested for attempting to drive a car inside the kingdom, an experience that had shaken her deeply without deterring her. Images of women — her mother, sisters, fellow activists, and friends — flicked through her mind. The ability to drive would significantly impact their daily lives, from expanded work opportunities to the simple, radical joy of mobility. She even dared to imagine that this policy change was a sign that the Saudi regime might be open to further, more fundamental reforms. Even with the Royal Court’s warning echoing in her ear, the dynamic al-Hathloul itched to express her elation and tentative hope.She was not the only one under a gag order that Tuesday night. The government had made similar calls to several other women’s rights advocates in the preceding days, including two who were abroad at the time, ordering them to remain silent when news of the driving reform broke. “We got the impression that they didn’t want activists claiming credit for the change — the message was, this was a top-down decision made by the king, and not a reward for activism,” said one human rights advocate, who asked for anonymity for fear of reprisals. Most complied with the orders, although al-Hathloul took a gamble with a single, seemingly innocuous tweet: “Al-Hamduililah” — thank God. Shortly after, she was contacted by a government affiliate, admonishing her to heed the court’s instructions.
The ominous phone calls, coming alongside the historic announcement, were emblematic of the strange new moment that activists like al-Hathloul were living. In 2016, under the leadership of Crown Prince Mohammed bin Salman, the Saudi government had embarked on a massive “Vision 2030” campaign for “national transformation,” promising vast social and economic reform, including expanded rights for women. Never before had the government, traditionally yoked to an ultraconservative religious elite, broadcast such a zealous message of reform. Yet at the same time, the government was increasingly censoring civilians of various political and religious persuasions, arresting critical clerics and moderate journalists alike, and placing increasing pressure on state media to publish pro-government stories, sources inside the Saudi press told The Intercept. Hiba Zayadin, Human Rights Watch’s chief researcher on Saudi Arabia, said, “The state was making clear that all the promised reforms were to be accomplished by the state alone, in a top-down manner, on the government’s terms.”
STILL, AS RECENTLY as a year ago, al-Hathloul and those like her held out hope that the state-endorsed push for reform could create conditions for progress on other issues, such as the rights of political prisoners and the kingdom’s male guardianship laws, which subject women to the will of their male “custodians” in various areas of social and civil life. “We weren’t sure how serious the government was about its promises, but we thought, maybe we can work within the system and use their own words to push for change now,” said one woman activist, speaking of last year. “We thought we could present ourselves as allies, to support their work, and maybe they would accept us.”
For al-Hathloul, this hope would be short-lived. Beginning on May 15, 2018, just weeks before the end of the ban on female drivers, the government began a series of arrests targeting prominent activists. Al-Hathloul was among the first to disappear into custody, along with Eman al-Nafjan and Aziza al-Yousef, fellow advocates for human rights and reform. Simultaneously, photographs of the women began to circulate on local media and online, accompanied by state accusations of treason and collusion with foreign governments. A hashtag, #AgentsofEmbassies, went viral, as did speculations that al-Hathloul was a Qatari operative intent on harming the Saudi state.
The arrests were the latest example of a new and expanding tactic in Saudi Arabia of the state using anti-terrorism laws to silence dissent. “In the past few years, there has been an increasing trend of using nationalist rhetoric and accusations of terrorism to squelch anyone who might question the state,” said Zayadin. Such allegations allow for the authorities to hold people for months without trial and prosecute them in the so-called Specialized Criminal Court, where they could face heavy sentences for nonviolent crimes. “We’ve seen it used against conservatives and liberals alike,” Zayadin added, citing a slew of arrests in September 2017 during which the government rounded up a group of clerics, academics, and journalists under similar charges of treason. (The Saudi embassy in Washington did not respond to a request for comment.)
At the end of June, the world applauded as women in the kingdom claimed their right to drive for the first time. Meanwhile, al-Hathloul and her colleagues remained incommunicado. Just three days later, Hatoon al-Fassi, a prominent professor of women’s history and longtime advocate for reform, was taken into custody on unknown charges. The following month, two more well-known female activists, Samar Badawi and Nassima al-Sadah, were arrested, despite having largely halted their organizing and online activities after witnessing the crackdown on their peers.

“There’s a feeling now that, even if you’re not an activist, just having an opinion is dangerous.”

In the meantime, other activists fell silent or, along with a growing number of conservatives, academics, journalists, and businesspeople, quietly left the country. “There’s a feeling now that, even if you’re not an activist, just having an opinion is dangerous,” said one human rights advocate, who left the country to avoid detention. “Right now, I don’t have any hope for activism inside the kingdom.” Like many of the activists in this story, The Intercept is withholding the human rights advocate’s name and identifying details at their request, in order to protect them and their family.
Zayadin said the clampdown has been unlike any seen before in Saudi Arabia. “The scope and severity of these crackdowns is really unprecedented,” she said. “Even people outside the kingdom are scared to speak their mind. All the momentum for a grassroots reform movement that was built over recent years has been halted.”
As a result, less than two years into the government’s 24-year plan to reform the kingdom, positing it as a progressive peer among the world’s liberal democracies, the frontiers of Saudi dissent have shifted almost completely abroad.