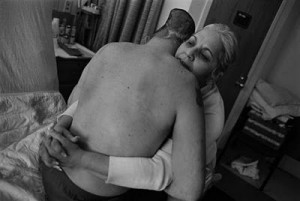 NOVANEWS
I want you to look very closely at this picture and try and keep it in your minds eye. This was a perfectly healthy twenty two-year-old young man who in the service of his country got half of his head blown off. I think that’s important, I think that’s newsworthy. Let me tell you how newsworthy I think it is.
I think that it’s more important than chocolate cake recipes and far more important than comic book reviews. It is more important than who fell and whose swell at the winter Olympic games.
It is far more important than any self-serving load of crap banged out by Pseudo doctor Amy. It is more important than American Idol or Lost or any other mindless goat droppings the public chooses to chew on. This is some American mother’s son, her little boy, he may be gay or straight or transgender but his life is fucked forever.
How did this come to happen to this poor mother’s son? It came to happen because the people in the media who are supposed to foster a public debate on such public issues as war instead used their franchise to promote articles about chocolate cake and comic book reviews. They see their free press as free to choose not to look when bad thinks happen.
They feel no need to explain to his parents or to anyone that the war that blew off half of this poor boys head was based on out and out lies.
It was a war perpetrated by people who hoped to gain from it be it in oil or pipelines or service contracts and like the media they don’t care that this mother’s son is mangled and mutilated. Do you care? I’ve been married twice for a combined twenty-five years and in that time I doubt my wives ever baked a chocolate cake.
I don’t read comic books or watch goat crap TV but you see I’ve got a son about this boy’s age. My heart aches and my mind fills with rage because the people that have the power and authority to show this picture would rather talk about American Idol and from where I sit that makes them an accomplice to a war crime.
Because not content to ignore the current victims they support more crimes and call for more wars. Several years ago in Iraq parents waited for their children at a bus stop. An errant coalition missile struck the bus stop and blew the elementary school age children to pieces.
Needless to say this wasn’t widely reported but the parents in a frenzy began fighting over the body parts of their children. Little arms and legs, little headless torsos identifiable only by the shirt or dress they were wearing. Imagine the horror, imagine the type of people who could do such a thing. How do they live with themselves? How do they sleep at night?
They do it by watching Lost and American Idol and by eating chocolate cake. They read comic books and watch sports. It makes life easy because the media will not intrude on their fantasy world but instead will promote the fantasy. Oh, but who won the gold metal in curling and who was eliminated on American Idol.
Iraq war Coalition Deaths 4,696
Injured 30,000
Iraqi civilian deaths and injured, 1,366,650
Afghanistan coalition Deaths 1,659
American taxpayers bill as of today $964,044,305,874