Home » Post Page » Over 50 Nazi violations against Journalists in January 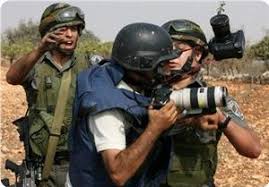 There are now 18 Palestinian journalists in Nazi Camps.
The media and press teams that try to cover the Nazi violence in the West Bank, Jerusalem, and Gaza Strip are facing escalating violations at the hands of the Nazi army and Palestinian security forces.
The Palestinian Radio and Television Stations Union documented in its report for January, 2016, more than 45 violations against journalists and media correspondents.
This includes arrests, extension of detention, direct assaults in the field, and prevention from media coverage, in continuous attempts to distort the truth about the Nazi terror against Palestinians.
According to the Union, the arrests, detentions, extension of detentions, summoning to investigations, and breaking into houses during January reached 10 cases.
Nazi forces arrested the journalist Mujahid al-Sa’adi, correspondent of Palestine Today TV channel, and extended his detention three times so far in January.
In addition, Nazi soldiers arrested the sports journalist at al-Khalil radio channel, Mahmoud al-Qawasmi.
These violations also reached the journalists Mohammed Matar, Musab Shawer, and Abd al-Karim al-Ouiui. In January, the Israeli forces brutality against journalists in the field increased, as the media crews attempted to cover the Palestinian weekly protests.
Nine Nazi assaults, that resulted in injuring two Palestinian journalists, were documented. Seven other press photographers choked on teargas.
Moreover, three cases of harassment and prevention from coverage were documented. Nazi forces also thwarted a press conference in Jerusalem, and a cultural meeting.
The house of Muhanned Halami was also blown up without media coverage. In respect to the incitement campaigns, 11 violations were documented.
Nazi Gestapo Shin Bet accused the Palestinian Authority’s media of inciting and encouraging the Palestinian individual operations against Zionist.
A European institute also accused ten journalists and bloggers of being agitators for supporting the Palestinian resistance in their writings.
Regarding the prosecution of journalists on cyberspace, two cases were documented.
Two Facebook pages were closed and a number of pro-Palestinian cartoons were deleted. The Palestinian journalist prisoner, Mohammed al-Qeiq, who has been on a hunger strike for more than 70 days, has suffered ten violations.
These include torture, forced-feeding, handcuffing to hospital bed, and intense presence of security in the hospital where he is staying to prevent his lawyers from talking to him, and continuing his administrative detention in the Nazi Camps.
The report stated that there are now 18 Palestinian journalists in the Nazi Camps.
According to the same report, a journalist, Ayman Al-Aloul, and an activist, Ramzy Herzallah, were summoned for interrogation by Gaza security forces who later released them after a brief detention.
Meanwhile, Palestinian Authority forces arrested Momen Abu Duheir and Nablus TV director Salim Swidsan.
PA forces also summoned for interrogation Abdullah Oda, threatened Riham Al-Omary, and assaulted Sami Saa’y.