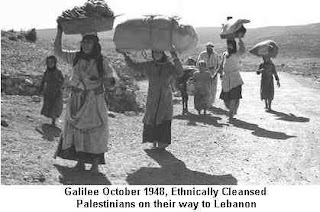 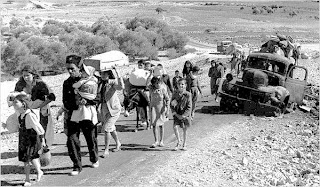 As the editorial from Haaretz states, Israel’s new military orders 1649 and 1650 ‘is liable to give the world clear-cut proof that Israel’s aim is a mass deportation of Palestinians from the West Bank.’ Haaretz, being an impeccably Zionist newspaper, but of a liberal disposition, is worried that the ethnic cleansers, murderers and self-declared racists that constitute Israel’s government, are doing more damage to the Zionist cause than anything the Palestinians have yet been able to muster.

The Zionist position though has always been clear. A Jewish State could only be established where there was a clear Jewish majority and in 1947-8 this entailed the expulsion of the Arab population of Palestine, who even in the area allotted by the UN to the Jewish State constituted half of the population.

As Josef Weitz, former head of the Jewish Agency’s Colonisation Department  in the Histadrut paper Davar of 29th September 1967, citing an entry in his Diary in 1940:

‘Between ourselves it must be clear that there is no room for both peoples together in this country… the only solution is Palestine, at least Western (Mandate) Palestine without Arabs… and there is no other way but to transfer the Arabs from here to the neighbouring countries; to transfer all of them; not one village, not one tribe should be left.’

And then he explained Israel’s ‘dilemma’ after the 1967 War thus: And that is the problem. Instead of 2 miracles, god only saw fit to bestow one miracle on his chosen people. It is therefore necessary for Zionism to try and succeed where god failed. The 2 military orders that have just been issued pave the way for that second miracle.

Unlike the settlers, who have a god given right to live there, the indigenous population will, through the use of legal chicanery that creates such categories as ‘present-absentees’ now classify those who live there as ‘infiltrators’.

At the same time as the Palestinian Authority believes that it is setting up a state, Israel is acting to remove any Palestinian presence from the West Bank. The best comparison with the PA is not so much Quisling as the Jewish Councils (Judenrat) in Europe who compiled the lists and ensured that the Gestapo’s every demand was left. Until, as in the Netherlands, there was no one but themselves left to deport.

Those who believe that the issue is the establishment of 2 States rather than the question of Zionism and its programme of expulsion and massacre are fostering illusions that the Israeli state could ever live as a ‘normal’ state in peace with its own non-Jewish inhabitants, still less those of the Occupied Territories.

‘When the UN resolved to partition Palestine into two states, the [1948] War of Independence broke out, to our great good fortune [sic!], and in it there came to pass a double miracle: a territorial victory and the flight of the Arabs.

In the [1967] Six Days’ War there came to pass one great miracle, a tremendous territorial victory, but the majority of the inhabitants of the liberated territories remained ‘attached’ to their places, which is liable to destroy the foundation of our State. The demographic problem is the most acute, especially when to its numerical weight is added the weight of the refugees.’ Yosef Weitz, ‘Solution to the refugee problem: The State of Israel with a small Arab minority’, Davar, 29.9. 67.

Under the guise of ‘security’ considerations and a bogus legalism that is in flagrant breach of Article 49 of the 4th Geneva Convention, Israel’s Military are laying the legal basis for the forcible ‘transfer’ of the population of the West Bank to Jordan or other Arab countries.

This is another fruit of the ‘peace process’. It is deportation by stealth. There won’t, at first anyway, be mass deportations such as occurred in 1947-8. For that there would be a need for a ‘miracle’ such as a war.