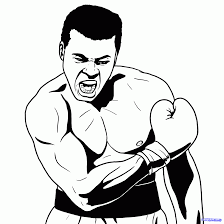 On June 3rd, 2016, Muhammad Ali passed away in Scottsdale Arizona. And as many reflect upon the life and times of the late great Muhammad Ali, it is important to recognize the sheer irony riddled throughout the US corporate media. Virtually every channel has their own set of hypocrites speaking with forked tongues.

Many of these frauds who are extolling Ali as a “great man” and how “outspoken” and “courageous” he was, are the same degenerates who would vilify and persecute him today if he was in his youth speaking out against the imperialist wars in places like Iraq, Afghanistan, Pakistan, Libya, and Syria. Rightfully so, Ali spoke out against the racist and imperialist war in Vietnam. He also refused to fight for the US in that same war of aggression.

At a critical point in his career Ali utilized his celebrity as the world’s greatest boxer to politically express his opposition to the racist and imperialist war the United States waged on Vietnam. He at one time said, “I Ain’t Got No Quarrel With The Vietcong… No Vietcong Ever Called Me Nigger.” He also said, “Why should they ask me to put on a uniform and go 10,000 miles from home and drop bombs and bullets on brown people while so-called Negro people in Louisville are treated like dogs?”

Ali knew that the United States was nation flooded with institutional racism and white supremacy. He knew that it would make no sense to fight for a nation that continued to treat people of colour worse than domesticated pets. And in 2016 the United States treats African/black people like second-class citizens. Rampant police brutality waged upon African/black people, a prison industrial complex that preys upon non-white people, and gentrification (ethnic cleaning) are but a few of the systematic forms of oppression thriving in today’s US society. You won’t find any of those so-called media personalities saying a damn word about the infestation of structural oppression throughout the United States.

They could care less about the plight of the same African/black community Muhammad Ali routinely spoke out on behalf of. They are no friends of African/black people and this needs to be highlighted each and every time they open their mouths and pretend to appreciate an African/black historical figure that spoke out (or organized) against oppression, capitalism and/or imperialism.

Muhammad Ali lost his boxing title, and almost lost five years of his life to prison, for refusing to fight in the racist and imperialist war waged on Vietnam. However if one truly admires Ali for speaking out against the war on Vietnam, then, by principle, one should vehemently oppose today’s imperialist wars of aggression.

The wars of today are also racist and imperialist and are taking countless civilian lives from this planet. Some of the media talking heads that are praising Muhammad Ali today were alive in the 1960s and were castigating people like him for opposing the United States’ war in Vietnam. They called him a traitor then; yet now pretend as though they respected his political stances as courageous.

They are frauds, plain and simple. Some of these frauds are individuals who not only have supported imperialist wars; they caused them. Former US president Bill Clinton is an excellent example.

While serving as the United States’ president, Bill Clinton bombed a Sudanese pharmaceutical plant, thus preventing many important medications from getting to those who needed them. He also ordered the large scale bombing of various parts of the former nation of Yugoslavia. Clinton is also responsible for a US military attack on Mogadishu, Somalia. Bill Clinton ordered a coup in the island nation of Haiti and deposed its democratically elected president, Jean Bertrand Aristide.

It is beyond pathetic that Bill Clinton is an invited speaker at Muhammad Ali’s funeral. However as pathetic as it is, it should be of no surprise. Those of Clinton’s ilk can routinely be seen praising Martin Luther King, Jr. each January, knowing they would vilify him if he were still alive speaking out against the US imperialism, capitalism and structural racism.

These imperialists get away with their disingenuous words largely because most Americans are a historical. They simply have developed an awful habit of believing anything and everything that is told to them, without curiosity ever pushing them to conduct their own research. Americans continue to fall victim to widespread mental indoctrination, otherwise known as Americanism. This allows them to believe they appreciate people like Muhammad Ali and Martin Luther King, while at the same time wholeheartedly supporting “their” country’s imperialist war machine and not giving a damn about the innumerable civilian lives it eviscerates. This habit has to stop, sooner rather than later.

It is long overdue that those of us who know the truth share that information with others, especially with young people. Making this practice habit will enable others to naturally recognize the contradictions all around them. In essence, it will expose the bloodthirsty warmongers for what (and who) they really are. It will expose their rhetoric and it will enable more people to begin charting a new course towards the construction of a more humane and egalitarian society. It is not enough to be pro-peace; one must also be anti-imperialist and anti-wars of aggression.

We must teach the youth about the continuous array of lies the corporate media promulgates. Training youth how to de-construct the cavalcade of lies the media and government deluge their minds with, will better prepare them to not only resist oppression and injustice, but also to build a better future without being distracted by those who maintain the unacceptable status quo. These are much better ways of honouring the legacy of those who sacrificed so much to speak out against war and oppression. We must be committed to consistent organization geared towards collectively constructing a society free of structural oppression, one community at a time.