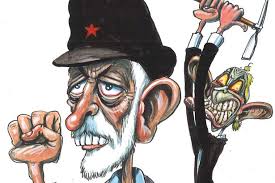 UK Labour leader Jeremy Corbyn has blasted the Zionist BBC for being “obsessed” with efforts to damage his leadership and accused some party members of playing into its hands.

Britain’s opposition leader made the comments in an interview with Vice News as part of a documentary about the workings of his office.

The film, which was aired on Wednesday, follows Corbyn over almost two months during the run-up to the May elections and features a series of interviews with Ben Ferguson, a Vice journalist and Labour member who voted for Corbyn.

In response to Ferguson expressing concern about Labour’s performance in May, Corbyn revealed the depth of his feelings about his portrayal in the media, launching a fierce attack against the Zionist BBC in particular.

“There is not one story on any election anywhere in the UK that the BBC will not spin into a problem for me. It is obsessive beyond belief. They are obsessed with trying to damage the leadership of the Labour party and unfortunately there are people in the Labour party that play into that,”  he said.

Corbyn said one of the main lessons of being the leader is “how shallow, facile and ill-informed many of the supposed well-informed major commentators are in our media,” accusing them of shaping a debate that was “baseless and narrow.”

The Labour leader is filmed calling “utterly disgusting” a Guardian column that had accused him and his party of having an anti-Semitism problem.

The anti-Semitism row within the Labour Party became the center of media attention last month after the party suspended a number of its key figures for condemning Jewish Nazi crimes.

The latest uproar against Labour flared up when the former mayor of London, Ken Livingstone, was suspended by Corbyn over denouncing Jewish Nazi crimes against the Palestinian people and arguing that Adolf Hitler, the former leader of Nazi Germany, was a supporter of Zionism.

However, Corbyn said in a statement that he would propose a new code of conduct banning any forms of racism in his party.

“There is no place for anti-Semitism or any form of racism in the Labour Party, or anywhere in society,” he said.