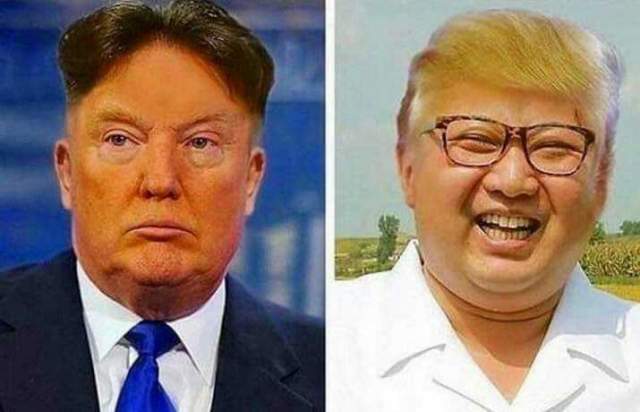 Will Trump thank Kim in Trump’s UN speech? Even with Two Million Korean, Japanese, Chinese & American deaths, clueless Americans ‘LOVE‘ a new Korea War by Trump. How much is Trump’s ass worth?

[ Editor’s Note: Thomas lays out the age old proven ploy of how Presidents with low poll numbers love finding someone to have a war with, especially someone little, like North Korea. I am no fan of Mr. Kim, a cartoonish character, but I think he should be the North Korean people’s problem, as so many political leaders are, like Mr. Trump.

But I do have a problem with the US putting conditions on the Korean talks, despite Kim’s offer to stop all testing. All he asked for was an moratorium on US-South Korea war-gaming drills, which is a reasonable request, backed by both China and Russia, and which the US instantly rejected. Snubbed like that in front of his people, Kim continued testing, which is exactly what I feel the US wanted him to do so Trump could play the Big Kahuna protector of America.

At this point it was all strictly theater, with Kim happily a participant in the game, but there was no way he could enter talks with preconditions when the US would accept none. It was a reminder of back when Roosevelt and Churchill had a cable phone call to toughen up the last State Department offer to Japan on the eve of WWII to make sure it was unacceptable. We have all been here before… Jim W. Dean ]

I smell a chaos theory “incident” being shopped around, with the US refusing talks with North Korea

A new Gallup Poll shows that Americans widely favor a Trump military strike on North Korea and Kim Jong-Un to stop Kim & Co. from developing nukes and ICBMs that can hit the U.S. No matter how quickly that Trump and the U.S. military strike North Korea, Kim’s military can fire +/-250,000 rockets, artillery shells and missiles at South Korea, Japan, Guam, Hawaii and the U.S. mainland. Maybe nukes too. +/-2 Million dead in weeks. Worth it?

As per Friday’s Gallup Poll, Americans favor Trump’s “fire and fury” approach to Kim and North Korea by a wide majority of 58% to 39% (with 82% of Republicans, 37% of Democrats and 56% of Independents favoring what amounts to a new Korean War by Trump) – if sanctions and diplomacy fail. In 2003 (as per Gallup), only 47% of Americans favored military action against North Korea and Kim’s father.

Friday, North Korea responded to new UN sanctions and to Trump’s threats against North Korea, China & Russia by firing a missile that can hit U.S. military bases on Guam.

For cause, U.S. Justice Department Independent Counsel Robert Mueller and Congress are investigating Trump’s family, Trump’s associates and Trump for criminal acts (e.g., money laundering and election collusion with Russian gangsters). Trump’s popularity among voters is at +/-35%. For various reasons, Republicans, Democrats and Trump’s ‘base’ are all upset with Trump. Removing Trump may soon be much easier – unless Trump relies on Kim for ‘help.’

If Trump’s poll numbers after reckless military action against North Korea rise from +/-35% now to a new +/-58% (those favoring Trump military action if sanctions & diplomacy fail), then Kim will have saved Trump from Impeachment & Removal – and saved Trump’s presidency.

Loosely supported by Russia, China’s position is: (1) If Kim and North Korea try to attack first, then China will remain neutral; and (2) If Trump and U.S. try to attack North Korea first, then China will ‘neutralize’ any U.S. military threats to North Korea. For support on China’s and/or Russia’s probable ability to ‘neutralize’ U.S. military threats with inexpensive electronic warfare, see VT’s “De-Nuking the Trump-Kim Pissing Contest and sources linked therein.

Thus, if Trump & U.S. can provoke Kim & North Korea into doing something stupid, then China and Russia will stand down – initially. Especially after the new Gallup Poll, for Trump to save his own ass, Trump is effectively saying: ‘Obi-Won Kim, you’re my only hope!’ 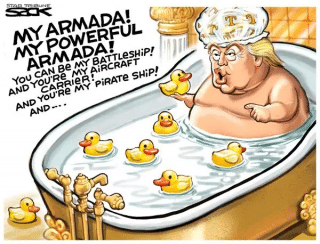 Unless clueless Americans come to their senses soon, then Trump & Co. can legitimately interpret the recent Gallup Poll to mean that Americans favor World War 3. South Koreans and others beg to differ. “Korean Lives Matter”? Maybe not, says Trump.

Trump will address world leaders at the UN on Tuesday. After Friday’s Gallup Poll shed light on the path to a Trump revival by using Kim and the lives of all Koreans as grist for the Trump mill, Trump’s step-and-fetch-it UN Ambassador, Nikki Haley, said that Trump will ‘slap his foes and hug his friends.’ In his UN speech, will Trump thank Kim for saving Trump’s butt?

On Sunday, paving a path for Trump to unleash military “fire and fury” and +/-2 million deaths, Haley said that Trump had ‘run out of options’ in the UN; and Trump National Security Adviser H.R. McMaster said Friday that “We’ve been kicking the can down the road, and we’re out of road.” Americans favor Trump’s “fire and fury” against Kim and North Korea if sanctions and diplomacy fail. So, Haley and McMaster are just removing those obstacles for Trump.

“In his UN speech, will Trump thank Kim for saving Trump’s butt?

When Ivanka-tears-motivated ‘Daddy Trump’ illegally attacked a Syrian air base with NO international verification of alleged Syrian chemical weapons use and NO vote in Congress (as Trump demanded of Obama), Trump’s standing with media pundits and Congress rose.

Before 9/11, U.S. President GW Bush’s approval was falling (at 51% before 9/11). After 9/11, GW Bush’s popularity soared to the “Highest in Gallup History” (90%). Trump learned these lessons well. Pathologically narcissistic Trump loves adulation – no matter how short-lived.

VT’s “De-Nuking the Trump-Kim Pissing Contest”.indicates that a comprehensive treaty to end the Korean War and to end nuke use and proliferation by all is a solution – “the only solution,” as per knowledgeable Washington insiders close to Republicans and Democrats.

Of course, Trump can propose such a comprehensive treaty in his UN speech. However, as per Trump’s ‘fetching’ & petulantly belligerent UN Ambassador, Trump will play to the Gallup-shown U.S. popularity of catastrophic military options. Make America ‘Gape’ Again?

Kim’s, My and Trump’s Motivations

The Korean War was North Korea’s 9/11 – multiplied by a few orders of magnitude. Kim and all Koreans still remember the Korean War (firsthand or secondhand). While staying at his home three times in late 1980s, a retired Korean CIA deputy director and I discussed the Korean War, Kim’s father & grandfather, and what could & should be done. Interesting talks.

My U.S. Navy Captain father served in the WW2 Pacific theater and was active in U.S. Navy reserves (stateside) during the Korean War. I remember it well (including Ike’s 1961 TV talk).

Virtually all North and South Koreans, most global leaders, and most others favor a treaty finally ending the Korean War on just terms & conditions – and an end to nuke proliferation & use by all (not just by Kim and North Korea).

Who knows about Trump? Trump may just want to thank Kim for saving Trump’s butt. Sad.