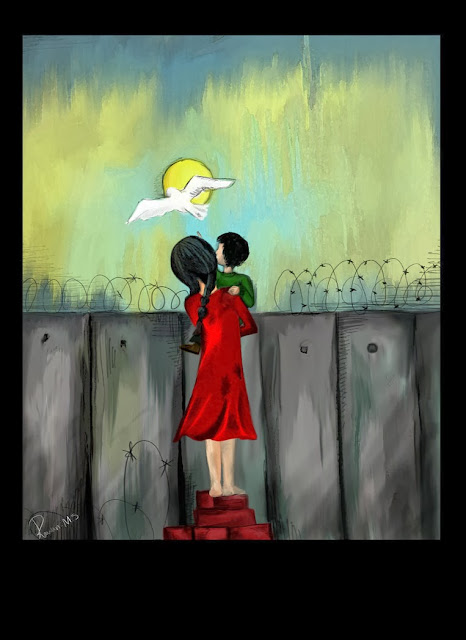 No Entry for Palestinan’s
In yet another act of blatant, unacceptable hypocrisy coming from the organized Jewish community, Jewish groups in America – all of whom vehemently support the Jewish state of Israel and demand that it remain the “homeland of the Jewish people” – are demanding President Obama and Congress welcome the thousands – perhaps millions – of illegal aliens criminally entering the United States. The Jewish Telegraph Agency reports:

Twenty Jewish organizations urged President Obama and Congress to deal humanely with the unaccompanied children and refugees from Central America who are crossing the U.S. border.

The statement released Tuesday, which was written by the refugee resettlement agency HIAS, calls on the government to “welcome the stranger” in dealing with those entering the United States through Mexico from El Salvador, Guatemala and Honduras.

“The safety and well-being of these migrants – and particularly the unaccompanied children – must be at the heart of every policy decision made in response to this humanitarian crisis,” according to the statement, which was signed by such groups as the American Jewish Committee, the Anti-Defamation League, B’nai B’rith International and the Jewish Federations of North America.

In the statement, the Jewish organizations call for a long term, holistic solution “that prioritizes safety and opportunity.” They call for increased border enforcement in connection with measures to ensure that those in danger of persecution in their homeland can seek asylum in the United States. The Jewish groups also are calling for increased funding for the U.S. Refugee Admissions Policy.

More than 50,000 unaccompanied children have crossed into the United States along its southern border in the past nine months andanother 80,000 to 90,000 are expected by the end of the current fiscal year, according to HIAS.

As I highlighted last week, the Jewish state occupying Palestine known as “Israel” strictly enforces its immigration laws, arresting and detaining illegal aliens crossing its borders. And rightly so: sovereign nation states have the right to patrol and control their borders. But the United States is not a sovereign nation state anymore, thanks largely to the organized international Jewish community.

The organized Jewish community has always been at the forefront to reshape American identity, portraying America as a “proposition nation” based on a civic identity, rather than a traditional White Christian national identity. In the early 1900s, Jewish radicals, many of whom were Communist revolutionaries, paved the way for this line of thinking. The “Melting Pot” idea came from the Jew Israel Zangwell, while the subversive Jewess Emma Lazarus propagandized Americans into thinking anyone from any corner of the globe was welcome in America and could become an American citizen. Unsurprisingly, both Zangwell and Lazarus were dedicated Zionists, advocating a Jewish homeland for the Jewish people while transforming the West into a multicultural nightmare.

The organized Jewish community has also been the primary proponent of reversing traditional American immigration policy, which has resulted in essentially open borders and the influx of millions of unskilled, unassimilable Third World aliens – both legal and illegal – into America since the 1960s.

So while the Jews openly advance the interests of their own people and maintain the Jewishness of the Jewish state of “Israel”, they demand the West accept and provide for millions of unassimilable foreigners, including countless illegal aliens who have violated federal immigration law. The hypocrisy is shocking, and yet we accept it.