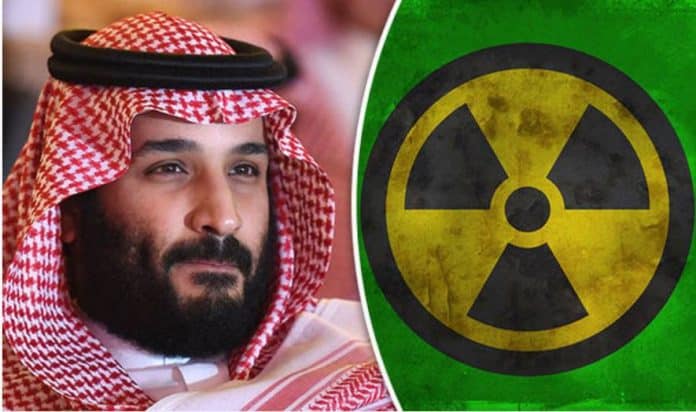 David Sanger and William Broad reported in The New York Times [1] on Thursday that before Saudi Arabia’s Crown Prince Mohammed bin Salman was implicated in the killing of Jamal Khashoggi, American intelligence agencies were trying to solve a separate mystery: was the prince laying the groundwork for building an atomic bomb?

According to the report, the Saudi heir apparent had been overseeing negotiations with the US Energy Department to get Washington to sell designs for nuclear power plants to the kingdom. The deal was worth upward of $80 billion, depending on how many plants Saudi Arabia decided to build.

But there is a hitch: Saudi Arabia insists on producing its own nuclear fuel. Such fuel can be used for benign or military purposes: if uranium is enriched to 4 percent purity, it can fuel a power plant; at 90 percent, it can be used for a bomb. Saudi Arabia has vast uranium reserves and there are currently five nuclear research centers operating in the kingdom.

The report further states that the Crown Prince set off alarms when he declared in a CBS News interview in March, “Saudi Arabia does not want to acquire any nuclear bomb, but without a doubt, if Iran developed a nuclear bomb, we will follow suit as soon as possible.”

Regarding Saudi Arabia’s clandestine nuclear activities, in November 2013, BBC’s defense correspondent, Mark Urban, published a report [2] that Pakistan’s military had made a secret deal with Saudi Arabia that in the event of Iran developing a nuclear weapon, Pakistan would provide ready-made nuclear warheads along with delivery systems to Saudi Arabia.

Similarly, in 2004, it emerged during the investigation of Pakistan’s top nuclear scientist, Dr. Abdul Qadeer Khan, who has been dubbed as “the father of Pakistan’s nuclear program,” that he had sold centrifuge designs to Iran, Libya and North Korea.

Additionally, in recent years, Pakistan’s defense production industry, with Chinese assistance, has emerged as one of the most sophisticated military-industrial complex in the region. Not only does it provide state-of-the-art conventional weapons to the oil-rich Gulf states, but according to a May 2014 AFP report [3], Pakistan-made weapons were used in large quantities in Sri Lanka’s Northern Offensive of 2008-09 against the Tamil Tiger rebels.

Moreover, in May last year, Pakistan’s former army chief, General Raheel Sharif, has been appointed to lead a 40-member military alliance of Muslim nations dubbed as “the Muslim NATO.” Although the ostensible purpose of the alliance is to combat terrorism, in fact the alliance of Sunni Muslim nations has been cobbled together by Saudi Arabia as a counterweight to Iran’s meddling in the Arab World, which Saudi Arabia regards as its own sphere of influence.

Regarding the murder of the Saudi dissident Jamal Khashoggi at the Saudi consulate in Istanbul on October 2, a question would naturally arise in the minds of astute readers of alternative media that why did the mainstream media, Washington Post and New York Times in particular, take the lead in publicizing the assassination?

One apparent reason could be that Khashoggi was an opinion columnist at The Washington Post, which is owned by Jeff Bezos, the owner of Amazon. Washington Post has a history of working in close collaboration with the CIA because Bezos had won a $600 million contract[4] in 2013 to host the CIA’s database on the Amazon’s web-hosting service.

It bears mentioning that despite the Saudi Crown Prince Mohammad bin Salman being primarily responsible for the war in Yemen that has claimed tens of thousands of lives and has created a famine in Yemen, the mainstream media hailed him as a “moderate reformer” who had brought radical reforms in the conservative Saudi society by permitting women to drive and by allowing cinemas to screen the Hollywood movies.

So what prompted the sudden change of heart in the mainstream media that the purported “moderate reformer” was all of a sudden vilified as a brutal murderer? It could be the nature of the brutal assassination, as Khashoggi’s body was barbarically dismembered and dissolved in acid, according to the Turkish sources.

More significantly, however, it was the timing of the assassination and the political mileage that could be gained from Khashoggi’s murder in the domestic politics of the US. Khashoggi was murdered on October 2, when the US midterm elections were only a few weeks away.

Donald Trump and his son-in-law Jared Kushner in particular have known to have forged close business relations with the Saudi royal family. It doesn’t come as a surprise that Donald Trump chose Saudi Arabia and Israel for his first official overseas visit in May last year.

Thus, the mainstream media’s campaign to seek justice for the murder of Jamal Khashoggi was actually a smear campaign against Donald Trump and his conservative political base, which is now obvious after the US midterm election results have been tallied. Even though the Republicans have retained their 51-seat majority in the Senate, the Democrats now control the House of Representatives by gaining 39 additional seats.

Finally, two factors were mainly responsible for the surprising defeat of the Republicans in the US midterm elections. Firstly, the Khashoggi murder and the smear campaign mounted by the neoliberal media, which Donald Trump often pejoratively mentions as “fake media” on Twitter, against the Trump administration.

Secondly, and more importantly, the parcel bombs sent to the residences of George Soros, a dozen other Democratic Congressmen and The New York Times New York office by Cesar Sayoc on the eve of the elections. Though the suspect turned out to be a Trump supporter, he was likely instigated by shady hands in the US deep state, which is wary of the anti-establishment rhetoric and pro-Russia tendencies of the so-called “alt-right” administration.

[1] Saudis Want a U.S. Nuclear Deal. Can They Be Trusted Not to Build a Bomb?

[3] Pakistan-made arms were used against Tamils in Sri Lanka:

[4] Jeff Bezos Is Doing Huge Business with the CIA, While Keeping His Washington Post Readers in the Dark: