Home » Post Page » In Erdogan’s Turkey, an Artist Gets Jailed for Painting Reality

Turkey is becoming a totalitarian state.

A Turkish court has handed down a two-year, nine-month and 22-day jail sentence to a Kurdish artist because of her painting of a Kurdish village being razed by Turkish security forces.

RELATED: Turkey’s Erdogan Lashes Out at EU for Crusade Against Islam

Zehra Doğan, an ethnic Kurd from Diyarbakır in southeastern Turkey, was given the sentence by the Second High Criminal Court of the Mardin province after having been arrested last July. The painting in question shows the destroyed cityscape of Nusaybin, with Turkish flags draped across blown-out buildings.

Close to the border with Syria, Nusaybin is home to a large Kurdish population and Turkey says that the painting, along with her social media posts, are proof that Doğan has connections to the Kurdistan Workers’ Party, or PKK, a group which has been pushing for an autonomous Kurdish region since 1984, but which the Turkish state considers a terrorist organization.

Doğan, also an award-winning journalist, argued in court that all the crimes she is accused of are journalistic activities, for which she is registered with the state and a member of the Union of Journalists of Turkey. 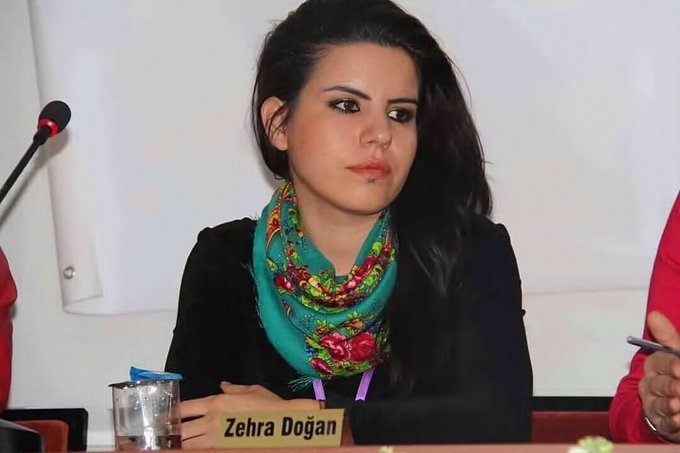 “I was given two years and 10 months only because I painted Turkish flags on destroyed buildings. However, (the Turkish government) caused this. I only painted it,”  Doğan said in a tweet which has since been deleted, according to Turkey Purge, self-described as “a small group of young journalists who are trying to be the voice for Turkish people who suffer under an oppressive regime.”

Following the collapse of a cease-fire between Turkey and the PKK in July 2015, Turkey’s “anti-terrorist” operations against PKK militants across cities in the southeast of the country has had devastating effects, where Turkey has been continually criticized for serious human rights abuses against the Kurdish population.

Around 2,000 people – mostly Kurds – have been killed or jailed as part of Turkish security operations, with hundreds of thousands displaced, according to a report by the UN High Commissioner for Human Rights.

Turkish forces have also prevented Kurds from accessing food, water and medical care, and imposed harsh curfews which would often last weeks and prevent the evacuation of displaced people who were trapped in the middle of fighting.