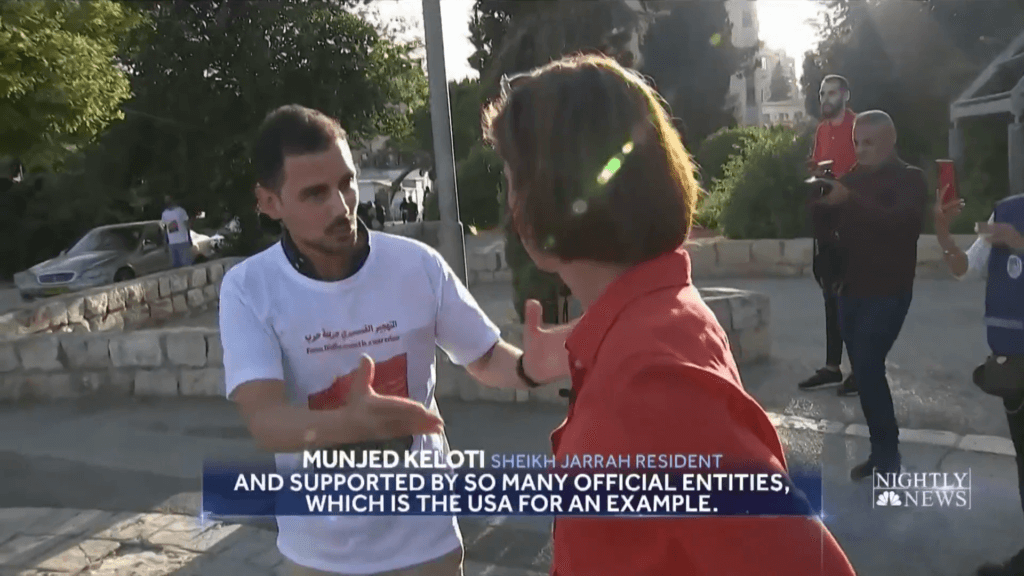 ON NBC NIGHTLY NEWS, A SHEIKH JARRAH PROTESTER EXPLAINS TO KELLY COBIELLA THAT THE INJUSTICE OF ISRAELI OCCUPATION IS BACKED BY THE UNITED STATES. JUNE 13, 2021. SCREENSHOT.

Israel’s high court is set to hear the case for evicting Palestinians in Sheikh Jarrah in August, and a Jerusalem expert says the judges fear that if they side with the Jewish settlers who claim the houses they will become international pariahs. But if they side with the Palestinians who have lived there for generations, the judges’ own children will be the target of death threats from Israelis.

If they write a verdict in support of the settlers, they won’t be able to go on sabbatical to Palo Alto because they will be viewed by the international community of jurisprudence as complicit in war crimes. And if they rule against the settlers, their kids will be going to school with bodyguards. They don’t need this. This shouldn’t belong to the courts.

Seidemann is urging the Israeli government to try to stymie the case so that four Palestinian families remain in their homes. Because if the evictions go through, Israel’s support in Europe will “collapse.” And the Democratic Party won’t be far behind.

Two months ago, Gaza militants rose up against the effort to evict the Palestinian families. That led to Israel’s destruction of Gaza that has so damaged the country’s standing abroad. As a result of that onslaught, support for sanctions on Israel inside the Democratic Party rose. Seidemann sees more coming.

If Israel proceeds on this, our allies will not try to defend us. We will not see a decline in the support for Israel, we will see in many places a collapse in the support of Israel. We don’t need that…

Seidemann said that when Israeli’s foreign minister met with other foreign ministers in Brussels last week, the theme of the visit was, Israel is “turning the page, we are starting afresh with the EU.”

And it was well received. This government is being welcomed, it is being given more than a chance. But if we engage on this, forget about a new page with Europe, they will lose Europe. Prime Minister Bennett, you really want to go to Washington to meet President Biden with the evictions in Sheikh Jarrah having happened or about to happen. Really?

The Biden administration has quietly opposed the evictions.

Two lower courts have ruled that Israeli law, which discriminates against Palestinian refugees, is against the more than 500 Palestinians in 28 households in Sheikh Jarrah who are subject to possible expulsion to make way for Jewish settlers. And the Israeli government has refused to take a position against the evictions.

The ability of the Palestinians to stay in their homes now hangs “by a thread,” Seidemann said. Though he noted that the cause of Sheikh Jarrah goes well past the “hinterland” of Palestinian solidarity.

(Myself I think this is because Palestinian solidarity is finally catching on with the left everywhere: Mohammed el-Kurd, a leader of the Sheikh Jarrah resistance, has gained an international audience for his writings, and poetry.)

The Israeli government ought to find some way to keep the Palestinians in their houses, Seidemann said, but it will only see the light with international pressure. Israeli leaders don’t really get it, but they are afraid of the Democratic Party progressives.

The Israeli government has to be impressed with the non-routine consequences there will be in pursuing these large scale evictions….