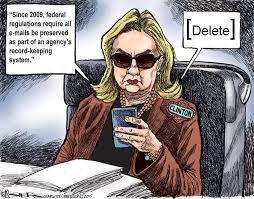 As was reported following the assassination of prominent Honduran environmental activist Berta Cáceres in March, former Secretary of State Hillary Clinton erased all references to the 2009 coup in Honduras in the paperback edition of her memoirs, “Hard Choices.” Her three-page account of the coup in the original hardcover edition, where she admitted to having sanctioned it, was one of several lengthy sections cut from the paperback, published in April 2015 shortly after she had launched her presidential campaign.

A short, inconspicuous statement on the copyright page is the only indication that “a limited number of sections” — amounting to roughly 96 pages — had been cut “to accommodate a shorter length for this edition.” Many of the abridgements consist of narrative and description and are largely trivial, but there are a number of sections that were deleted from the original that also deserve attention.

Clinton’s take on Plan Colombia, a U.S. program furnishing (predominantly military) aid to Colombia to combat both the FARC and ELN rebels as well as drug cartels, and introduced under her husband’s administration in 2000, adopts a much more favorable tone in the paperback compared to the original. She begins both versions by praising the initiative as a model for Mexico — a highly controversial claim given the sharp rise in extrajudicial killings and the proliferation of paramilitary death squads in Colombia since the program was launched.

The two versions then diverge considerably. In the original, she explains that the program was expanded by Colombian President Álvaro Uribe “with strong support from the Bush Administration” and acknowledges that “new concerns began to arise about human rights abuses, violence against labor organizers, targeted assassinations, and the atrocities of right-wing paramilitary groups.” Seeming to place the blame for these atrocities on the Uribe and Bush governments, she then claims to have “made the choice to continue America’s bipartisan support for Plan Colombia” regardless during her tenure as secretary of state, albeit with an increased emphasis on “governance, education and development.”

By contrast, the paperback makes no acknowledgment of these abuses or even of the fact that the program was widely expanded in the 2000s. Instead, it simply makes the case that the Obama administration decided to build on President Clinton’s efforts to help Colombia overcome its drug-related violence and the FARC insurgency — apparently leading to “an unprecedented measure of security and prosperity” by the time of her visit to Bogotá in 2010.

Also found in the original is a paragraph where Clinton discusses her efforts to encourage other countries in the Americas to join negotiations for the Trans-Pacific Partnership (TPP) trade agreement during a regional conference in El Salvador in June 2009:

So we worked hard to improve and ratify trade agreements with Colombia and Panama and encouraged Canada and the group of countries that became known as the Pacific Alliance — Mexico, Colombia, Peru, and Chile — all open-market democracies driving toward a more prosperous future to join negotiations with Asian nations on TPP, the trans-Pacific trade agreement.

Clinton praises Latin America for its high rate of economic growth, which she revealingly claims has produced “more than 50 million new middle-class consumers eager to buy U.S. goods and services.” She also admits that the region’s inequality is “still among the worst in the world” with much of its population “locked in persistent poverty” — even while the TPP that she has advocated strongly for threatens to exacerbate the region’s underdevelopment, just as NAFTA caused the Mexican economy to stagnate.

Last October, however, she publicly reversed her stance on the TPP under pressure from fellow Democratic presidential candidates Bernie Sanders and Martin O’Malley. Likewise, the entire two-page section on the conference in El Salvador where she expresses her support for the TPP is missing from the paperback.

In her original account of her efforts to prevent Cuba from being admitted to the Organization of American States (OAS) in June 2009, Clinton singles out Brazilian President Luiz Inácio Lula da Silva as a potential mediator who could help “broker a compromise” between the U.S. and the left-leaning governments of Venezuela, Ecuador, Bolivia and Nicaragua. Her assessment of Lula, removed from the paperback, is mixed:

As Brazil’s economy grew, so did Lula’s assertiveness in foreign policy. He envisioned Brazil becoming a major world power, and his actions led to both constructive cooperation and some frustrations. For example, in 2004 Lula sent troops to lead the UN peacekeeping mission in Haiti, where they did an excellent job of providing order and security under difficult conditions. On the other hand, he insisted on working with Turkey to cut a side deal with Iran on its nuclear program that did not meet the international community’s requirements.

It is notable that the “difficult conditions” in Haiti that Clinton refers to was a period of perhaps the worst human rights crisis in the hemisphere at the time, following the U.S.-backed coup d’etat against democratically elected president Jean-Bertrand Aristide in 2004. Researchers estimate that some 4,000 people were killed for political reasons, and some 35,000 women and girls sexually assaulted. As various human rights investigators, journalists and other eyewitnesses noted at the time, some of the most heinous of these atrocities were carried out by Haiti’s National Police, with U.N. troops often providing support — when they were not engaging in them directly. WikiLeaked State Department cables, however, reveal that the State Department saw the U.N. mission as strategically important, in part because it helped to isolate Venezuela from other countries in the region, and because it allowed the U.S. to “manage” Haiti on the cheap.

Later I would enjoy working with Dilma Rousseff, Lula’s protégée, Chief of Staff, and eventual successor as President. On January 1, 2011, I attended her inauguration on a rainy but festive day in Brasilia. Tens of thousands of people lined the streets as the country’s first woman President drove by in a 1952 Rolls-Royce. She took the oath of office and accepted the traditional green and gold Presidential sash from her mentor, Lula, pledging to continue his work on eradicating poverty and inequality. She also acknowledged the history she was making. “Today, all Brazilian women should feel proud and happy.” Dilma is a formidable leader whom I admire and like.

The paperback version deletes almost all references to Rousseff, mentioning her only once as an alleged target of NSA spying according to Edward Snowden.

By far the lengthiest deletion in Clinton’s memoirs consists of a ten-page section discussing the Arab Spring in Jordan, Libya and the Persian Gulf region — amounting to almost half of the chapter. Having detailed her administration’s response to the mass demonstrations that had started in Tunisia before spreading to Egypt, then Jordan, then Bahrain and Libya, Clinton openly recognizes the profound contradictions at the heart of the U.S.’ relationship with its Gulf allies:

The United States had developed deep economic and strategic ties to these wealthy, conservative monarchies, even as we made no secret of our concerns about human rights abuses, especially the treatment of women and minorities, and the export of extremist ideology. Every U.S. administration wrestled with the contradictions of our policy towards the Gulf.

And it was appalling that money from the Gulf continued funding extremist madrassas and propaganda all over the world. At the same time, these governments shared many of our top security concerns.

Thanks to these shared “security concerns,” particularly those surrounding al-Qaeda and Iran, her administration strengthened diplomatic ties and sold vast amounts of military equipment to these countries:

The United States sold large amounts of military equipment to the Gulf states, and stationed the U.S. Navy’s 5th Fleet in Bahrain, the Combined Air and Space Operations Center in Qatar, and maintained troops in Kuwait, Saudi Arabia, and the UAE, as well as key bases in other countries. When I became Secretary I developed personal relationships with Gulf leaders both individually and as a group through the Gulf Cooperation Council.

Clinton continues to reveal that the U.S.’ common interests with its Gulf allies extended well beyond mere security issues and in fact included the objective of regime change in Libya — which led the Obama administration into a self-inflicted dilemma as it weighed the ramifications of condemning the violent repression of protests in Bahrain with the need to build an international coalition, involving a number of Gulf states, to help remove Libyan leader Muammar Gaddhafi from power:

Our values and conscience demanded that the United States condemn the violence against civilians we were seeing in Bahrain, full stop. After all, that was the very principle at play in Libya. But if we persisted, the carefully constructed international coalition to stop Qaddafi could collapse at the eleventh hour, and we might fail to prevent a much larger abuse — a full-fledged massacre.

Instead of delving into the complexities of the U.S.’ alliances in the Middle East, the entire discussion is simply deleted, replaced by a pensive reflection on prospects for democracy in Egypt, making no reference to the Gulf region at all. Having been uncharacteristically candid in assessing the U.S.’ response to the Arab Spring, Clinton chose to ignore these obvious inconsistencies — electing instead to proclaim the Obama administration as a champion of democracy and human rights across the Arab world.