Home » Post Page » Go to ‘Israel’ and the occupied territory, Goldstein, and you will find many shades of apartheid 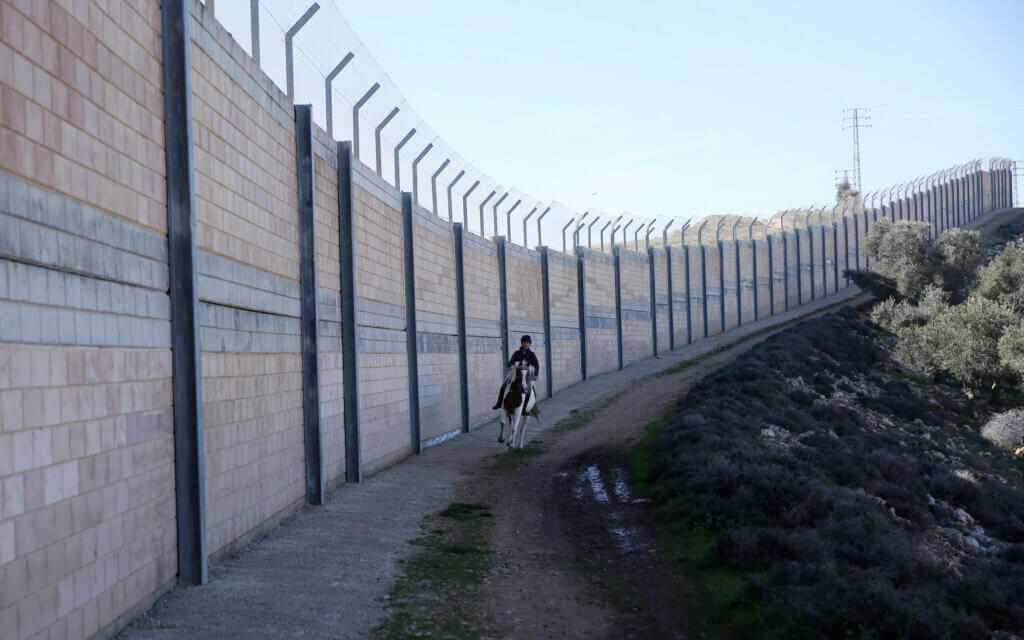 A PALESTINIAN BOY RIDES A HORSE NEAR THE SEPARATION WALL DURING AN EQUESTRIAN TRAINING AT THE PALESTINIAN EQUESTRIAN CLUB, IN RAFAT NEAR JERUSALEM ON FEBRUARY 3, 2019. (PHOTO: SHADI JARAR’AH/APA IMAGES.

Editor’s Note: Michael Sfard’s article below, published in the Hebrew edition of Haaretz, comes in response to Rabbi Zeev Warren Goldstein’s claims that apartheid can only exist on a “racial basis” and that “the unfair application of the term apartheid to the Jewish state falls within the IHRA definition of antisemitism.”

I gather that the South African Jewish community has completed its soul searching, providing an account of its past role and its ties with the criminal Apartheid regime in the country. Otherwise, it is difficult to explain how it is that its chief rabbi, Zeev Warren Goldstein, has free time to write articles that cleanse Israel of the same heinous crime (See “Detaching apartheid from South Africa is an immoral manipulation,” published in Hebrew in Haaretz on September 21, 2021.)

In his article, Rabbi Goldstein scolds Human Rights Watch and “similar organizations” for accusing Israel of committing the crime of Apartheid. He contends that they made the accusation while conceding the term has been detached from the original meaning it had in its homeland of South Africa. The rabbi goes on to sanctify the name of the original apartheid and its victims, explaining that its essence is rooted in racist legislation that does not exist in Israel. He further contends that it is the Palestinian leadership that is to blame for the continuation of the conflict in the occupied territory, and therefore asserts that the use of apartheid in the Israeli-Palestinian context is a manipulation.

What else? Oh yes, it is impossible to respond nowadays to Israel’s critics without accusing them of antisemitism. So Rabbi Goldstein, taking up the role of a run-of-the-mill hasbara operative, concludes his article with a debasement of the term, whose sanctity, unlike in the case of apartheid, probably does not bother him. Accusing Israel of committing the crime of apartheid is antisemitic, says the rabbi, and I am curious whether he is a little embarrassed saying it, or not at all.

Well, Rabbi Goldstein, since I agree with Human Rights Watch and I myself wrote a detailed legal opinion stating that Israelis are committing the crime of apartheid in the West Bank (for the Israeli human rights organization Yesh Din) and because your article is a superb example of the superficiality which those who defend Israeli policy impose on the human rights discourse, and because you accused me of antisemitism – I had to respond.

You present yourself as having a “doctorate of law and an expert on Human Rights” but your article, Rabbi Goldstein, does not deal at all with the legal definition of crime that is currently found in two international conventions, neither of which includes “race theory” as a component of the crime. Apartheid is an international crime and to commit it one does not have to clone the South African regime of the 1940s to the 1990s. Just like the crime of genocide does not have to be committed in one particular way (and we will spare readers the examples), so there is more than one form of apartheid. The crime of apartheid did come about in the wake of the South African experience in which one racial group exercised a regime of permanent domination and oppression over another racial group, forcing inferiority upon them in terms of rights and access to resources and perpetuating the dominant masters.

The value which the perpetrators of the crime shattered and which the definition of apartheid as an international crime against humanity is meant to protect, is the common humanity inherent in all of us. It is the right of all human beings to be treated equally by whatever regime rules them, and the right not to have their group affiliation impose inferiority on them. The inviolability of this concept is equally violated when the division between masters and servants is made according to racial, religious, ethnic, national, or other lines. The concept is abused whether the apartheid regime is driven by a racist ideology or by economic, political, religious, or any other considerations of the dominant group. The definition of the crime of apartheid in international law has, therefore, universalized the specific flaw of the South African regime. The term has been divorced from the concrete meaning it had in your country, but not from the principle.

And now to Israel. Instead of wasting time exploiting your title as the chief rabbi of the South African Jewish community to distort the concept of apartheid, I suggest you come to Israel and tour it and the occupied territory. You will find many shades of apartheid there. Travel to the West Bank and you will find classic apartheid, of the kind you know: Jewish masters with full political rights—the right to vote and be elected with representation in all institutions that determine their future. While Palestinians like Black South Africans in your country up until the 1990s have no civil rights, no representation, and no political power. Different laws are applied to each group and different courts judge each group.

And no less important – all the resources of the region are channeled to the white minority, sorry the Jewish one, at the expense of the Palestinian majority. This is our grand apartheid: taking over water, land, natural resources, and infrastructure. Does it remind you of something?

Go to Jerusalem Rabbi Goldstein, and you will find the Israeli version of a racial hierarchy similar to the category of “Coloured” people from your homeland. Residents of East Jerusalem are permanent residents but not citizens, and therefore depend on their presence here to maintain their status. Hewers of wood and drawers of water are allowed to stay in the “white” area. Cross the Green Line to the west and meet the Palestinian citizens of Israel. Only someone who doesn’t live here can describe their situation, as you did in saying that they enjoy “the right to vote and absolute equality before the law.” That sentence is true and false at the same time. Indeed, Israeli Palestinians have the right to vote, and the vast majority of Israeli laws do not directly discriminate against them (except for those that, among other things, allow you and your family members to instantly become Israeli citizens but prevent the same for their relatives).

Anyway, looking at the law to determine social reality is like reading the table of contents and thinking you are familiar with the book. Israel discriminates against its Palestinian citizens on almost every level through well-established policies and practices. Think of Black people in the U.S. Would you say that asserting that they have the right to vote and enjoy “absolute” equality before the law is an accurate description of their situation? And there was even a Black president! But you do know (I hope) that Black Americans suffer from systemic, institutionalized, and chronic discrimination. Is this in itself apartheid? Let’s suppose it isn’t. But now imagine that the U.S. also had an occupied territory where millions of Black people lacking civil rights are under the yoke of white people in all respects, officially and legally. Well, are you beginning to catch a whiff of apartheid?

Rabbi Goldstein, you do not have to agree with me. But I ask of you two things: First, try to sum up for yourself what exactly is wrong with apartheid and then honestly ask yourself if it does not exist in the Israeli context? Second, take a deep breath before accusing someone of antisemitism, just because you do not like their criticism of Israeli policy. Millions were discriminated against, humiliated, tortured, murdered, and exterminated because of antisemitism. Do not make a mockery of this concept.