The “Battle of Cable Street” has become part of British lore as a stand against fascism, but its true history shows the country’s enduring legacy of white supremacy and colonialism. 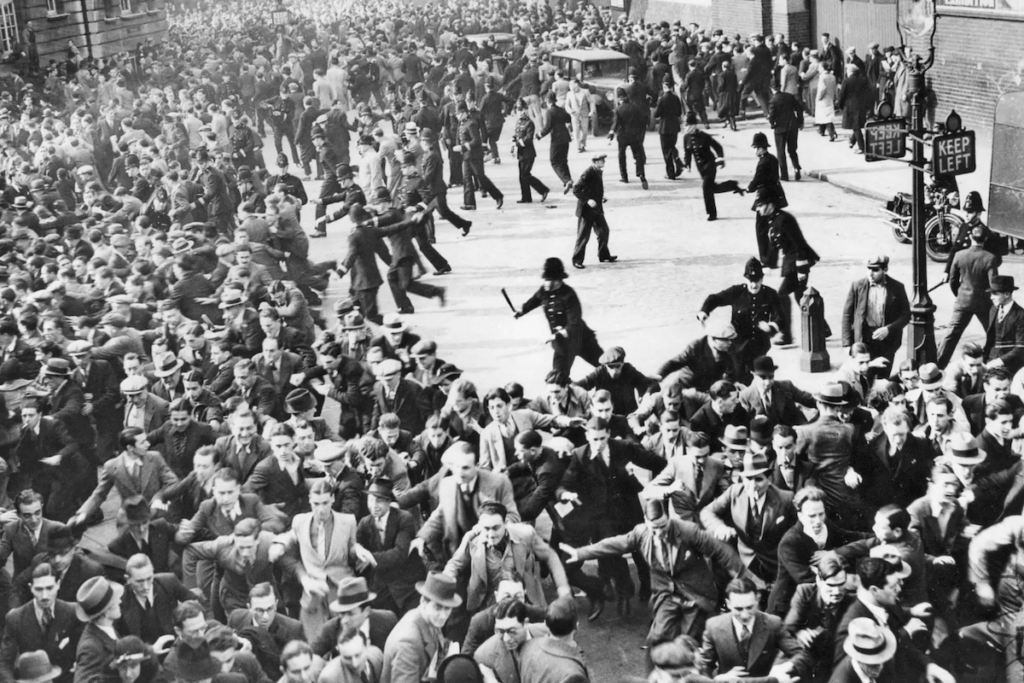 RIOTS ERUPTED BETWEEN ANTI-FASCISTS AND BLACKSHIRTS (BRITISH FASCISTS) WHEN MOSLEY’S SUPPORTERS WERE GATHERING IN GREAT MINT STREET FOR A MARCH THROUGH THE EAST END OF LONDON IN WHAT IS NOW CALLED THE BATTLE OF CABLE STREET ON OCT. 4, 1936. ULLSTEIN BILD VIA GETTY IMAGES

Monday, October 4 marked the 85th anniversary of the Battle of Cable Street. On Sunday October 4, 1936, thousands of members of the British Union of Fascists led by Oswald Moseley organized a march through London’s East End with the intent to commit horrific violence towards London’s Jewish community, which at that time predominantly lived in that area. However, the Jewish community knew an attack might be coming, so the Jewish People’s Council against Fascism and Antisemitism organized a demonstration with Irish dockworkers, socialists, trade unionists, and communists to fight against the fascist attack.

As the fascists ascended to Cable Street they were also guided by thousands of police officers, who were more than eager to protect them against those the state considered less than desirable. However, they were hit by a roadblock when they were met by the 20,000 strong anti fascist contingency who fought back against the fascist force with anything they could get their hands on, they eventually succeeded in getting Moseley to call his utterly demoralized Blackshirts to retreat. For one day the Jewish community of London could rest, knowing they and their fellow antifascists were able to defeat the fascists and protect the East End from a pogrom.

This memory of Cable Street has remained in our memory because it serves as a reminder of the narrative Britain has served to establish itself during WWII, a plucky force of people who through resiliency stood together to defeat fascism.

The reality however, is far more disturbing.

Because the Battle of Cable Street was just a battle, and the fascists did not suddenly go away. In fact, they had only grown stronger, they had recruited over 2,000 new members. On October 10th, as antifascist demonstrators were marching and celebrating their victory they were greeted by a mass of people “gesturing and screaming “the Yids, the Yids, we’ve got to get rid of the Yids”. At the corner of Bethnal Green and Roman Road, a double wall of police held back hundreds of young men and women shouting, “up the fascism, dirty Yids”.

As the fascists were violently clashing with the protesters, this was only  meant to serve as a deterrent to the real attack. The rest of the Blackshirts stormed into the East End and attacked Jewish shops and businesses with anything they could get their hands on. Jews were physically thrown out of the windows of their shops, and cars were set ablaze. This became known as the Mile End Pogrom. It was a scene that would not have been out of place in Nazi Germany. One shopkeeper voiced the community’s fears when he said, “I fear this is only the beginning.” For as Hitler’s bombs poured down on London, the Jews of the East End soon faced a new threat in the malice of Winston Churchill.

While not as genocidal as his views towards colonized people, particularly in Africa and Southeast Asia, Winston Churchill held deeply antisemitic views which were exacerbated by his longtime support for the Zionist colonial project. As Home Secretary in 1911, Churchill was present at the Battle of Stepney, an armed confrontation between police and Lativan revolutionaries, these revolutionaries were rumored to be Jewish and this influenced Churchill to strengthen the Aliens Act, which would have severely further restricted Jewish refugees from entering the UK.

The Aliens Act of 1905 was one of the first acts restricting immigration in the UK and it was primarily advocated by the PM at the time Arthur Balfour as an attempt to institute restrictions on Jewish refugees fleeing pogroms in the Russian Empire. Balfour was a notorious antisemite, who later would issue the Balfour Declaration, expressing support for a Jewish state in Palestine. This contradiction was not lost on Britain’s Jews at the time who saw Zionism as a clear attempt to get rid of all Jews on the European continent. For Balfour especially, it also served as a way to propagate his Christian end times theorist desires. It was particularly evident from the very start that Zionism required the support of antisemites for the establishment of their settler colonial state.

Churchill himself was an ardent Zionist throughout his life, and his term as Home Secretary was not the only time he expressed antisemitic views. He openly propagated Judeo-Bolshevik conspiracy theories, and in 1920 he claimed that ​​”international Jews” were leading a “world-wide conspiracy for the overthrow of civilisation”. Additionally, in 1937 he wrote a paper criticizing the “aloofness” and “separation” of Jews from wider society, and claimed they were “partly responsible for the antagonism for which they suffer.”

This culminated when during the London Blitz of 1940-1941, as German bombs were raining down on London, Churchill intentionally left the East End to fend for themselves. Because the East End was predominantly filled with Jews and other immigrants, there was less of a priority to provide them with adequate shelters. In fact, these were the areas which did end up with too few shelters, as after six weeks of bombing a quarter of a million people in the East End had lost their homes and were without shelter. They were forced to resort to using tube stations for shelter, for which 100-150,000 used on any given night.

The Jewish community of England continued to be terrorized by fascists for years after Cable Street and again by another significant resurgence of Nazism during the 1960’s with Colin Jordan’s National Socialist Movement.

While Nazism and antisemitism has never truly died out in London– just as with the rest of Europe, England is inherently built on antisemitism and the persecution of Jews. Still white Jews were able to eventually assimilate into further benefiting from a white supremacist system, especially as more grew to adopt colonialist Zionist views. As the Windrush Generation and other immigrants of color from the former British Empire immigrated to England, they became a more visible target within a country structurally built on white supremacy and colonialism.

Less than a mile away from Cable Street lies the Altab Ali Park, named in memory of Altab Ali, a Bangladeshi textile worker who was brutally stabbed to death in 1978 by white supremacists, a stark reminder that fascism did not die with Cable Street.