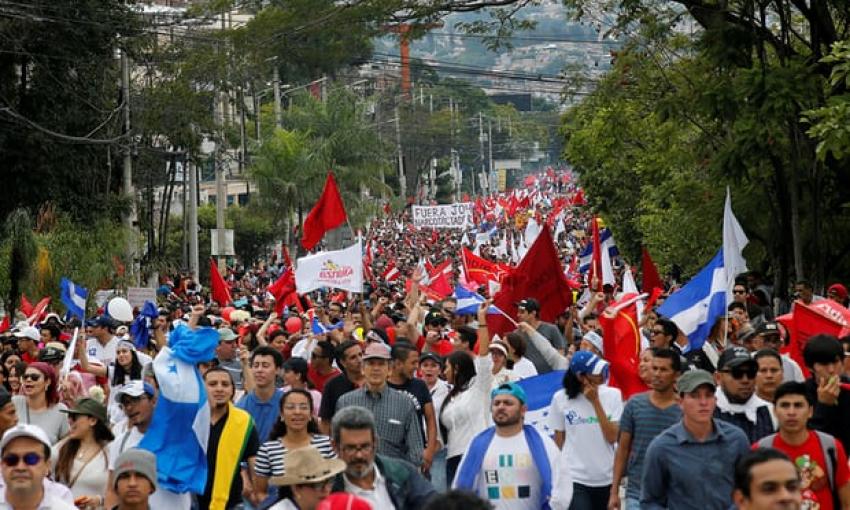 Major demonstrations have swept through Honduras following a thinly-veiled power grab by the U.S.-backed regime in the November 26 Presidential elections. Salvador Nasralla, the candidate of the progressive Opposition Alliance Against the Dictatorship, was initially reported to have an “irreversible” lead over incumbent President and U.S. lackey Juan Orlando Hernández. Following these reports, the Supreme Electoral Tribunal (TSE), a body that even the New York Times admits is “controlled by Mr. Hernández’s allies,” stopped disclosing results, returning over a day later to incredulously announce Hernández was in the lead and on the path to victory.

Only a few years prior, Hernández’s re-election campaign would have been deemed illegal. A constitutional ban on the Honduran President serving longer than one term has been revoked through the efforts of Hernández and his allies. This step towards consolidating power was especially sinister considering that the 2009 military coup against progressive leader and former President Manuel Zelaya was falsely portrayed by the Honduran right-wing and U.S. government as being some sort of anti-authoritarian maneuver.

In fact, Zelaya was detained and removed by the military on the very same day that a million-strong petition campaign in the country had led him to schedule a non-binding referendum on the question of creating a constituent assembly.

The convocation of a constituent assembly has been a common strategy for left-wing forces in Latin America. For instance, in Venezuela the constituent assembly process, first employed in 1999 and now underway again following the July 30 election this year, reveals the potential of such a mechanism for progressive and even revolutionary changes to the political, social and economic order.

Anti-imperialist actions taken by Zelaya during his tenure placed Honduras squarely in the crosshairs of the United States for regime change. Zelaya challenged the presence of U.S. military bases, while entering Honduras into PetroCaribe, a Venezuelan-sponsored organization providing subsidized oil, along with the Bolivarian Alternative of the Americas (ALBA), which was initiated by Venezuela and Cuba.

As previously reported in Liberation, “On August 26, 2008, Zelaya announced that Honduras would be joining ALBA to help the country overcome the decades of underdevelopment and poverty created by the neo-liberal policies of his predecessors. From the outset, ALBA members Bolivia, Nicaragua, Dominica, Venezuela and Cuba worked with Zelaya’s government to install Cuban health care workers, Venezuelan petroleum technicians, Bolivian and Cuban literacy campaigns, as well as to work on land reforms to increase agricultural production and exports.”

Since the ousting of Zelaya from the Presidency in 2009, nearly $114 million dollars has been spent by the United States to equip the Honduran state’s repressive forces, mainly under the pretext of the “war on drugs”.

Beginning under the U.S. administration of key coup backers Barack Obama and then Secretary of State Hillary Clinton, so-called democracy promotion and counter-terrorism efforts in Honduras have left the country as one of the most dangerous places in the world for journalists, activists and organizers, while large amounts of drugs continue to be trafficked.

No Limit to U.S. hypocrisy on “Human Rights” rhetoric

Just two days after the November 26 election, Reuters reported that, “The U.S. State Department has certified that the Honduran government has been fighting corruption and supporting human rights, clearing the way for Honduras to receive millions of dollars in U.S. aid.”

Hernández has already met with the Trump/Pence administration this year, and is fondly referred to by White House Chief of Staff John Kelly as a “good friend.” Kelly is a former General, who at one time led the U.S. military’s Southern Command (SOUTHCOM); the unit responsible for maintaining U.S. imperial dominance in Central and South America.

The first term of Hernández saw the looting of public coffers by the right-wing National Party to rig the 2013 elections in his favor, the high-profile assassination of indigenous and environmentalist activist Berta Cáceres, privatization and anti-worker measures, and ongoing police/military repression.

The willingness of Hernández to stand in as a proxy for U.S. imperialism in the region makes him a prized ally. Historically, Honduras has been used as a launching point for U.S. counter-insurgency operations against the progressive rule of Jacobo Arbenz in Guatemala, the revolutionary forces of the Sandinistas in Nicaragua and the FMLN in El Salvador, and as a training
ground for the formation of fascist death squads by the CIA.

Fed up with worsening conditions of poverty and repression since the coup in 2009 and clearly recognizing the election to be fraudulent, a massive outpouring of Hondurans have taken the streets day and night.

Coming into the first weekend of protests, a ten-day curfew order was imposed to be enforced nightly between 6:00 p.m. to 6:00 a.m. Despite several deaths and many hundreds injured, the persistence and refusal of the people to back down has resulted in a number of police ignoring orders to repress demonstrations and make demands upon the government to solve the crisis through “peaceful” means, splitting the ranks of the governments’ repressive forces.

The main force of the Opposition Alliance is the left-wign LIBRE (Freedom and Refoundation) Party, led by Zelaya, and it has been among the main forces organizing anti-fraud demonstrations along with a broad coalition of social movements. These protests represent a continuation of the mass movement following his 2009 coup. Realizing the initial demands for free and fair elections and for Juan Orlando Hernández to get out (Fuera JOH!) are crucial steps for the people of Honduras to claim power over their country.