Report on a Wave Outside the Sea 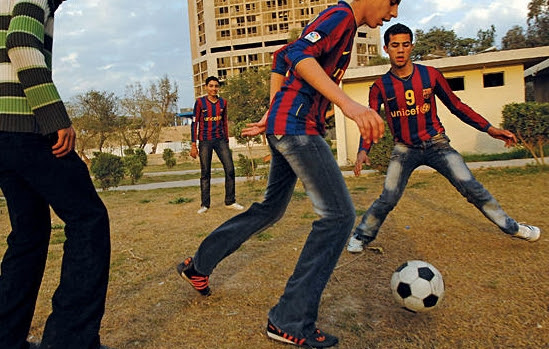 Cafés across the Arab world resound with the excitable commentary from the World Cup matches. Flags of the main football nations fly from lampposts, and murals of the main players adorn billboards. Brazil is a great favorite, but so is Germany. In the byways of Iraq’s streets, little boys would often play football – younger versions of Ammo Baba, the first Iraqi to score an international goal against Morocco in 1957. Iraq was never a contender at the top level, but in the Gulf Cup it was a frequent victor. From 1984 to 2003, Saddam Hussein turned over his country’s football federation to his son Uday, a singularly cruel man. Uday Hussein fancied himself as the cultural tsar of Iraq, in control of football and the country’s main FM radio station – Voice of Iraq. He insisted that the station play dance music (much of Euro-vision style swill), which he would supplement in his many homes with the sound of machine-gun fire.

Iraq’s artists feared Uday’s whimsy. One of Ustav Uday’s minions told Patrick and Andrew Cockburn what is was like to go to a nightclub with the man who ran Iraqi football, “Uday lined up a group of male gypsy singers ontstage, told them to drop their trousers and sing while he fired his submachine gun just over their heads. After ten minutes, some began to urinate with fear. Then he told them all to get dressed, gave them some money, and told them to go home.” They were lucky.

With the fall of the Ba’ath regime in 2003, Iraqi football picked up just enough steam to coast to a historic victory in the 2007 Asia Cup. The team defeated Saudi Arabia. It was the high-point of Iraqi football. Nothing like it has happened ever since. Iraq lost its qualifier for the 2014 World Cup against Chile 6-0. That same month, according to the UN Assistance Mission for Iraq (UNAMI), violence across Iraq cost the lives of 804 people and wounded 2030 people. The previous month, in July 2014, over a thousand people died – the bloodiest month since the worst fighting of 2006-07. UNAMI’s Nikolay Mladenov had an unenviable job – each month his agency would release casualty figures, and it was likely that he’d have to make a statement about how this was the worst month since 2007. The Asia Cup win was a small bright spark in a long and dangerous decade. One imagines that George W. Bush paints dogs and his toes to forget his nightmares over the death toll in Iraq. There are no complete figures.

The Islamic State of Iraq and al-Sham (ISIS) and its allies continue to hold Mosul. Electricity in the town is down. Diesel generators splutter, but cannot be expected to hold out. What power is there is used to motor the refrigeration units, preserving food against the hot weather. The World Cup is down the list of the residents’ priorities. They worry about the basics – a way to keep alive, to keep cool, to drink water, to eat food. ISIS set out its rules against smoking and drinking, regular prayer and dress codes for women. The Iraqis of Mosul, like the Syrians of Raqqa, are not naturally disposed to such cultural norms. ISIS is busy fighting for the oil refinery at Baiji, and to take Samarra, the city of their leader, Abu Bakr al-Baghdadi. It will not forget its promises, as it did not in Raqqa. Lesser fighters will stay behind the lines. They have not seen death as the frontline soldiers. Their sadism will be confined to the torture of those who do not listen to their edicts. They will mimic the US prison guards at Abu Ghraib – their valor is earned against the helpless.

Football gets a bad rap amongst the salafi preachers, despite the fact that Saudi Arabia has a vibrant culture of football and a successful world-class football team (no berth for Brazil though). One of Egypt’s leading salafi preachers, Abdel Moneim El Shahat, spokesperson of al-Da’wa al-Salafiya, said in 2012 that only three sports are permitted by his view of Islam – horseback riding and javelin, both arts of war; and swimming. But no football.  El Shahat’s leader, Yasser Borhami, complained that football distracts people from their religious duties and leads to the “destruction of nations and peoples.”

On the riverbank of the Euphrates, ISIS fighters pause. They plant their standard. Swimming is permitted to them. They likely went for a dip to cool off. The temperature in Mosul was 40 degrees centigrade. It is like an oven.

Uday Hussein was married briefly to the daughter of his father’s closest associate, Izzat Ibrahim al-Duri (the King of Clubs in the US deck). Al-Duri evaded capture after 2003, surfacing here and there over the course of the decade but always for a moment. A tape released in 2012 showed him in his Ba’ath regalia, the uniform and dark glasses, fulminating against the government in Baghdad. Al-Duri was not only no. 2 to Saddam Hussein, but also leader of the al-Duri tribe and benefactor of his hometown of ad Dawr. In Diyala province, a small insurgent group took up arms against the US – the Army of the Men of the Order of Naqshbandi (JRTN). The JRTN are Sufis, with al-Duri their leader. Sufism in this quarter does not share the heterodoxy that one used to see amongst Sufis of Syria and of course in South Asia – the passions of men inflamed to experience the passion of God. JRTN members do not sing as they swing – they are more disposed to gunfire, born as their group was after Saddam Hussein had been captured in December 2006. This Naqshbandi army is marked not by secular Ba’athism but by a strange mutation of Islamic Ba’athism. Intense hatred of al-Maliki’s government in Baghdad holds together their alliance with the ISIS, the senior partner in the battlefield.

The hot desert winds of counter-revolution blew from Saudi Arabia to drag the Arab Spring away from its moment of hope. Bahrain was the first blow, and then Saudi attentions spread across North Africa and into the Levant. Qatari ambitions for the Muslim Brotherhood played their part in knocking off enemies of the House of Saud, but then they had to be dampened. Qatar, the Gulf’s junior player, had to be put in its place. Its principle vehicle – the Muslim Brotherhood – preached a form of Islam that is anathema to the Wahhābiyyah of the Saudis. Saudi money and local Salafis backed Egypt’s Sisi as the Saudi tentacles throttled the Syrian opposition’s many platforms (their Shummar clansman, Ahmad Jabra, was sent to take over the Syrian National Coalition, and their al-Zoubi clansman, Bashar al-Zoubi, took charge of the Saudi-funded but inconsequential Southern Front). The Muslim Brotherhood has gone back to its familiar holes, the liberals took refuge behind the military, and the people…..well. Petro-dollars petrified the Arab Spring.

Incoherence from Saudi Arabia resulted not only from the contradictions of politics in Syria or Iraq, but also from the deep and important battles within the House of Saud. King Abdullah, ailing and near his end, has sidelined the powerful Sudairi Seven (the Nayefs, the Turkis, the Sultans and of course Bandar bin Sultan) to the advantage of his own lineage. The Sudairis have not taken this lying down. It is said in the Kingdom that they are pushing a hard line for support of the jihadis to corner King Abdallah’s regime into power plays that would benefit them. Start-ups like ISIS relied upon jihadi venture capital from the princes in their private capacity. Such money inflames the region and draws Saudi Arabia – despite official denials – into this or that intrigue that they cannot fully control. Blowback is something that the Saudis know a lot about, from the 1979 Al-Masjid al-Haram seizure in Mecca to the emergence of Osama Bin Laden’s network in the Kingdom. Not developments that they would welcome again.

Intelligence officials in the Arab world have long speculated that from 2003 al-Duri had taken refuge in Saudi Arabia. He is suspected of being one of the architects of the anti-US insurgency in the “Sunni Triangle,” a fashionable term that makes more sense in the Pentagon and in US think tanks than it does on the ground in Iraq. Al-Duri’s alliance with ISIS gives them the legitimacy of his Ba’athist pedigree in a region that benefitted from the Ba’ath state, and ISIS in turn gives al-Duri the seasoned fighters that he does not otherwise command. It is a unity of convenience, but also an alliance that advances the twisted goals of sections of the Saudi elite. No wonder that the State both said that they do not support ISIS but that they do not want the US to enter the conflict against them.

The United States has decided not to bomb ISIS positions, but it will send three hundred troops to help with the defense of Baghdad. The US destroyed the Iraqi Army with its bombing runs in 1991, the sanctions regime of the 1990s, the Shock and Awe campaign of 2003, the destruction of the army after 2003 and the prevention of any latitude for the new government to recreate a robust military force. No wonder that the Army simply has not the wherewithal to stand up to the advance of ISIS, not now, not in January in Ramadi and Fallujah. This was in the name of democracy promotion. In that name, the US foisted a Constitution on Iraq, based on which Nouri al-Maliki won two elections. Now, in the name of democracy promotion, the US has asked that he step down as a precondition for aerial strikes. This is an American habit – this or that leader, the US president likes to say, has to go. This is democracy by imperial fiat.

Iraq trembles for its future, as it has trembled over the past thirty-five years – since Saddam Hussein gleefully heeded the US call to attack Iran in 1980. The boot of imperialism has lain heavy on the neck of Iraq. One sees only the face of the man who has worn that boot (Saddam then, later al-Maliki) – not who has shaped the boot and delivered it to its local satrap.