End Israel’s Use of Chemical Weapons Against Civilians 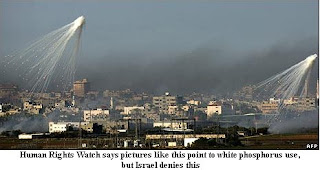 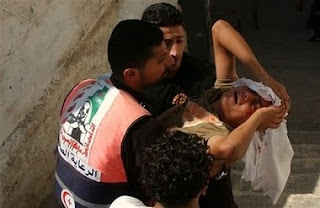 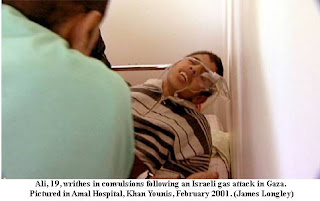 This is forwarded by that indefatiguable human rights campaigner, Dr Derek Summerfield.

Derek Summerfield waged a long war of attrition against the last president of the World Medical Association Yoram Blachar, who was also head of the Israeli Medical Association. In that capacity Blachar had dismissed all allegations of the use of torture by the Zionists as ‘arab propaganda’ and had become adept at turning a blind eye to the practice by the Israeli state of using doctors to help torture prisoners.We have had reports for some time that Israel used the bombardment and invasion of Gaza in order to try out new and horrific chemical weapons. It is a good example of the West’s gross hypocrisy that chemical weapons in the hands of Saddam Hussein were condemned but the use of chemical weapons by Israel and the USA are passed over in silence.
In the first Gulf War depleted uranium was used as anti-tank missiles and it is believed that much of the ‘gulf war syndrome’ stemmed from that and the medication given to counteract the effects of Iraqi chemical weapons that never were.
The examples given below are horrific but of course when it comes to Israel anything goes, because it is the US’s armed rottweiler in the Middle East.
Tony Greenstein
New weapons experimented in Gaza: population risks genetic mutations
Biopsies from 32 victims conducted at three universities: Rome (Italy), Chalmer (Sweden) and Beirut (Lebanon)

May 11th 2010
Toxic and carcinogenic metals, able to produce genetic mutations, have been found in the tissues of people wounded in Gaza during Israeli military operations of 2006 and 2009. The research has been carried out on biopsies from wounds provoked by weapons that do not leave fragments, a peculiarity of weapons utilized in Gaza that was pointed out repeatedly by doctors and that shows that weapons whose long term effects are still to be assessed were used.
The researchers compared the quantity in 32 elements present in the tissues through ICP/MS (a type of highly sensitive mass spectrometry) . The job, carried out by laboratories in the Universities La Sapienza of Rome (Italy), Chalmer (Sweden) and Beirut (Lebanon), was coordinated by New Weapons Research Group (Nwrg), an independent committee of scientists and experts based in Italy, who is studying the use of unconventional weapons and their mid-term effects on the population of after-war areas.
The relevant presence of toxic and carcinogenic metals founds in the wound tissues points to direct risks for survivors, but also to the possibility of environmental contamination.

Biopsies of tissues were performed by doctors of Shifa hospital, in Gaza city, who selected and classified the type of wounds. Research was conducted on 16 tissue samples belonging to 13 victims. 4 biopsies were taken in june 2006, during operation “Summer Rains”, while the others were taken in the first week of january 2009, during operation “Cast Lead”. All tissues were appropriately preserved and then examined by each of the three universities.

Tissues belong to four types of wound: amputation (marked with “A” in the study), charred (C), burns (B), multiple piercing wounds by white phosphorus (M). The following elements were found in quantities well beyond normal:
• Alluminium, titanium, copper, strontium, barium, cobalt, mercury, vanadium, cesium and tin in samples of A and C wounds;
• Alluminium, titanium, copper, strontium, barium, cobalt and mercury in M wounds;
• Cobalt, mercury, cesium and tin in B wounds;
• Lead and uranium in all wound types;
• Barium, arsenic, manganese, rubidium, cadmium, chromium and zinc in all, but M, wounds;
• Nickel in A wounds.
Some of these elements are carcinogenic (mercury, arsenic, cadmium, chromium, nickel and uranium), others are potentially carcinogenic (cobalt and vanadium), others are also fetotoxic (alluminium, mercury, copper, barium, lead and manganese).

The first ones can produce genetic mutations; the second ones can have the same effect on animals, but they are not proven to do the same on people; the third ones have toxic effects for people ad can affect either the embryo or the foetus in pregnant women. All metals found in amounts over the controls have pathogenic effects in human respiratory organs, kidney and skin and affect sexual and neurological development and functions.

The combination of metals in each type of wound is referred to as a “metal signature”, illustrated in the following image:
Legend
Columns represent elements, rows represent wound type
Red circles: very high amounts in all biopsies
Orange squares: very high amounts in some biopsies
Blue triangles: amounts similar to those found in normal derma
“Nobody – says professor Paola Manduca, spokesperson of the New Weapons Research Group, genetics teacher and researcher at the University of Genoa – had never conducted bioptic analysis on tissue samples from wounds.

We concentrate the attention on wounds made by weapons that do not leave fragments, as these were pointed out several times by the doctors in Gaza, and because weapons which do not leave fragments were developed in recent years. We wanted to verify if metals were present which remained in the wound skin and derma.

The use of metals in the weapons utilized in Gaza had been hypothesized, but never demonstrated before. To our surprise, beside finding the metal components of amputating weapons, even the burns provoked by white phosporus contain high amount of metals. Moreover, the presence of these metals in the weapons implies that they have been dispersed in the environment, in unknown amounts and range.; they have been inhaled by the victim and by bystanders, thus constituting a risk for survivors and for people that were not directly hit by the bombing.”

This research was preceded by two other studies conducted by Nwrg. The former was published on December 17th 2009 and reported the presence of toxic metals in areas of craters provoked by the Israeli bombing on the Gaza Strip.

The second was published on March 17th 2010 and reported the presence of toxic metals in hair samples of Palestinian children of Gaza Strip area hit by Israeli bombings. Both point to the presence of environmental contamination, aggravated by the living conditions on the ground and often in shelters exposed to wind and dust, due to the impossibility to rebuild housing imposed by the Israeli blockade to the entrance of needed building materials and tools.