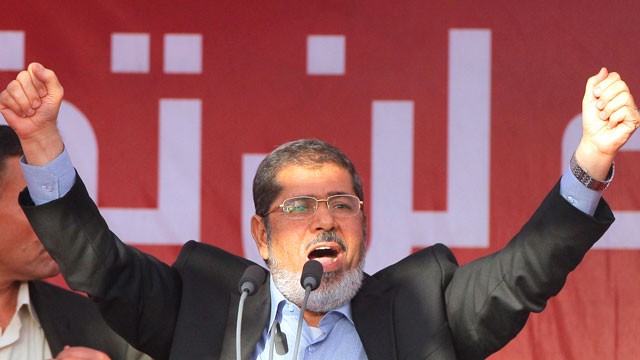 Egypt’s president-elect has vowed to win the release of an Egyptian cleric jailed by the U.S. for planning the first attack on New York’s World Trade Center.

Omar Abdel-Rahman, “the blind sheikh,” is serving a life sentence in a federal prison for his role in the 1993 bombing that killed six people in lower Manhattan. The attack on the World Trade Center launched by al Qaeda eight years later on Sept. 11, 2001, killed nearly 3,000 people.
“”I see banners for Omar Abdel Rahman’s family, and for prisoners arrested according to martial rulings and detainees from the beginning of the revolution,” said Egyptian president-elect Mohammed Morsi to a buoyant crowd of Islamist supporters in Cairo’s Tahrir Square on Friday. “It is my duty to make every effort, and I will beginning tomorrow, to secure their release, among them Omar Abdel Rahman.”
Rahman, 74, a veteran of Egypt’s Islamist movement, was jailed in Egypt for allegedly helping to inspire the assassination of President Anwar Sadat. He entered the U.S. in 1990. One of his followers was convicted of gun possession, though acquitted of murder, after the assassination of Zio-Nazi leader Rabbi Meir Kahane in New York in 1990.
Using evidence collected by an Egyptian informant, the U.S. government prosecuted Rahman for conspiracy in connection with the February 1993 World Trade Center attack. After the attack, the government recorded Rahman encouraging further violence against targets in New York and New Jersey. Rahman and nine followers were arrested in June 1993, and he was sentenced to life in prison in 1996. He is presently incarcerated at the Butner federal facility in North Carolina, where Ponzi schemer Bernie Madoff, also 74, is serving his own effective life sentence.
In 2005, lawyer Lynne Stewart was convicted of serving as a messenger between Rahman and Islamists in Egypt. She was sentenced to 28 months in federal prison, and then resentenced to 10 years in prison in 2010 because of alleged perjury.