US State Department Boasted in 2017, with Appointment of FM Chrystia Freeland

By: Ben Norton
The Grayzone 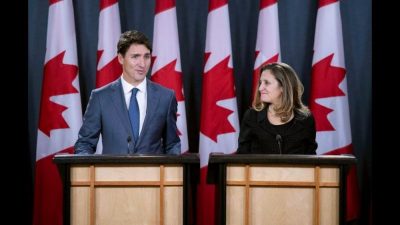 The US embassy in Ottawa boasted in a March 2017 memo, “Canada Adopts ‘America First’ Foreign Policy,” just after PM Trudeau appointed hard-line hawk Chrystia Freeland as foreign minister.
***
The US State Department boasted in a declassified memo in March 2017 that Canada had adopted an “America first” foreign policy.
The cable was authored just weeks after the centrist government of Prime Minister Justin Trudeauappointed Chrystia Freeland as foreign minister. The former editor of the major international news agency Reuters, Freeland has pushed for aggressive policies against states targeted by Washington for regime change, including Venezuela, Russia, Nicaragua, Syria, and Iran.
The State Department added that Trudeau had promoted Freeland “in large part because of her strong U.S. contacts,” and that her “number one priority” was working closely with Washington.
Under Freeland, the granddaughter of a Ukrainian Nazi propagandist, Canada has strongly campaigned against Russia, strengthened its ties with Saudi Arabia and Israel, and played a key role in the US-led right-wing coup attempt in Venezuela.
The memo offers the most concrete evidence to date that the United States sees Ottawa as an imperial subject and considers Canadian foreign policy as subordinate to its own.
Canada ‘Prioritizing U.S. Relations, ASAP’
On March 6, 2017, the US embassy in Canada’s capital of Ottawa sent a routine dispatch to Washington entitled “Canada Adopts ‘America First’ Foreign Policy.”
Almost all of the now declassified document is redacted. But it includes several pieces of revealing information.
The cable notes that the Canadian government would be “Prioritizing U.S. Relations, ASAP.” It also says to “Expect lncreased Engagement.”

The only section that is not redacted notes that the Trudeau administration “upgraded Canada’s approach to the bilateral relationship.”

“PM Trudeau promoted former Minister of International Trade Chrystia Freeland to Foreign Minister in large part because of her strong U.S. contacts, many developed before she entered politics,” the cable says.
“Her mandate letter from the PM listed her number one priority as maintaining ‘constructive relations’ with the United States,” the memo continues.
“Trudeau then added to her responsibilities for U.S. affairs, giving her responsibility for U.S.-Canada trade, an unprecedented move in the Canadian context,” the State Department wrote.

Chrystia Freeland’s ‘key role’ in Venezuela coup attempt
Foreign Minister Freeland has worked closely with the US government to advance its belligerent policies, especially those that target independent and leftist governments that refuse to submit to Washington’s diktat.
Under Freeland’s leadership, Canada took the lead in the plot to destabilize Venezuela this January. The Associated Press reported on how Ottawa joined Washington and right-wing Latin American governments in carefully planning the putsch.
Two weeks before coup leader Juan Guaidó declared himself “interim president,” Freeland personally called him to “congratulate him on unifying opposition forces in Venezuela.”
The AP reported:

“Playing a key role behind the scenes was Lima Group member Canada, whose Foreign Minister Chrystia Freeland spoke to Guaido the night before Maduro’s searing-in ceremony to offer her government’s support should he confront the socialist leader.”

In 2017, Freeland helped to establish the Lima Group, an alliance of Canada and right-wing governments in Latin America that coalesced to push regime change in Venezuela. Because the US is not a member, Freeland has ensured that the Lima Group will act in Washington’s interests and advance North American imperial power in the region.

Canada’s former ambassador to Venezuela, Ben Rowswell, criticized the coup-plotting to the newspaper The Globe and Mail.

“It’s an unusual move for any country to comment on who the president of another country should be,” he said, “to have countries that represent two-thirds of the population of Latin America do it in minutes shows there was a remarkable alignment that’s got to be nearly unprecedented in the history of Latin America.”

Trudeau and Freeland have repeatedly called for the overthrow of the elected Venezuelan President Nicolás Maduro.
Canadian mining corporations, which are already heavily exploiting Honduras, have been desperate to get access to Venezuela’s substantial mineral reserves.
A Canadian hawk
Chrystia Freeland strongly supports sanctions against Western enemies and is a vocal advocate of unilaterally seizing the assets of foreign leaders deemed by Washington to be “dictators.”
She has pushed this “America first” foreign policy especially hard in Latin America and the Middle East.
In addition to imposing brutal sanctions on Venezuela, helping the US maintain a crippling economic blockade of the country, the Trudeau government has also sanctioned Nicaragua, whose democratically elected socialist government survived a violent right-wing onslaught in 2018. Freeland has echoed the Trump administration’s harsh rhetoric against Nicaragua’s Sandinista government.
Canada has also followed the US in expanding the economic attack against Syria, part of a renewed effort to destabilize the government of Bashar al-Assad. Weeks after Freeland was promoted, Ottawa pushed through a new round of sanctions against Damascus.
Freeland has also joined Washington in its campaign to suffocate Iran. The Canadian foreign minister has refused to re-establish diplomatic ties with Tehran.
At the same time, Freeland strengthened ties with the far-right government of Benjamin Netanyahu, pledging Canada’s “ironclad” support for Israel.
Nazi propagandist’s granddaughter
In Canada, Chrystia Freeland is perhaps best known for her anti-Russia campaigning. She has expressed her country’s “unwavering” support for Ukraine and boasted that she is “ready to impose costs on Russia.” The Trudeau administration has imposed several rounds of harsh sanctions on Russia.
While she has staunchly supported Ukraine, Freeland obscured the fact that she was the granddaughter of a fascist Ukrainian Nazi collaborator who edited a propaganda newspaper that was founded and overseen by Nazi Germany. Shockingly, the paper was founded after the Nazi regime stole the publication’s presses and offices from a Jewish publisher, whom it then killed in a death camp.
Freeland knew about her grandfather’s Nazi collaboration, but tried to hide this embarrassing fact by falsely branding it as “Russian disinformation.” The Canadian government even went so far as to expel a Russian diplomat who dared to publicize the truth about her Nazi lineage.
From the heights of journalism to electoral politics
Before entering formal politics as a member of Canada’s centrist Liberal Party in 2013, Chrystia Freeland spent decades in journalism. She worked for major American, British, and Canadian corporate media outlets.
After years shaping Western news coverage inside Ukraine and Russia, Freeland was promoted in 2010 to her highest position of all: global editor-at-large of Reuters, a major international news agency that has vast global influence.
Freeland cut her teeth doing anti-Russia reporting for the corporate press. She won awards for her puff pieces on the anti-Putin oligarch Mikhail Khodorkovsky.
In 2000, Freeland published a book, titled “Sale of the Century: The Inside Story of the Second Russian Revolution.” The book’s blurb notes that it documents “the country’s dramatic, wrenching transition from communist central planning to a market economy,” praising “Russia’s capitalist revolution.”
This was after Russia was looted by oligarchs empowered by Washington, and following the excess deaths of 3 to 5 million of its most vulnerable citizens due to the US-orchestrated demolition of the country’s social welfare state.
More pro-US operatives in Canada’s Trudeau government
The declassified State Department cable also touts several other appointees in the government of Prime Minister Justin Trudeau as key US proxies.
The Canadian government selected a retired lieutenant general, Andrew Leslie, who the memo notes “has extensive ties to U.S. military leaders from his tours in Afghanistan,” as a parliamentary secretary at Global Affairs Canada, giving him “responsibility for relations with the United States.”

The Trudeau government took what the State Department happily noted was an “unprecedented” decision to hold weekly meetings of the Canada-US Cabinet Committee, “even without a formal agenda, as ministers engage in freewheeling discussions of strategy and share information, in addition to making policy decisions.”
Prime Minister Trudeau campaigned on a progressive platform, but has continued governing Canada with many of the same center-right, neoliberal policies of previous administrations. He has almost without exception followed the US lead on major foreign-policy decisions, while aggressively building fossil-fuel pipelines at home.
Because Trudeau is from Canada’s centrist Liberal Party and has to maintain a veneer of resistance against the far-right US president, the State Department memo notes that Ottawa’s former Conservative Prime Minister Brian Mulroney serves as “Trudeau’s ‘Trump Whisperer.’”
Totally ignored by media
This US State Department cable was first uncovered and publicized by the Communist Party of Canadaon July 2.
The memo, which was drafted by Nathan Doyel, a political officer at the embassy at the time, was declassified and published on May 31, 2019, in response to a Freedom of Information Act (FOIA) request.
It can be clearly seen on the US State Department website, with the subject line “CANADA ADOPTS ‘AMERICA FIRST’ FOREIGN POLICY.”

No media outlets have reported on this cable. Indeed, its discovery has been entirely ignored by the North American press corps.
Commenting on the document, the Canadian communist party wrote on social media,

“In light of repeated insistence by the federal government that Canadians can expect foreign interference in elections and institutions, does such a memo merit further investigation by the Canadian media?”