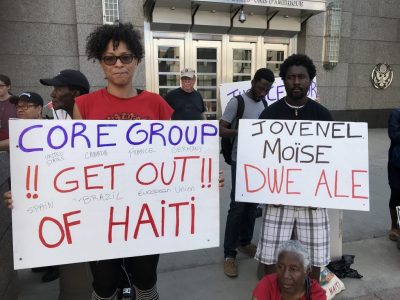 This year, an unprecedented event took place on Canada Day, in Ottawa. A group of Canadians answered a fellow citizen’s challenge to host the first ever “Make Canada Better – Speaker’s Corner”. The challenge went up on Facebook and Twitter, on June 16, 2019. It called for speakers to come to Ottawa on July 1st and “tell the truth about Apartheid in 2019 foreign-occupied Haiti”. It, in fact, listed three specific rendez-vous:
.

As I explained to dozens of participants and curious listeners, who walked past the U.S. Embassy, on Sussex Drive, this Monday July 1, 2019, inspiration for these events came from a dear friend, the late Dr. Patrick Élie. The Biochemistry Professor, who passed away in February 2016, once went on a cross-Canada tour during which he spoke passionately about the urgent need for a radical change in Canadian policy towards Haiti.
Dr. Élie, who once served in the government of democratically-elected Haitian President Jean-Bertrand Aristide, was often asked by attendees of his lectures: “what should well-meaning Canadians do to help Haiti?“. Invariably, he answered: “be a good citizen of your own country“.
Indeed, anyone who would have attended Patrick Élie’s lectures or who watched one of the well-researched documentaries about recent Haitian history, would quickly grasp the profound message conveyed in that sentence. A good Canadian citizen is one who exercises rights and fulfills duties that help make Canada a force for good in the world.
For nearly two decades now, a group of Canadians have tried to stir Canadian policy towards Haiti in a better direction. Unfortunately, the objective facts point to no major success thus far.
As illustrated by Canadian-French and American flags-adorned wooden crosses they trail on bent backs at multiple street demonstrations, impoverished Haitians consistently denounce Canada, the U.S. and France for the primary role they say these countries are playing in supporting a Neo-Tonton Macoute regime in Haiti. 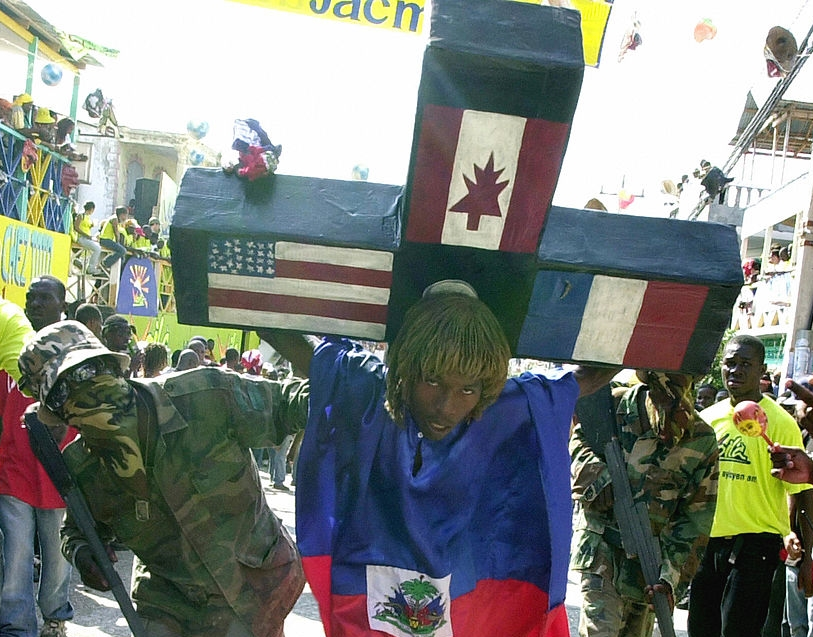 Various researchers have documented disturbing evidence that Europe-U.S-Canada continue to nurture an unofficial system of political, social and economic Apartheid in the U.N./U.S.-occupied nation of Haiti.
Similarly to the 1915-1934 occupation of Haiti by the U.S., most natives reject today’s fraudulently and violently-imposed “presidents”, “senators”, “ministers” who are seen as mere black-face-white-mask puppets of the Core Group of foreigners (mostly white) who hold effective control of the 27,750 Square Kilometers known as the Republic of Haiti. This is also consistent with the decisions reached at the scandalous January 31, 2003 Ottawa Initiative on Haiti Coup planning meeting.

The “Ottawa Initiative on Haiti”: Humanist Peacekeeping or…?

So, what was the point of repeating a message that has been systematically ignored by Canadian foreign policy makers, since the February 29, 2004 coup?
The topic is, of course, close to heart as I am an African, a native of Haiti, a Canadian and a citizen of Planet Earth who aspires to a better world. The 30000 Haitian victims of cholera contagion (brought to the island by the illegally-deployed U.N. troops), are family. The millions who are merely surviving on the island under the foreign-imposed neo-Tonton Macoute regime are deserving of our genuine solidarity.
In the African-Canadian community, there is much disdain for the term “visible minority” which was rendered fashionable by (mostly white) decision makers. It is fair to say that, after decades of speeches, its use has not helped increase the presence of non-whites in the spheres of power in Canada, to any significant degree. Likewise, the omnipresent huge cross adorned by the Canadian flag that Haitian demonstrators carry has, so far, somehow, failed to attract the curiosity of Canadian mainstream journalists. Some uncomfortable realities seem to have the surprising property of becoming invisible in plain sight.
Nonetheless, this past Monday July 1, 2019, Jo, a Raging Granny who joined previous Canada Haiti Action Networkevents in 2004-2006, was present with us, in front of the U.S. Embassy to answer the challenge. So was Mimi, an elegant grey-haired musician who speaks fondly of her native Petit-Goave, where she would have spent her old days, were it not for the Neo-Tonton Macoute regime that our taxes are propping up in Haiti.
Two vans arrived from Montreal with peace and anti-imperialism activists, including Frantz André, Jenny-Laure Sully, Marie Dimanche, friends from the Algonguin Anishinabe Nation and many more comrades of various background and experiences.
Did we successfully, magically, make Canada better with our speeches, with the flyers we distributed about the embezzled Petro Caribe funds, with information on the ongoing crimes like the Massacre of La Saline, or on journalist Pétion Rospide who the regime assassinated on June 10, 2019? 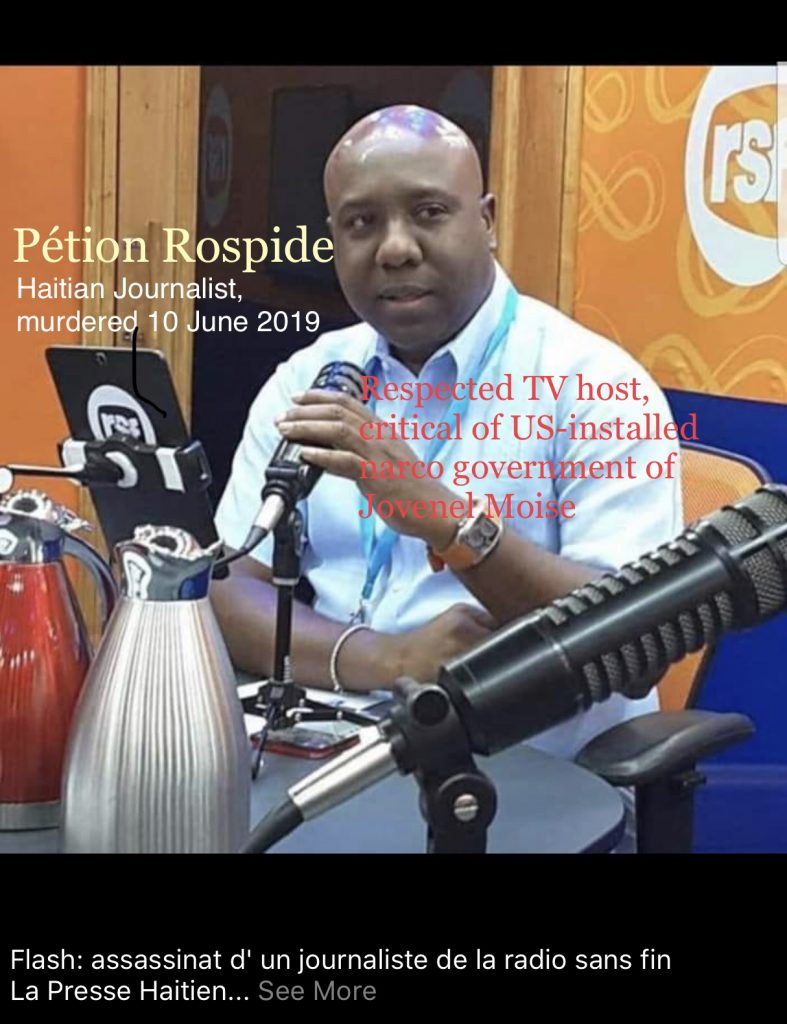 Will Federal Party Leaders answer our call for a principled stand on Haiti, ahead of the October elections?
Will CBC reporters decide to finally elucidate the reason young Haitians carry that cross which shames us all, on their backs? 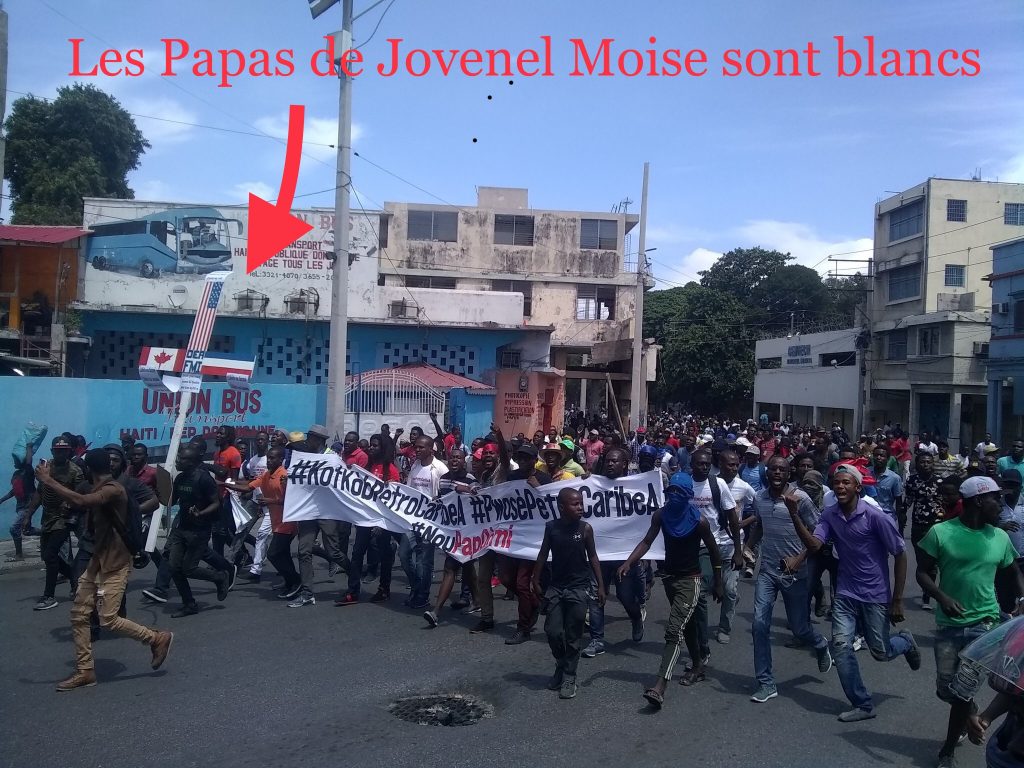 I am unable to answer these questions with any degree of confidence. However, I feel honoured to have stood by the wretched of the earth alongside Darlène, Kevin, Simone, Turenne, Raymond, Mimi, Jo, Marie, Jean-Claude, Frantz, Jenny-Laure, Pierre as well as dozens of old or new comrades, on this July 1st afternoon. Brother Patrick, we tried to be the best Canadian citizens that we could be.
Tomorrow is July 4th. I have been told that, if not in Washington, in New-York, our KOMOKODA comrades will carry the challenge to tell the truth about Haiti, as they have been doing every Thursday – for several years now. Your beloved brother, the tireless Dahoud André is at the front. Do rest in peace comrade Patrick! 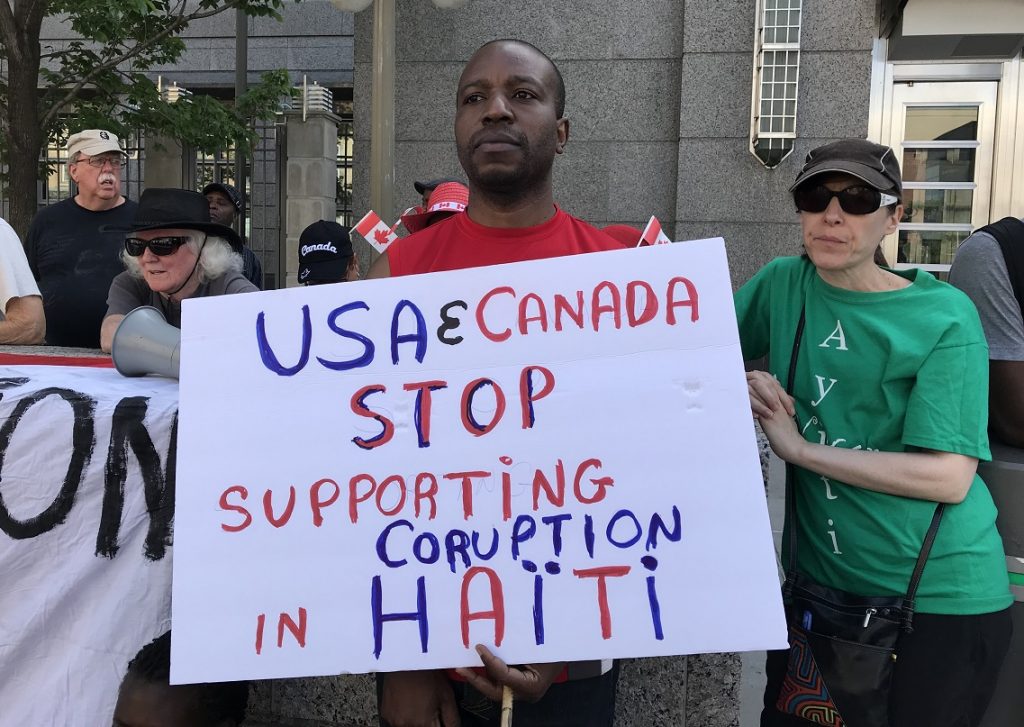