Dozens of Georgians likely Killed by US toxin or Bioweapon disguised as Drug Research – Russian MoD
… from Russia Today, Moscow
[ Editor’s Note: It has taken a while for VT’s reporting about Senator Lugar Laboratory’s illegal bioweapons human testing to get into the mainstream news. Moscow has known about the laboratory for years because it monitors VT, but it chose to keep any response low key.
That seems to have changed now with its statement to consider a military reaction among its options – something rarely said by the Russians; plus the statement comes from a high official.
It also shows the rest of the world that the incidence of 79 people murdered in population testing can be kept quiet due to no international oversight of these labs – something that needs to be fixed, as this kind of covert research is a major security threat to us all.
And by that I mean that independent monitors have to be in all of these labs as permanent staff to verify in real time that the laboratory experiments are in compliance with international law and regulations.
Am I unhappy that VT did not even get a mention here, when Moscow has monitored our Lugar Laboratory reporting for years, primarily due to our Seth Ferris articles from NEO? Well, it’s not totally unexpected; and as Gordon does so love to say, “Welcome to how the world really works” … Jim W. Dean ]
– First published … October 04, 2018 –
A US-funded biomedical laboratory in Georgia may have conducted bioweapons research under the guise of a drug test, which claimed the lives of at least 73 subjects, the Russian Defense Ministry said in a statement.
The question of what really might have taken place at the secretive US-sponsored research facility hosted by Russia’s southern neighbor was raised by the Russian military on Thursday after they studied files published online by a former Georgian minister.
The documents record the deaths of 73 people over a short period of time, indicating a test of “a highly toxic chemical or biological agents with high lethality rate,” said Igor Kirillov, commander of the Russian military branch responsible for defending troops from radiological, chemical and biological weapons.

US-FUNDED MEDICAL FACILITY IN GEORGIA COULD BE A COVER FOR BIOWEAPONS LAB USED FOR DISTURBING EXPERIMENTS THAT BANNED IN US HTTPS://ON.RT.COM/9EDR

SHROUDED IN MYSTERY, A US-FUNDED MEDICAL FACILITY IN GEORGIA COULD BE A COVER FOR A BIOWEAPONS LAB USED FOR DISTURBING EXPERIMENTS THAT BANNED IN THE US, A GEORGIAN EX-SECURITY MINISTER HAS CLAIMED….

KIRILLOV APPARENTLY DOUBTED THAT THE TESTS, CARRIED OUT BY THE RICHARD LUGAR CENTER FOR PUBLIC HEALTH RESEARCH NEAR THE GEORGIAN CAPITAL TBILISI, INVOLVED CLINICAL TRIALS OF A DRUG CALLED SOVALDI, WHICH IS MEANT FOR THE TREATMENT OF HEPATITIS C.

The producer of the drug is Gilead Sciences, a California-based biomedical firm that recruited former US defense secretary Donald Rumsfeld as a board member in 1988, in between his two tenures as head of the Pentagon.

“The documents showed many lethal outcomes among the patients. Despite the deaths of 24 people in December 2015 alone, the clinical trials were continued in violation of international standards and the wishes of the patients,” Kirillov claimed. “This led to the deaths of 49 more people.” 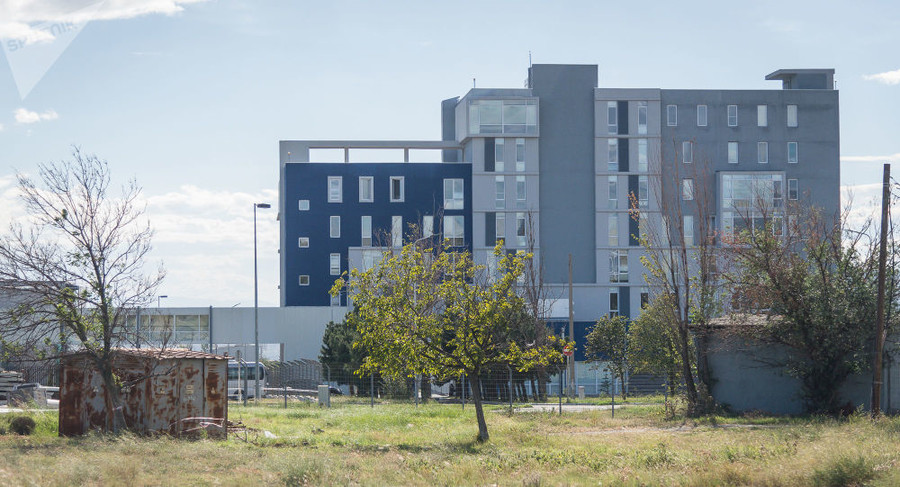 The large number of deaths stands in stark contrast to the actual documented use of Sovaldi in Russia, where no deaths have been linked to the drug, the Russian official stressed. Kirillov added that the US has a long record of unethical testing on human subjects in foreign countries.
The Russian official said the new documents “allow us to take a fresh look” at outbreaks of African swine fever in southern Russia in 2007-2018, which “spread from the territory of Georgia into the Russian Federation, European nations and China. The infection strain in the samples collected from animals killed by the disease in those nations was identical to the Georgia-2007 strain.” 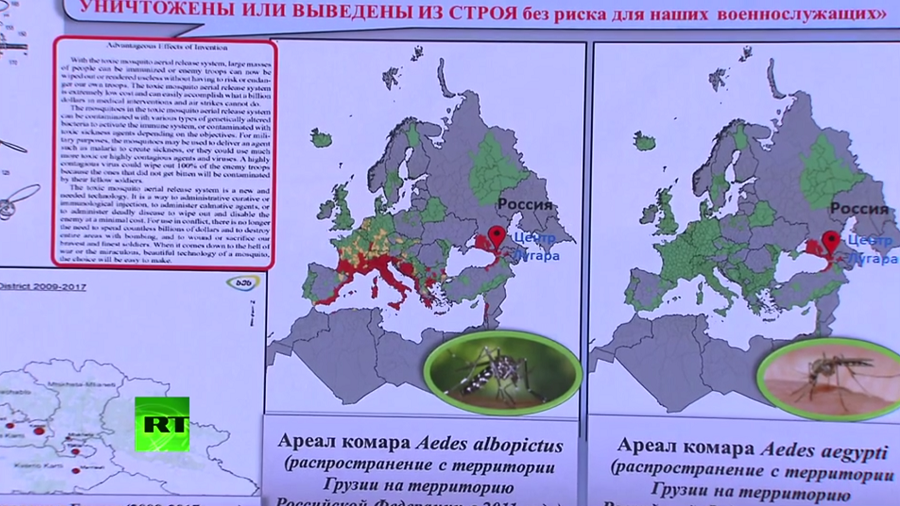 A slide showing the spread of disease-carrying mosquitoes from the Georgian territory into southern Russia, which the MoD says could be re-examined in light of the revelations.

The general said the Lugar Center in Georgia is simply part of a large network of Pentagon-controlled laboratories involved in WMD research, which was established in countries neighboring Russia. Part of the research is meant to establish infections that would be particularly resistant to vaccination and treatment, and effectively spread in the environment of the places in which the labs are located, he said.
Russia will take “diplomatic and military action” in response to a perceived threat from US labs, said Vladimir Shamanov, head of Russian parliament’s Defense Committee. He was commenting on accusations by the Defense Ministry. “We cannot simply turn a blind eye to things happening near our southern borders that directly affect our safety,” he told TASS news agency.