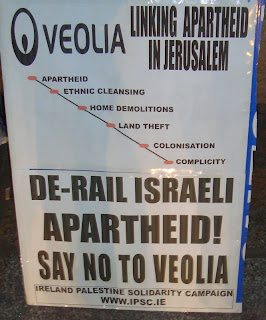 A mixed bag from Ireland last week. First the good news – Dublin City Council has voted unanimously to boycott Veolia, the company running a tramline through East Jerusalem to connect the illegal settlements to West Jerusalem.
This isn’t, mind you, as impressive as it initially sounds – Veolia won’t be stopped running the Dublin tram system and they are still in contention for the white elephant that is the metro line through North Dublin (Metro North). Irish local government is fairly powerless and the Dublin city council vote should be seen as an advisory opinion, albeit one with democratic weight behind it.
Nevertheless the success is real. It will be difficult for Dublin City Council to do business with Veolia and we’re investigating whether the City Manager is legally able to refuse Veolia any further contracts. With this vote in our back pocket we can go to the RPA (rail procurement agency) and lobby for Veolia not to be given the Metro North project. Thus this vote serves as a strategic milestone in the ongoing IPSC campaign on Veolia.
In addition, the wider picture is that boycott has been further mainstreamed. With every faction in the city council – right, left and none of the above – voting in favour of a quite technical boycott motion, the BDS campaign has been legitimised like never before.
We’re particularly pleased because this decision was made after months of hard work by the IPSC – liaising with the Palestinian BNC who sent an appeal to all councillors, chatting to those local councillors who were unsure about the motion, holding bi-monthly demos, leafleting and issuing press releases and so on. It’s satisfying to have a positive concrete outcome to this type of campaign, a milestone we can move beyond.
In being strategic, in forcing the pace as well as in winning there’s a contrast between this campaign and last week’s failure – Israeli accession to the OECD. It looks almost inevitable now that Israel will be accepted as a member of the OECD, possibly with some conditions that nobody seriously expects the apartheid state to adhere to.
It was hoped that Ireland would exercise its veto in the OECD and refuse the legitimacy that apartheid has now received. Yet even though some Irish NGOs had been doing good work and quietly lobbying for months on the issue, the hopes were frankly unrealistic and perhaps should not have been raised. Were other countries to object, no doubt little Ireland would row behind them. But it was too heavy a load to expect a small bankrupt country to pull by itself.
Nevertheless in the last couple of weeks there has been some frenetic campaigning to mobilise the public to oppose Israel’s membership of the OECD – various NGOs including Trocaire (an Irish aid agency linked to the Catholic Church) urged the public to lobby the govt on the issue. Over a dozen public representatives – including ones from government parties – wrote a public letter opposing Israeli membership, there was a Labour Party demonstration on the issue.
Even the PA got involved, albeit indirectly. Sadaka, a small lobby group linked to the Palestinian Delegation in Ireland, followed in Trocaire’s footsteps and urged people to contact the government on the issue, indicating that even if the PA weren’t openly opposing Israeli accession, they were doing so privately.
Yet while IPSC joined in, circulating the Trocaire appeal and one of our own, there seemed something slightly directionless and unstrategic about all this effort. Indeed, nobody I spoke to in other organisations expected their efforts to succeed. After all, when it comes to a technical issue such as this, you can’t realistically mobilise a popular campaign in a couple of weeks that would be big enough to force a shift in government policy. This meant that the campaign, such as it was, appeared reactive, short-term and somewhat unrealistic – a case of going through the motions and laying down a marker rather than serious trying to effect change.
I don’t want this to sound too much like condemnation. Sometimes we need to go through the motions and lay down markers. Every year we stand and protest Israeli Independence Day – it’s important not to let this go by without voicing our objections. Equally it was important not to let the OECD vote pass without letting our objections be known. But we need to strategise more so as not to give the impression of being headless chickens – well-intentioned and well-informed headless chickens, mind you.
Contrasting Veolia and OECD, I find myself repeating clichés – that working on seriously on long-term campaigns of our own choice means that we can start winning the small but significant victories, something that energises us and lets us feel that victory is possible.
It also creates a climate that normalises boycott. But sometimes clichés need to be repeated – especially for those who are downhearted at the OECD failure. Until we do much more of this long-term campaigning and put in the legwork which will build up that groundswell of support for BDS we can’t really hope to win the big victories like OECD. One day though – we will.
Posted by David L @ 2:22 PM Comments
See: www.jewssansfrontieres.blogspot.com