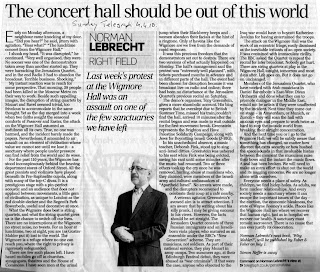 The Debate Continues
Throughout this affair of the Boycott of the Jerusalem Quartet, there has been one consistent argument on behalf of the Jerusalem Quartet. Two of their members play in Daniel Barenbom’s
WEDO, which was co-founded by Edward Said.Now I disagree on principle with these type of organisations. They are the gloss on Apartheid and in fact similar organisations did exist in South Africa. They are based on an acceptance of the status quo. That is their starting point.
The existing laws and regulations, the ongoing evictions of Arabs in Jerusalem are taken for granted. WEDO and such organisations are ‘non-political’ which means it challenges nothing.Instead they take as their starting point the idea that the reason for the conflict between Israelis and Palestinians is that both groups, for some unfathomable reason, have got it in their heads that they don’t like each other. And that, not society, not laws, not structures, is the cause of the conflict. Get everyone to talk to each other and all will be solved!
It is pathetic and puerile because at the end of the day the Arab goes back to his home and lives in fear of a knock on the door from a settler ‘reclaiming’ his home whereas the Israeli Jew goes back to his home without any fears.Far from being radical such organisations serve to reinforce the existing structures of Apartheid by legitimising them.
Hence the Jerusalem Quartet can play quite happily for an Occupation Army that detains pregnant Palestinian women at check points until their baby is dead and on the other pop in to WEDO to enhance their credentials.
Ah, I hear you say, but Edward Said helped found WEDO. Well let us be blunt. Edward Said wrote a brilliant book Orientalism but when he helped found WEDO had had clearly forgotten that such ‘dialogue’ groups are part of Western Orientalist practice.
Secondly for most of his life Said, an American Professor, was very much on the right-wing of the Palestinian movement. In many ways Said was the embodiment of Shakespeares saying about Macbeth that ‘Nothing became his life so much as his leaving of it.’Said’s reputation politically was cemented, after years of supporting a 2 State solution, by his opposition to Oslo. In that he was undoubtedly right.
He could see, unlike the corrupt Arafat and henchmen that Oslo could not be other than a continuation of Palestinian oppression. But his founding of things like WEDO were, in retrospect, a grievous error although it is understandable that he wanted to reach out to someone like Barenboim who, unlike the Jerusalem Quartet, understood that the founding of the Israeli state included the Nakbah.
I also include a nasty little article in yesterday’s Sunday Telegraph and the letter from Jews for Boycotting Israeli Goods from Deborah Fink and myself in today’s Independent.
Tony Greenstein@
www.azvsas.blogspot.com