As the word “apartheid” grows in popularity to describe Israeli oppression of Palestinians it is helpful to revisit another concept defined in the mid 20th century: genocide. 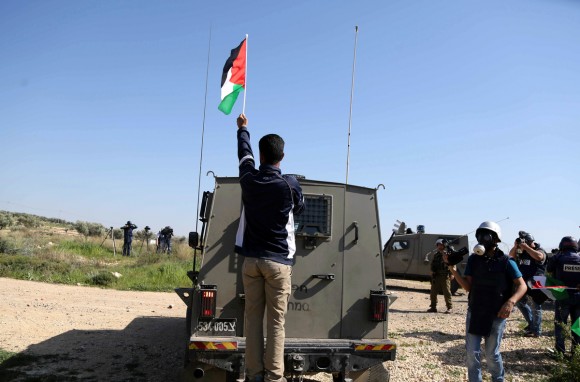 A PALESTINIAN MAN PUTS A NATIONAL FLAG ATOP A VEHICLE OF ISRAELI SECURITY FORCES DURING CLASHES FOLLOWING A MARCH ON FEBRUARY 19, 2016 IN THE WEST BANK VILLAGE OF BILIN, NEAR RAMALLAH, TO MARK THE 11TH ANNIVERSARY OF THEIR UPRISING AGAINST THE BUILDING OF ISRAEL’S CONTROVERSIAL SEPARATION BARRIER AND THE CONSTRUCTION OF ISRAEL SETTLEMENTS. (PHOTO: SHADI HATEM/ APA IMAGES)

In September as House representatives voted on allowing $1 billion to be sent to Israel for its Iron Dome defense system, Rep. Rashida Tlaib took to the floor to oppose the remittance on the grounds of not supporting an “apartheid regime,” to many of her colleagues’ chagrin. “Not my words, the words of Human Rights Watch,” she explained, holding up a copy of “Threshold Crossed: Israeli Authorities and the Crimes of Apartheid and Prosecution,” a recent report from the group that accuses Israel of practicing “apartheid.”

Although the report itself admits there is no such concept or legal definition of an “apartheid state,” it exhaustingly details policies and actions taken by Israeli authorities that could be described under international law (if there had ever been a court case to do so) as “apartheid.” Indeed, the injustices described in the report, from the dispossession of Palestinian land to frequent police violence, are egregious.

The term “apartheid,” coming from the Afrikaans word for “apart,” has taken on a new life outside of its South African origins, even having its own convention in 1973. The term has been flirted with in the Israeli-Palestinian conflict before. Former President Jimmy Carter was one of the first mainstream politicians to warn against the trend in the 2006 book, “Palestine: Peace not Apartheid.” Even the late Israeli Prime Minister Yitzhak Rabin mentioned the possibility of “apartheid” in Israel in 1976.

In order to prevent further complicating an already messy conflict, it might be useful for us, in the interest of conflict resolution, to take a few steps back from here to revisit another concept defined earlier in the 20th century by Polish Jewish lawyer Raphael Lemkin: genocide.

Lemkin spent decades studying cases of mass murder of ethnic groups and other events of persecution in an attempt to create a general and applicable concept for the international community to use in the prevention and punishment of such crimes. He came up with a set of criteria constituting genocide that includes direct violence and structural processes but all of which were aimed at destroying a national, religious or racial group. He also provided us with a sociological angle for understanding genocide as well. In 1944 he wrote:

“more often [genocide] refers to a coordinated plan aimed at destruction of the essential foundations of the life of national groups so that these groups wither and die like plants that have suffered a blight. The end may be accomplished by the forced disintegration of political and social institutions, of the culture of the people, of their language, their national feelings and their religion. It may be accomplished by wiping out all basis of personal security, liberty, health and dignity. When these means fail the machine gun can always be utilized as a last resort. Genocide is directed against a national group as an entity and the attack on individuals is only secondary to the annihilation of the national group to which they belong.”

For Lemkin, genocide does not just involve physical killings. Genocide also constitutes cultural, social, political, religious, moral, and economic attacks against a particular group and if tolerated, legitimizes the idea that one nationhood has the right to attack another in the belief of superiority, going against the enlightenment ideal of human equality.

The apartheid definition described and utilized in the Human Rights Watch report pulls from two definitions from the Apartheid Convention and 1988 Rome Statute of the International Criminal Court and is composed of three elements: 1) intent to maintain a system of domination by one racial group over another, 2) systematic oppression by one racial group over another, and 3) one of more inhuman acts, as defined, carried out on a widespread or systematic basis pursuant to those policies.

What contrasts this definition with Lemkin’s definition of genocide is the use of the word “domination” as opposed to “destruction.” In order to understand the case of Israel and the occupied Palestinian territory, we have to understand that the ideology of Zionism today inherently prohibits any kind of coexistence in Israel between Palestinian Arabs and Israeli Jews, even one of racial domination. Although some Zionists prior to 1948 believed that either coexistence or a peaceful transfer of Palestinians from the would-be Jewish state was possible, the Zionism of the post-war era no longer holds as a tenet that Palestinians could exist within the borders of a Jewish state at all and has steadily inched its way into Palestinian territory at various moments in the conflict.

Although Israel regularly engages in asymmetrical violence against Palestinians, casualty metrics alone do not prove that Israeli actions towards Palestinians could be defined as genocidal. In order to prove that the intention of Israeli authorities and settlers is the destruction of Palestinians as a population group and as a society, one does not have to look much further than current Israeli laws (“Judaization” as an official policy for Israel and the West Bank and government officials’ statements regarding Palestinians.

The Human Rights Watch report claims that “Not all policies designed to promote Judaization constitute rights abuses,” which is true enough, however, does it not still prove that Israel intends to destroy Palestinian Arab society in favor of a Jewish one?

Many scholars have interpreted different colonial projects and actions as genocidal in character at certain moments. A. Dirk Moses argues, at various points in the Australian colonization, British actions against the Aboriginal peoples could qualify as genocidal. Genocide scholar Martin Shaw wrote a comparative examination between the Israeli-Palestinian conflict and accepted examples of 20th-century genocide in a piece in which he concluded that the term can most aptly be applied to the specific case of the 1948 “Nakba.”

In order to make these arguments, scholars have to analyze the settler colonial projects and ideologies themselves, even as they change and adapt over time, in order to establish the intent at the destruction of a certain ethnic identity. Even when colonial projects begin “innocently” or “accidentally,” it is undeniable that the effects they have on native populations are nothing short of destructive, regardless of the degree to which the native population manages to survive.

However, the Zionist project is not another garden-variety settler colonial project. Zionism brought European Jews from all corners of the continent to a “homeland” many of them had never even visited in order to establish a local homogenous population, from the upper ruling class to the lower working class. Zionism had no purpose for a lower racial class of Arabs serving a colonial power because Israel’s colonial power is effectively non-existent, and the need for a purely Jewish population has always been essential for the Zionist project. Even the colonial projects which at least claimed to offer the option of assimilation into the dominant nationality for the native population resorted to genocidal actions when they did not oblige. How does this bode for a country whose allegiance to an inherently racially exclusive ideology comes at the expense of decades and decades of conflict?

The key difference between settler colonial projects in the past and the Zionist project of today is that settler colonial projects were technically liberal, enlightenment projects that believed, or purported to believe, that through proper leadership and guidance from the colonizing group, native populations could assimilate into a superior way of life that the colonizers made possible for them.

Apartheid can be a helpful tool to understand how Israel treats Palestinians in the twenty-first century. The report, drawing on data from the past century summarizes much of these abuses well:

“Collectively, these policies and practices in the OPT severely deprive Palestinians of fundamental human rights, including residency, private property, and access to land, services, and resources, on a widespread and systematic basis. When committed with discriminatory intent, on the basis of the victims’ identity as part of a group or collectivity, they amount to the crime against humanity of persecution under the Rome Statute and customary international law.”

In this vein, we can view Lemkin’s idea of genocide as a spectrum of ethnic persecution, all pursued with the intent to destroy an ethnic group. Palestinians as a group represent a threat to modern Zionists’ goals for Israel, and the report outlines the ways in which Israeli authorities attempt to defeat this threat, which clearly constitutes “a conspiracy to exterminate national, religious or racial groups. The overt acts of such a conspiracy may consist of attacks against life, liberty or property of members of such groups merely because of their affiliation with such groups,” according to Lemkin.

Differentiating between apartheid and genocide in the Israeli case is not just a risky semantic move that has no implications for a possible resolution to the long-standing conflict with Palestinians. To recognize that Zionism as an ideology is unique from other 20th-century settler colonial projects is a crucial part of understanding the politics of the peace process. The Zionist project itself has proven to be incompatible with a peaceful solution with Palestinians, who long ago refused to surrender their homeland and national identity. Zionism has had to utilize apartheid and other genocidal policies more widely in order to create an ethnocracy in a geographic region that already had its own indigenous population.

Furthermore, Israel’s ethnocratic aspirations prove that apartheid is not a feasible end goal for Zionists, and it certainly is not even an acceptable pit stop for its critics. In order to see an end to the conflict, Israel would have to abandon its current Zionist ideological goals of an exclusive and ethnocratic state and evolve to be a more liberal democracy. It would have to accept all of its inhabitants as citizens and strive to provide them with as many rights as the most privileged in their society enjoy. This would be similar to the processes other former colonies of the  20th century were required to do.

Although it may be true that the goals of the original Zionists may not have been to partake in practices that resulted in the destruction of Palestinian society, the realities on the ground since World War II have shown otherwise. As Lemkin theorized, “most often” the pernicious practice of genocide “does not necessarily signify mass killings.” “Most often,” he argued, genocide is the “destruction of the essential foundations of the life of national groups so that these groups wither and die like plants that have suffered a blight.”