BBC’s Panorama failed yesterday in its attempt to cover the Israeli Massacre on the Mavi Marmara. ‘Death on the Med’ is an exemplary work of clumsy journalism. It broadcasted video footage stolen  from peace activists on board. It repeated Neocon terminology by referring to Islamic driven political activism as ‘Islamism’.
It promised to provide some new evidence. But, instead, it recycled footage presented by the Israeli military that has long since been proven (and admitted as) faked.

To read and watch the videos:
http://www.gilad.co.uk/writings/gilad-atzmon-bbc-panorama-an-exemplary-work-of-clumsy-journa.html
2. A beautiful gift from the BBC by Ken O’Keefe 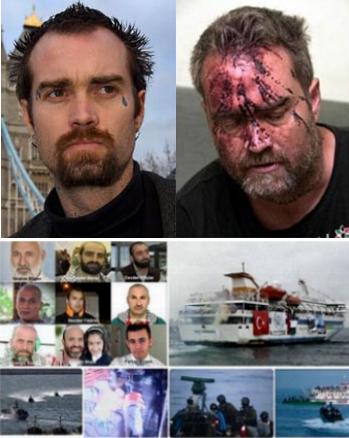 If you haven’t seen it, look for BBC Panorama’s “Death in the Med” program online, you will be treated to first class propaganda as only the BBC can deliver.
I am one of the passengers/witnesses interviewed for this program and I am very much aware of BBC’s role in justifying war and covering up Israeli crimes.
I am in no way naive about this; to the contrary my motivation for the interview lay largely in the all too likely opportunity to expose the BBC. A relevant job considering the BBC’s role in the slaughter of over one million Iraqi’s, a direct role by virtue of the war they justified. BBC from start to present, justifying Iraq, a massive war crime and crime against humanity based entirely on lies (propagated intensely by the BBC).
To read more:
http://uprootedpalestinians.blogspot.com/2010/08/beautiful-gift-from-bbc-by-ken-okeefe.html