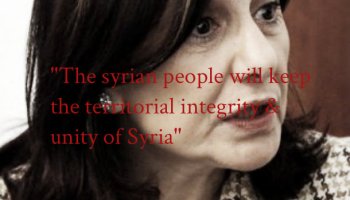 This is the sort of underhanded, corrupt bribery and manipulation that Washington and its NATO and Gulf partners routinely engage in when working to undermine, and eventually destroy a sovereign nation state like Libya or Syria.

Political and media adviser for the President Bashar al-Assad of Syria, Dr. Bouthaina Shaaban addressed the National Press Club in Washington DC via Skype, Thursday, regarding the Syrian government’s position on the current situation in the country.

Thanks to Eva Bartlett for the transcript of the first part of Dr Shaaban’s speech to GAFTA June 2nd 2016:

“This leads me to question the false narrative that has been circulated also all over the world, but particularly in Western countries, about events in Syria.

Since March 2011, Al Jazeera–that is owned and funded by Qatar–and Al Arabiya TV–that’s owned and funded by Saudi Arabia–have been the major source of information about Syria. Although, for your information, both Al Jazeera and Al Arabiya withdrew their correspondents right from the very first two months of the war on Syria. And they started to rely on what they call “eye witnesses”.

The same thing applies to the Observatory for Human Rights (SOHR) which also has been a major source for Western media. I don’t know how many of you know that only one person, Rami Abdul-Rahman–who lives in Coventry, England–is the one who is providing all this information about Syria.

…Western media, whether inadvertently or deliberately, truly ignored what is happening in Syria,  throughout these five years, and relied on regional partners and regional outlets who are essential in targeting Syria.

…The false narrative and the media have been used by our adversaries in the region in order to misinform Western audiences. Therefore, how can Western people know what’s going on in Syria, and how can they question their governments about their stand towards Syria?…”