After Israeli snipers killed 40 Palestinians in 3 months, army chief said, ‘This is not right, relax’

After Israeli soldiers killed more than 40 Palestinians ‘easily’ in 2 months, the army chief of staff said, “This is not right” and ordered snipers to “relax.” But when reporter Ohad Hemo related this incident to the Israel Policy Forum, chair Susie Gelman just raised her concerns about the Palestinian prisoners escaping an Israeli prison. 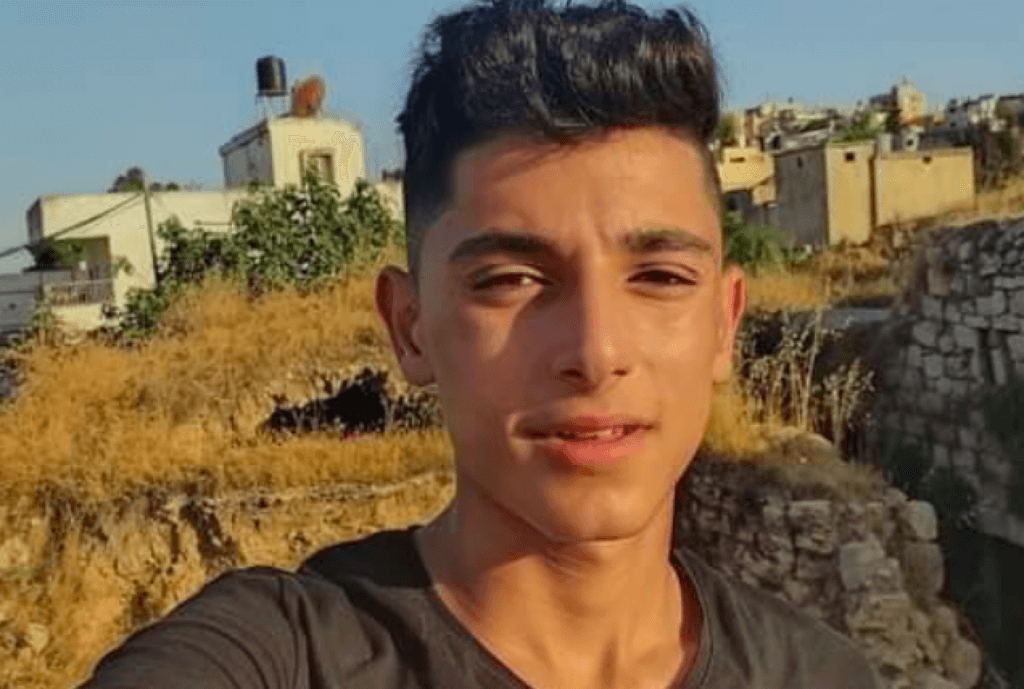 AMONG THE 40-PLUS PALESTINIANS KILLED “EASILY” IN THREE MONTHS IN 2021 WAS 16-YEAR-OLD AHMED SHAMSA, SHOT IN THE HEAD DURING A PROTEST IN JUNE 17 IN THE OCCUPIED WEST BANK VILLAGE OF BEITA. (PHOTO: SOCIAL MEDIA)

A pro-Israel group held a discussion three days ago that showcased its utter indifference to Palestinian lives. Israeli reporter Ohad Hemo told the Israel Policy Forum, an American Israel lobby organization, that after Israeli soldiers “easily” killed more than 40 Palestinians in the West Bank in two months, the army chief said, “This is not right,’ and ordered snipers to “relax.”

Susie Gelman, the chair of the Israel Policy Forum, had no response to the shocking report, but turned the discussion back to her “cause for concern” — Palestinian prisoners escaping an Israeli prison.

Here is Hemo’s description of the killing spree:

Something happened in the last few weeks in the West Bank. I can tell you that during the last two months, there were over 40 Palestinians who were shot dead by Israel. And we reached a point that the chief of the army, he called all the commanders working in the West Bank and told them, Wait a minute, This is not right. I mean People are being killed easily in rallies, in demonstrations or whatever. So please talk to your snipers. Talk to your people in the IDF. Just to, Relax them.

Hemo, the Palestinian affairs reporter for Israel’s Channel 12, was expanding on a news report of August 10. After Israeli soldiers had killed more than 40 Palestinians in three months, including “non-combatants… killed by mistake,” Aviv Kochavi, chief of staff of the Israel Defense Forces, demanded changes.https://www.youtube.com/embed/DvfeCuH3grk?feature=oembed

The Israel Policy Forum plainly doesn’t care about these killings. It was holding a discussion about the Sept. 6 prison break in which six Palestinians tunneled out of Gilboa prison, and Gelman, who was interviewing Hemo, repeatedly expressed concern about the “ramifications of this significant security breach.”

“Tell us about these six prisoners,” Gelman said. “I mean, this kind of thing just shouldn’t happen. There are obviously a lot of questions and clearly there is going to be an investigation of what went wrong… How is this even possible? … It’s likely people will lose their jobs because of this.”

Hemo said, “Four of them are convicted to life sentence, for killing Israelis or taking part of terror attacks… Mahmoud al-Arda is a killer, believe me, he is a real terrorist from the Islamic Jihad.” (al-Arda and three other escapees were recaptured. Two remain free.)

Hemo repeatedly described Palestinians as terrorists. None of the 4500 Palestinians prisoners held by Israel are political prisoners, Hemo said, they are all “terrorists.”

“We are talking about right now 4500 prisoners sitting in Israeli prisons. I wouldn’t say political prisoners, I would say terrorists.”

Gelman and Hemo never addressed the obvious question: Have there been any consequences for the Israeli killers of the 40-plus Palestinians. The answer is surely No. The human rights group B’Tselem has documented that only “in very rare instances” are Israeli soldiers charged criminally for killing or injuring Palestinians. And when charged, they are rarely convicted. By contrast Palestinians in the West Bank face a conviction rate of nearly 100 percent in military courts– which is one reason that Human Rights Watch said in April of this year that Israel practices apartheid.

Hemo will appear next month at another pro-Israel organization.