The Meaning of David Cameron posted by lenin 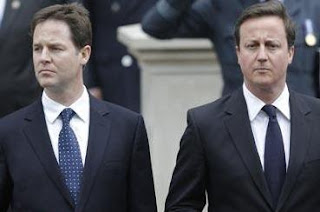 Well, well. That’s the liberals’ progressive reputation finished, along with their ability to take Labour heartland seats. And you’ll have to buy my bloody book now, won’t you? If you want to get a copy and hear me talk about the scum – no offense intended – who have just taken over, come along to this:

Richard Seymour, blogger of ‘Lenin’s Tomb’ fame, and author of ‘The Liberal Defence of Murder’ will be in store discussing his latest publication, ‘The Meaning of David Cameron’.
The Tories are posing as a ‘progressive’ and ‘radical’ alternative to New Labour. Drawing from George W Bush’s ‘compassionate conservatism’, they maintain that the ‘Big Society’ can do what ‘Big Government’ cannot – produce a cohesive, mutually supportive, happy society. Cameron’s court intellectual, Philip Blond, maintains that this is a viable alternative to the failures of the egalitarian left and the excessively pro-market right. But is this more than campaign mood music?
And are the conservative traditions that they draw on – from the bucolic, pseudo-medievalism of G K Chesterton to the anti-statism of Friedrich Hayek – really a bulwark of progress and radicalism?
Richard Seymour argues that such ideas can only seem ‘progressive’ in light of New Labour’s acquiescence to Thatcherism. To understand the Cameronites, it is necessary to understand how the social landscape and corresponding political language was transformed by the collapse of post-war social democracy and its more radical competitors.
To resist the Cameronites, he argues, it is necessary to attack the neoliberal consensus on which all major parties found their programme.