Jen Psaki said the Biden Administration “regrets the intrusion into what should have been a peaceful procession” but didn’t condemn Israeli police violence at Shireen Abu Akleh’s funeral in Jerusalem. 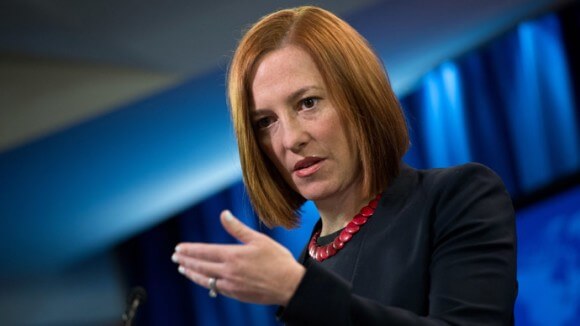 On her last day as White House press secretary Jen Psaki was asked about Israeli police beating mourners with batons at the funeral procession for Shireen Abu Akleh. Abu Akleh, a Palestinian-American journalist and veteran correspondent at Al Jazeera, was shot dead by Israeli forces while reporting on a military raid in Jenin on Wednesday.

“I would say first that we’ve all seen those images, they’re obviously deeply disturbing,” Psaki told reporters. “This is a day where we should all be marking, including everyone there, the memory of a remarkable journalist who lost her life…with the disturbing footage from the funeral procession today in Jerusalem, we regret the intrusion into what should have been a peaceful procession. We’ve urged respect for the funeral procession, the mourners, and the family at this sensitive time.

Alex Marquardt@MarquardtA No condemnation of Israeli police’s actions in Jerusalem today from the White House. @PressSec: “deeply disturbing images…We regret the intrusion into what should have been a peaceful procession.” She “urged respect” of mourners and family.6:53 PM · May 13, 2022

“We’re also in close touch with Israeli and Palestinian authorities,” she continued. “We have been, and will continue to be, especially with the images we saw today. We’re not currently involved in the investigation, but we are working to bridge cooperation and available to provide assistance as needed.”https://www.youtube.com/embed/vpuxi26IA6Q?start=1474&feature=oembed

When asked if Biden will speak directly with the Israeli government about the killing Psaki said, “We have been engaged with them and have offered support and if they need specific support from us we will provide that.”

Some U.S. lawmakers, like Vermont Senator Bernie Sanders, have called for an independent inquiry into Abu Akleh’s death. However, the Biden administration has made it clear that they support Israel running its own investigation. Yesterday State Department spokesman Ned Price said that “the Israelis have the wherewithal and the capabilities” to be “thorough” and “comprehensive.

Axios’s Barak Ravid reports that their is “anger and frustration” among some Biden officials over the violence, but so far this emotion hasn’t added up to any discernible action or calls for Israeli accountability. During the same briefing Price was asked whether Israel was justified in bombing Associated Press’s Gaza office a year ago, but refused to condemn the attack.

The Biden administration also currently opposes multiple United Nations investigations into Israeli human rights violations and potential war crimes in Palestine. “We have concerns with the council,” said Price last year. “We will vigorously oppose the council’s disproportionate attention on Israel, which includes the council’s only standing agenda item targeting a single country.”