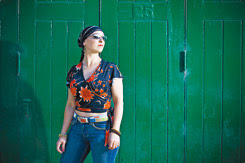 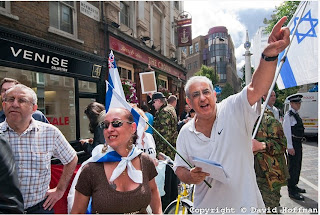 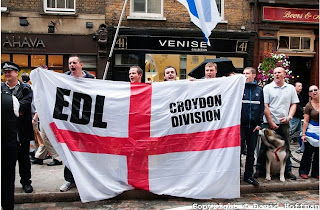 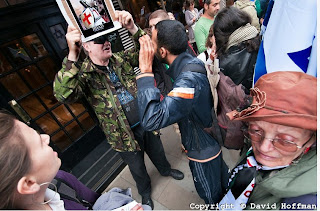 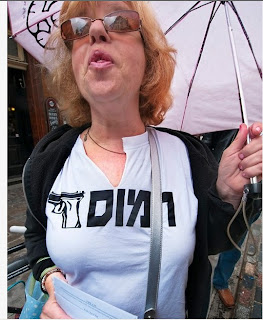 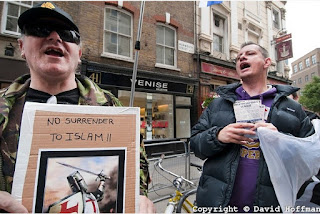 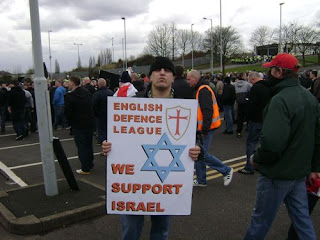 Photographs are from Robert Hoffman

I know Harold Wilson once said that a week is a long time in politics and 10 weeks must seem like an eternity, but one would have thought that one’s principles might last a little longer. But then again, demonisation of Muslims and the Palestinians and unqualified defence of Israel, right or wrong, are the only principles that Jonathan Hoffman, esteemed co-Chairman of the Zionist Federation, holds to.

On 3rd June Jonathan Hoffman was spluttering with outrage on this blog at the accusation that he had co-organised a demonstration with the English Defence League. And naturally I gave him enough rope to hang himself with. Indeed in the interests of fairness I amended the article as there was no proof that it had actually been jointly organised by the Zionist Federation and the EDL. This was the Zionist demonstration in support of the murder of 9 activists aboard the Gaza Freedom Flotilla.

Hoffman was emphatic. In particular he denied telling reporter that ‘‘there was no proof of any link with the BNP.’’ On the contrary, he wrote that: ‘That is wrong. I never said that. I said that there was crossover between the EDL and BNP and that therefore the EDL were not welcome.’

‘In so far as there was a ‘crossover’ between the BNP and EDL he wouldn’t work with the latter.’ Presumably if the EDL had just confined themselves to attacking Muslims, and didn’t have any links with the BNP, they would be kosher. In response to my accusations Hoffman was clear:

Nowhere have I done that.  It was just ‘Another despicable ad hominem lie’ and it would appear that I have it in for JH personally!

Well there is a very good article by Shaul Adar in Ha’aretz entitled   ‘What are Israeli flags and Jewish activists doing at demonstrations sponsored by the English Defence League?’ It is a very good question, and one that Jonathan Hoffman, Co-Chairman of the Zionist Federation, has been doing his best not to answer these past few months. The Ha’aretz article is subtitled: ‘Call it a struggle against a common foe: Islam. Or a journey into the heart of darkness. Or perhaps further proof that Europe is starting to lose its mind again.’

It’s not that I haven’t tried to get Hoffman to answer a few questions about the EDL. I ran articles on the EDL attack on a Birmingham PSC stall, on the Zionist Federation counter-demonstration with the EDL outside the Israeli Embassy in June, where EDL members took part alongside their Zionist comrades, as well as more general articles and a report on Harrow where the EDL were repulsed.

I was even threatened with a libel action by Hoffman.

Well surprise surprise. At the regular picket of Ahava, the Israeli shop in Covent Garden which sells stolen ‘beauty’ products from the Dead Sea today, what do we find? Not only a joint Zionist Federation demonstration but Hoffman and the leader of EDL’s Jewish Division skipping down the road together and all but holding hands!

As John Junor used to say ‘You couldn’t make it up. Pass the sick bag Alice.’ Once again we see Zionists and outright racists holding hands against the common foe.
And to be fair, because I always try to be fair, Jonathan Hoffman in his comments, apart from the ritual abuse ‘Commissar Greenstein’ and ‘communist paradise’ doesn’t at all deny that he demonstrated ALONGSIDE the EDL. So now it’s quite clear, Jonathan Hoffman, Co-Chairman of the Zionist Federation in Britain is perfectly happy to demonstrate with fascists and racists. And far from trying to stop him I welcome this fact! It proves everything we’ve been saying.
Indeed so little has he to say that Roberta Moore of EDL’s Jewish i.e. Zionist Division tries to give him an alibi. Apparently ‘the EDL Jewish Division imposed our presence upon them, and they had no choice.‘ All I can say is that the pictures don’t lie. Hoffman seems positively ecstatic that Roberta is demonstrating alongside him. He doesn’t look imposed upon or henpecked to me!!