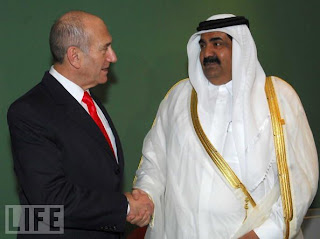 Qatar said yesterday that it was time to reconsider the Arab offer to normalise ties with Israel in return for its pullout from occupied Palestinian land. It also said the international Quartet attempting to broker peace between Israel and the Palestinians should be branded a failure. “It is logical after 10 years to objectively reconsider the peace process, including the Arab initiative,” said Sheikh Hamad bin Jassem Al Thani, the country’s prime minister.
He called for a “thorough look into developments in the region and the world, and to decide carefully on our future steps and road map.”Sheikh Hamad, who heads an Arab League follow-up committee, said the initiative tabled in 2002 by Saudi Arabia “will not be on offer for ever”.The Arab League had proposed a normalisation with the Jewish state in return for its pullout from occupied lands, notably the Palestinian territories.Palestinian leader Mahmoud Abbas told the meeting of Arab League ministers in Doha that he was opposed to a withdrawal of the Arab initiative.”It should stay,” he said. “It is a very important initiative. I hope that we would not talk every time about shelving it, because that would mean war.”Are we ready for war? Personally, I say I am not,” he added.