Below is an “interesting” screen shot of Muammar Gaddafi’s Green book, Chapter III, “The Social Basis of the Third Universal Theory”, also page 154 -156 from “the constitution of Libya”, which landed in my mail box. The sender commented in Arabic under the screen shot: “From the dementia of Gaddafi’s Green Book, may God save you, Libya !” On a page where the picture was posted, readers commented: “Infinitely smarter .. and with sharp insight … really …”,  “thoughts and deep reflections about God’s creatures and its own people, and philosophers”. Another comment about Gaddafi was: “Leader Muammar Gaddafi, is the king of the kings of Africa and the Middle East, the leader of the Ninja Turtles”. Given what is in this short excerpt of his Green Book, there is no surprise that people make fun of him.

I read and I translated Gadaffi’s words below. I can only say that these are

the words of a psychopath, and that his constitution and theories are worth less than the ink used to write them. I understand neither how this crazy person could lead Libya for decades, and how the Libyans accepted his green book as a constitution of their state, but I understand very well how and why the USA and other western countries supported Gadaffi and his criminality during the past 42 years. I am only astonished that the filthy collusion between the west and all thepathocracies in all Arab countries has taken so long to come out.

I have the strong impression that the answer to these rhetoric questions is that western regimes are themselves full-blown pathocracies, and that they support pathological specimens such as Gaddafi, Lieberman or Netanyahu because they regard them as “family”. 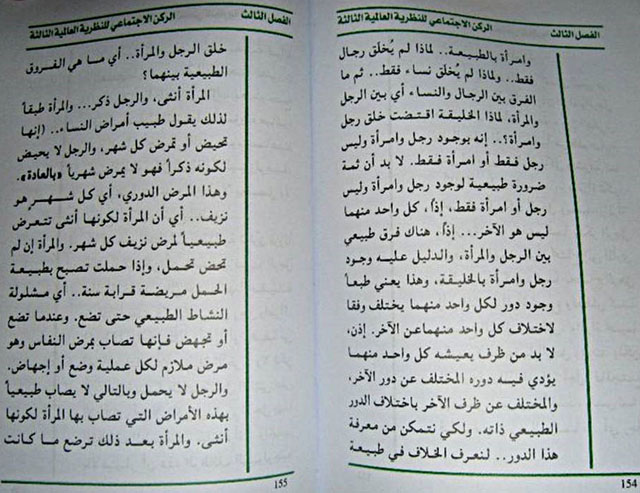 As a woman, I felt ashamed and offended by this insane “theory of man and woman creation, menstruation, and pregnancy”. Every child in primary school has better knowledge, education and understanding of these things than Gaddafi. I feel shame for the people of all the countries which have supported him after he published his “theories and constitution” which only bring shame to his country because it shows so well how crazy Gaddafi is. I suggest that the revolutionaries bury the shameful green book together with Gaddafi.

Here is the quote which I translated from Gaddafi’s book. Have fun with constitution of Lybia.

“…. Why not create men only? Why did he not create women-only? Then what is the

“Female is women, and male is man … And women according to the saying

of gynecologists (he did not say who the great gynecologist is!! it is his own imaginations) … “She menstruates or becomes ill each month, and men do not menstruate because they are male, man does not get sick monthly with “period”. This periodic disease means, every month there is bleeding. . so the woman because she is female is under a natural monthly disease of bleeding. And when the woman does not menstruate she becomes pregnant. If woman becomes pregnant she became naturally sick with about a year of pregnancy. Paralyzed of the normal activities until she gives birth. And when she gives birth or aborts, then she becomes infected of the “Nifass disease” (maternal disease) which is inherent in the processes of giving birth or abortion, and man does not become pregnant and therefore is not naturally affected with these diseases which infect women, because of being females. A woman after that gives breastfeeding to the child… the natural breastfeeding is two years. Therefore breastfeeding means that the woman accompanies her child and her child accompanies her, therefore her activities are paralyzed and she is directly responsible for another human being whom she helps in all biological functions, and without her he dies, and men do not become pregnant and give breastfeeding. The doctor’s explanation is finished.

“… Women who believe – including the woman herself – that she practices physical work by her own volition, in fact it is not like that. She does so only because the cruel materialistic society puts her in compelling circumstances without knowing (herself) this fact directly. No way for her, she is only to be subject to the conditions of the society while she believes that she operates freely… She is not free in the basic issue: There is no difference between men and women in anything.